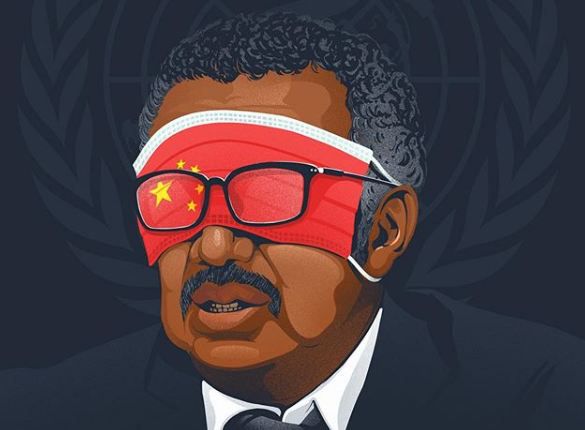 On November 2, the World Health Organization (WHO) held an online meeting and discussed several issues around their measures for the COVID crisis together with countries Spain, Korea, and South Africa, etc. On this event, the director Tedros Adhanom Ghebreyesus, together with Dr. Michael Ryan disclosed Tedros’ alleged exposure to a person who tested positive for Covid-19. The director announced on his Tweeter account:

“I have been identified as a contact of someone who has tested positive for COVID-19. I am well and without symptoms but will self-quarantine in the coming days in line with WHO protocols. At this time it’s critically important that we all comply with health guidance. This is how we will break chains of transmission, suppress the virus and protect health systems.”

But it seems strange that until now no one from the WHO or the media is talking about it anymore when it’s been a month already. Aren’t they supposed to update the public because perhaps, just for the sake of our assurance, he might be out mingling and infecting everyone? And what if he infected at least ten people and then each of those ten infected ten more and they still continue to infect more people to this day? That if, SARS-Cov2 really exists and the PCR test is really designed for testing o identifying an infectious virus exactly like what the official narrative of this whole circus is saying.

But the fact is… it’s not the case for both of these claims. SARS-Cov2 was never isolated, purified, and genetically identified and the PCR can never test for a viral disease. So for the people who know what’s really happening, this is nothing but a show and of course, another example of hundreds of these people’s hypocrisy and comical performances. Even a former Pfizer chief scientist who is also trained as biochemist and pharmacologist obtaining his PhD from the University of Surrey (UK) in 1988, Dr. Mike Yeadon, also strongly stated that “there is no need for Covid vaccines” because the “pandemic is over” has also clarified in an interview:

“You might think it’s looking for the virus but it’s not. What they’re looking for is a small piece of genetic sequence called RNA. Unfortunately, that bit of RNA will be found in people’s tonsils or nose not if they’ve just caught the virus and they’re about to get ill or they’re already ill.”

Meanwhile, another clown Dr. Michael Ryan also commented on this ridiculous drama by manoeuvring the wheel into boasting their projected capacity while also justifying a “rule” that’s really not what they are trying to impose and want the public to follow and undertake. While millions upon millions of people are now out of jobs and starts to struggle hard for economic meltdown and food insecurity, not counting those who already expired o gave up because of the current grim situation they themselves created, these people continue to ignore the cry and the clamour even from their own doctors and scientists who’ve already realized the nightmare they helped to enable. So Dr. Ryan just simply said Tedros is fine still working at home and that:

“The current protocols in WHO are that people who are determined to be contacts of a confirmed case are asked to quarantine for the period of time required. That is the standard protocol and that is the regime Dr Tedros is under right now.

His testing will depend on the arrival of symptoms or otherwise and he may be tested in the days to come but our current protocols don’t require that he be tested. He is at home in quarantine and, as you can see, very well and working away and continuing to do his job in supporting the world.”

Of course, the fiasco cannot be completed if the mainstream press remains quiet about a certain drama. As an example, Quartz Magazine immediately defended WHO’s hypocritical excuse for this issue. On one of its article, the lapdog blatantly stated another inconsistent lie:

“…No. There’s a real risk in getting tested without showing symptoms. As my colleague Katherine Foley has written, “SARS-CoV-2 takes a median of five days to make its presence known in the body; sometimes, it can take up to two weeks. If a person were to take a Covid-19 test too soon after being exposed, they’d get a false negative.” It’s possible that if someone takes a Covid-19 test too early after exposure, they’d assume a negative result means they aren’t infected, and go out into the world—potentially spreading the virus to others.

Even if an infected person waits long enough for the virus to incubate, a negative result still doesn’t guarantee they’re in the clear. The diagnostic PCR tests that most people take were designed to return a definitive diagnosis in symptomatic people—and there still isn’t strong data to indicate how accurate they are in people without symptoms.”

The public knows that this is not the case for ordinary citizens. Everybody knows that governments in many parts of the world are currently doing massive aggressive testing while also allowing companies to exploit the situation and take advantage of the amount that they can “suck” from the employees even though experts are protesting from all over Europe and the US and demand that this should end because the PCR, mistakenly declared as the gold standard for testing Covid, is not really meant for the purpose.

Yet, even Aljazeera reported Tedros’ alleged quarantine but still, as always, without questioning the irony and the hypocrisy. It’s not really forgotten that at the beginning the hypocrite Tedros Adhanom Ghebreyesus has stated:

“We have a simple message for all countries: test, test, test… test every suspected case, if they test positive, isolate them and find out who they have been in contact with two days before they developed symptoms and test those people, too.”

Of course, as always, the rules only apply to ordinary citizens and not for the major controllers of the game. Therefore, it must be important to listen to what Dr. Andrew Kaufman has said:

“…based on this fraudulent and worthless test, your rights have been compromised. The more testing that is done, the worse it has gotten and will get. You must resist and say no to the swab. Do not get tested or allow your children or your family to get tested. They control the game through testing. If they set the cycles high the number of positives will be high. Then they will order more lockdowns and other tyrannical policies.”