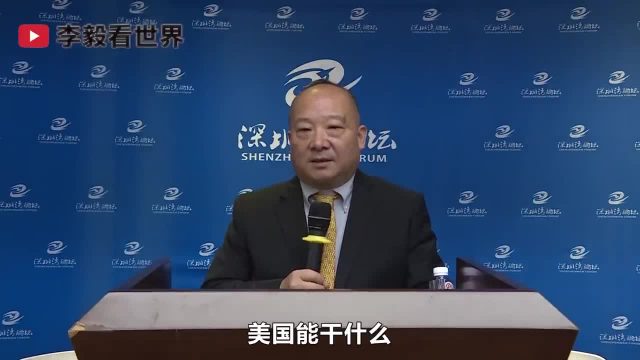 A Chinese sociologist, Dr. Li Yi, delivered what others may consider a disturbing speech last October 16, 2020 at the Shenzhenwan Dialogue Forum in Shenzhen, China; posted on his own Youtube account. According to his own Linkedin account, Dr. Yi holds a PhD in sociology from the University of Illinois and he’s currently “is a full-time professor at Renmin University in China”. Though, Renmin University issued a statement denying his employment at the university following his speech on the same day.

Dr. Yi spoke with full confidence that “Covid 19 is a test from ‘god’ and this “trick” has favoured China against Europe and the US because it allowed China to gain victory” over the two “western giants”. Dr. Yi has sought to” overtake the US in 2027” or a little further. According to him:

“The test is biased though. Covid 19 is bad for Europe and America but it is beneficial for North Korea and China. That’s why North Korea is number one in the global fight against the pandemic and China is number two. NK has zero infections, right? Zero infections. So this system can do it. Our system is good, but not as good as North Korea’s. We still have 4000 deaths right? But if 4,000 (Chinese) die versus 220,000 in the US, we haven’t really lost a single person, have we?”

The sociologist also immodestly claimed that “China stands out in the global economy and that they are much ahead of schedule” in the race compared to the US and that in 2027, the goal of totally defeating the US economically will be reached. He also spoke proudly about how the China is “driving America to its death” in terms of GDP as shown in the results in their “economy, trade, and the military” which, according to Dr. Yi, attained dominion over Taiwan Straight against the US and Japan starting in 2014.

It is known that China has sophisticated infrastructures when it comes to “crime control and war technology”. However, the not so known fact is that many of the military technologies China uses for their system are coming from or at least developed by American companies. And with this capability, China takes advantage of the world through its modernity even at the expense of its own citizens. Based also from Human Rights Watch group, axios.com reported:

“Based on interviews with 58 Uighur Muslims formerly living in the far west region of Xinjiang, HRW reports that the Chinese government is placing QR codes on houses to vacuum up information on residents into a scannable bite. The QR program is part of a larger picture in which Beijing is using Xinjiang as a petri dish for its newest surveillance technologies, says Sophie Richardson, China director at Human Rights Watch. Beijing has detained about a million Uighurs in political indoctrination camps and enacted a regime of DNA and voice data collection. The tech behind QR codes is simple, but in the context of surveillance, they allow authorities to access massive amounts of personal data in seconds.”

Regarding the US companies, axios.com then reported:

“Thermo Fisher Scientific, a Massachusetts company, has supplied the Chinese government with DNA sequencers that it is now using to collect the DNA of ethnic minorities in Xinjiang, Human Rights Watch reports. At a Thursday hearing, Sen. Marco Rubio called Thermo Fisher’s operations in Xinjiang “sick.”

iFlyTek is a Chinese company that recently launched a 5-year partnership with the Massachusetts Institute of Technology. Beijing has used iFlytek’s voice recognition technology “to develop a pilot surveillance system that can automatically identify targeted voices in phone conversations,” according to Human Rights Watch.”

This, perhaps, is the reason why Dr. Yi announced their projected superiority in a completely conceited manner. He added:

“We have gained absolute superiority over the US military. In the Bohai sea, the yellow sea, and the Taiwan Straight and we are expanding our military at a rate unprecedented in human history. We’ve been launching (fleets equivalent to the French Navy every year, for several years. One French Naval tonnage per year.  We will continue to launch the equivalent of a French Navy for at least the next decade.”

Dr. Yi, however, admitted that China is not yet powerful compared to American “education and technology”. What China can confidently “challenged” are the American hegemonies in the areas of “military, monetary system, and trade”, for “as long as 1.4 billion Chinese people go to work every day and continue their mundane lives”, they will “drive America to death”. Therefore, according to Yi, “China’s power and development cannot be resisted or stopped” for as long as it remains “loyal”. He said:

“As long as one thing doesn’t happen, as long as China doesn’t produce a Gorvachev who would mess up China’s own internal affairs and cause China to disintegrate, then nobody would be able to resist our development.”

Then he added by gesturing positively that “Americans are really panicking right now all the way from the academic sectors, to public officials, the industry and its military”. Dr. Yi also mentioned that “75% of Americans now hate China” so much and that it wishes for China to “collapse” because of its pressure to the US which we can all see happening and affecting large populations of ordinary American citizens. Lastly, Dr. Yi also said that the US “will do anything except engage in war or to severe diplomatic relations”.