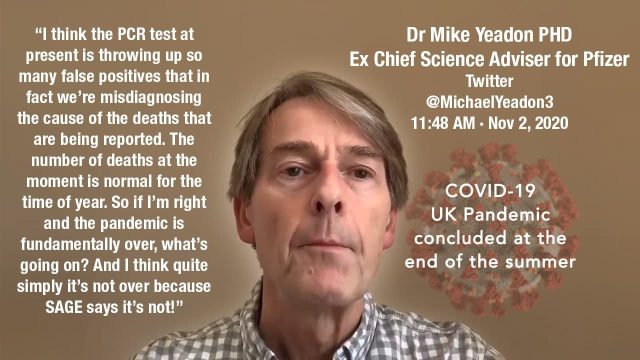 A website named “stoppfizer.org” has launched the campaign “Stop the Pfizer Vaccine” on December 1, a day before it was approved by the UK government in relation to a petition submitted by Dr Mike Yeadon, a former Pfizer chief scientists which expertise was moulded from decades of clinical experiences and Dr. Wolfgang Wodarg, a German expert who also took legal actions against the German scientists and MP’s during the 2009 fake H1N1 pandemic, which call for the suspension of COVID vaccine trials. The petition was addressed to the European Medicine Agency (EMA), the agency responsible for EU-wide drug approval.

The petition, according to the website, is “the most important scientific challenge to the vaccine and testing regimes established since January 2020”. It was also addressed to the Committee for Human Medicinal Products (CHMP), and COVID-19 EMA pandemic Task Force (COVID-ETF) in The Netherlands. Dr. Wodarg and Dr. Yeadon stated that the studies should not be continued until “a study design is available that is suitable to address the significant safety concerns expressed by an increasing number of renowned scientists against the vaccine and the study design”.

Dr. Yeadon and Dr. Wodarg claimed in the petition paper:

“The published RT-qPCR protocol for detection and diagnostics of 2019-nCoV and the manuscript suffer from numerous technical and scientific errors, including insufficient primer design, a problematic and insufficient RT-qPCR protocol, and the absence of an accurate test validation. Neither the presented test nor the manuscript itself fulfils the requirements for an acceptable scientific publication. Further, serious conflicts of interest of the authors are not mentioned. Finally, the very short timescale between submission and acceptance of the publication (24 hours) signifies that a systematic peer review process was either not performed here, or of problematic poor quality.  We provide compelling evidence of several scientific inadequacies, errors and flaws. Considering the scientific and methodological blemishes presented here, we are confident that the editorial board of Eurosurveillance has no other choice but to retract the publication.”

The first action requested by the group was:

“Stay the Phase III trial of BNT162 in the protocol country Germany and in any other EU protocol countries (as applicable) until study design is amended to provide that:

Before an Emergency Authorization/Conditional Approval and/or Unrestricted Authorization is issued for the Pfizer/BioNTech vaccine, all “endpoints” or COVID-19 cases used to determine vaccine efficacy in the Phase 3 or 2/3 trials should have their infection status confirmed by appropriate Sanger sequencing (as described in section C. III. below), given a) the high cycle thresholds used in some trials; and b) design flaws of certain RT-qPCR tests identical to or modeled after what is sometimes called the “Drosten-Test”.”

And the second is that:

“All “endpoints” or COVID-19 cases used to determine vaccine efficacy should have their infection status confirmed by appropriate Sanger sequencing (as described in section B. III. below), given a) the high cycle thresholds used in some trials; and b) design flaws of certain RT-qPCR tests identical to or modeled after what is sometimes called the “Drosten-Test”.

According to the petitioning group, the paper being submitted shows “numerous serious flaws in the Corman-Drosten paper” which has led to worldwide misdiagnosis and mis-labelling. Of course, it’s also coupled with incredible bribery to health professionals and politicians who committed themselves to protect the “official pandemic narrative”. These errors paved way for the possibility of unprecedented world systems that strengthens government control over public through weaponizing health and medicine, aided with enhanced military capacities and surveillance aided capitalism. The petitioning group then stated:

“We are confronted with stringent lockdowns which have destroyed many people’s lives and livelihoods, limited access to education and these imposed restrictions by governments around the world are a direct attack on people’s basic rights and their personal freedoms, resulting in collateral damage for entire economies on a global scale.”

There are reasons why people should be critical and careful about trusting Pfizer’s products. As records show, not so long ago Pfizer left a very unfortunate footstep in Nigeria where several children died due to the company’s experimental drug called Trovan. From 200 sick children selected to be the recipients by a team of Pfizer doctors who stationed themselves just metres away from the institute. Independent.co.uk reported on the incident:

“From the crowd that had gathered at the Kano Infectious Diseases Hospital, 200 sick children were picked. Half were given doses of the experimental Pfizer drug called Trovan and the others were treated with a proven antibiotic from a rival company.

Eleven of the children died and many more, it is alleged, later suffered serious side-effects ranging from organ failure to brain damage. But with meningitis, cholera and measles still raging and crowds still queueing at the fence of the camp, the Pfizer team packed up after two weeks and left.”

These kinds of story do not easily get wider public notice. It makes so much sense because big drug companies like Pfizer can do anything to keep its name clean in the eyes of the consumers and the general public through the use of its billion dollar profit to sanitize their skin especially in the television. They make it sure that no ears can hear and no eyes can see what is truly happening behind the façade of their public relations and family-friendly gimmicks which, of course, trick the consumer into buying their idea of “sickness and cure” more to keep their business going no matter what the cost is. Just recently, Matthews and Associates (see website link below), a group of lawyers who help ordinary, especially poor, people achieve justice and legal rights wrote on their website:

“Those who don’t know Pfizer’s checkered history may wish to learn something about the company’s recent criminal and civil crimes, especially as the company’s Covid vaccine promotion is set at warp speed. The UK government has already purchased 30 million doses of Pfizer’s Covid MRNA vaccine. The company has said it is on schedule to produce 100 million doses by the end of the year, and an additional 1.3 billion doses next year.”

On the same article, the group also posted Pfizer’s “track record for safety and ethics” where you can see that since the 90’s up to the present, the company is being sued for various illegal and criminal complaints; ranging from misbranding, fraudulence, irresponsibility that leads to death of hundreds of people, severe health hazards and side effects, tax evasion, swindle, as well as deaths which are seemingly intentional. Meanwhile, drugwatch.com also published (see links below) the same story in which readers can learn about the specific drugs that have led to Pfizer’s court battles. These cases, however, are not limited to the reported cases on these websites; there could be thousands more unheard and unknown related stories. Drug Watch also reported:

“Pfizer faces a growing number of lawsuits in 2018 involving some of its most popular drugs. In the past, courts dismissed thousands of lawsuits against Pfizer. The company also agreed to settle cases over illegal marketing and health care fraud.”

“At a time when much of the world has waited with baited breath for a vaccine that many hope will help restore civilized society to at least some semblance of normality, the history of Pfizer is rife with so much subterfuge and under-the-table dealing that the company will need all the help it can get to promote confidence in its hastily assembled Covid vaccine.”

To read the whole petition statement submitted by Dr. Mike Yeadon and Dr. Wolfgang Wodarg, go to this link: