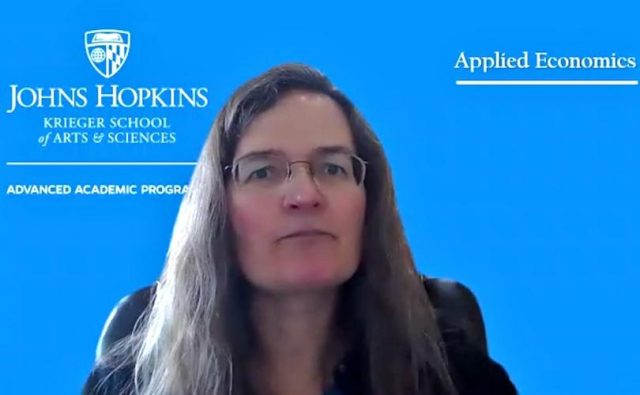 Using data from the Centers for Disease Control and Prevention (CDC) website, Dr. Genevieve Briand, the “Assistant Director for MS in Applied Economics”, published her findings regarding the purported Covid-19 death in which she concluded “there’s no evidence that Covid-19 created any excess deaths”. However, her report which was compiled by the Johns Hopkins University (JHU) newsletter, were removed by the JHU itself due to their concern that it “was being used to support false and dangerous inaccuracies about the impact of the pandemic. We regret that this article may have contributed to the spread of misinformation about COVID-19”.

So-called experts predicted earlier this year that there will be increase in the percentage of elderly group’s deaths as it was believed that Covid-19 will affect them the most because they are deemed, according to the World Health Organization (WHO), to be immuno-compromised. However, as the CDC data show, “deaths among all age groups remain relatively the same” and the expected rise has not been seen. Regarding the story, Life Site News reported:

“Presenting data from February to September, she noted that each week, before and after the impact of the virus, “an average of over 60,000 individuals die per week. So 50,000 to 70,000 deaths per week is normal, it is to be expected.” The latest weekly report from the CDC, notes that in week 46 of 2020, only “1,260” had COVID–19 “listed as an underlying or contributing cause of death.

Comparing deaths from 2014 to 2020, Briand then demonstrated that whilst the data recorded a slight spike in 2020, there were only 11,292 more deaths than 2018. Thus the COVID spike was found to be consistent with both seasonal and historical trends. Hence, according to Dr. Briand, “the COVID-19 death toll is misleading…deaths due to heart diseases, respiratory diseases, influenza and pneumonia may instead be re-categorized as being due to COVID-19.”

The concept of excess mortality rate in elderly is likely part of the grand fear-mongering tactic to further the agenda behind this fake pandemic: total social control and panic-driven people’s consent to vaccination and digital health certificate. As months go by and as we approach year one of this massive medical scandal, more and more people discovered suppressed facts and information ignored by the corporate media and realized that there are many things wrong to the narrative. However, it still looks as if the perpetrators don’t bother to consider the mounting evidences being used against them and still continue deceiving the public, testing people through fraudulent PCR tests, and pushing mandatory vaccination and other ridiculous policies.

It seems pretty worrying and disappointing to think that the people who speak out and work hard to stop this medical tyranny are not enough and perhaps, for now do not have enough power to bring the perpetrators down and turn things around for the truth to prevail and free us all. Since the beginning of this utterly crass circus starring politicians and government health agents as patsies, all sorts of deception have been done to keep the corruption going and to further the sinister agenda of the elite hiding behind the curtain. For example, on the aspect of virus isolation and genomic sequencing, Dr. Andrew Kaufman, one of the most known experts and whistle blowers of this coronavirus scam, explained in one of his scientific video presentations:

“If anyone wanna look into “next generation sequencing”, that’s the technique they’re using. And that’s a very powerful technique to sequence the genome of an organism which you already know they’re genome. In other words you can use it as a shortcut and then you can compare it to the reference genome. And then you know you have that organism so it’s great if you like trying to look for a mutation that maybe associated with the disease because you already know what the sequence is and then you’re finding where the sequence is changed.

But to use it to show a brand new organism that’s never been sequenced before, there’s no way to tell what you’ve got because you have no reference to compare it to so that’s why they use the computer modelling to essentially just create a genome out of, you know, from scratch and that’s why different labs that have done this genome have different lengths and different sequences. They say that it’s a mutating virus but really what it is they can’t reproduce the experiment because they’re just theoretically constructing a new, a novel genome.”

Of course, none of these agenda can succeed without the deceptive tricks of the usual suspects. As what Dr Ben Tapper has been saying, big pharma companies such as Moderna and Pfizer have been lobbying governments for mandated vaccines long before this fake pandemic started. And of course, to get what they want they must use millions of dollars to bribe everyone that’s on their way to push bills that help eradicate medical freedom of the individuals and therefore, taking the rights to bodily autonomy. In his speech addressing policy makers, Dr. Tapper stated:

“We had draconian bills sweeping out last year, coming after our medical freedoms and then the coronavirus came. The “Trojan Horse” to implement this tyrannical agenda. I believe this to be spiritual and psychological warfare in the people. The rate of suicide is the highest that it ever has been in human history. More people have died this year of suicide than corona. The National Alliance on Mental Illness (NAMI) helpline has seen a 65 increase in calls and emails since March. In other words, the vast majority of health: emotional, physical, psychological and financial hardships now faced by citizens are not due to Covid 19, they are due to ongoing catastrophic lockdowns, restrictions and policies imposed by unaccountable irrational governments.”