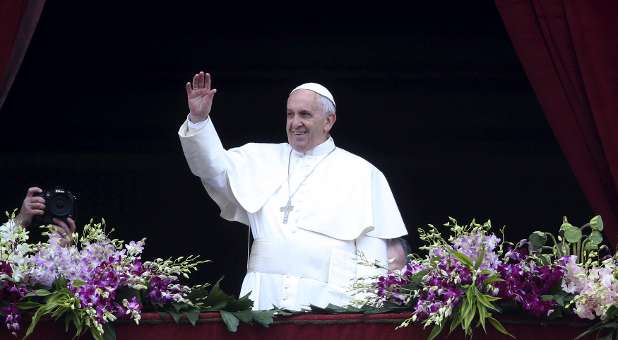 On November 19, 20, and 21, a three-day online gathering event called “The Economy of Francis”, formerly called “The Pope’s Davos”, was held and was attended by representatives of numerous countries such as Germany, UK, France, Mexico, Lebanon, Argentina, Portugal, Spain, Brazil, Uganda, and the US. This three-day event is an online meeting of more than a thousand young economists and scholars in which Pope Francis calls for economic resetting, though, without being conspicuous except to those who are aware and familiar of the so-called “new world order” agenda.

The live streaming event “addresses” the current crises which severely impact the economy, including the coronavirus scandal which is the main thing that is responsible for the on-going economic meltdown and now being met with resistance on a global scale up from institutional and legal down to the grassroots level. Ironically, on his speeches, the pope has never addressed the anomalies of this alleged pandemic, including the real impacts of the lockdown and other inhumane government protocols.

Back in August, Pope Francis has also expressed full support for the COVID vaccination agenda despite the fact that this “new vaccines”, called mRNA vaccine, will contain gene modifying agents; a process in which clearly contradicts the Christian dogma. In addition to that, most vaccines contain aborted fetal tissues or ‘cell lines’ called MRC-5. Lastly, vaccines also include other harmful chemicals and heavy metals known to be super toxic and dangerous to the human body. In his speech, the pope stated that the coronavirus vaccine “should be universal and prioritize the neediest rather than the wealthiest”. It means the pope suggested that the poor should be the first to get vaccinated. According to him:

“Humanity must plan the treatment of viruses by prioritising those who are most in need… It would be sad if, for the vaccine for Covid-19, priority were to be given to the richest… It would be sad if this vaccine were to become the property of this nation or another, rather than universal and for all.”

Recently, the pope has again openly calls for global governance or “universal brotherhood” to “effectively” fight the “great evil” that “afflicts” the world:

“The pandemic has put us before the great evil that afflicts our society, laid it bare, we can really feel it… Globalization overcame borders, but not minds and hearts. The virus spreads relentlessly, but we are not able to give a unified response.”

In his 43,000-word-long encyclical, entitled “Fratelli tutti” (“Brothers, all”), the pope’s support for the “global economic reset”, which is being promoted by the World Economic Forum (WEF) as the “great reset” or the “fourth industrial revolution”, and his backing for “one world government”, has become more obvious. According to the WEF website itself:

“Pope Francis criticizes the “dogma of neoliberal faith” in his encyclical, adding that “the fragility of world systems in the face of the pandemic has demonstrated that not everything can be resolved by market freedom.” He advocates for a political life not subject to the “dictates of finance,” and for making human dignity the focus of new, “alternative social structures.”

“The letter also calls for greater multilateral cooperation among countries, and urges a reform of the United Nations – so the “concept of the family of nations can acquire real teeth,” and the weakest among them can be guaranteed basic freedoms. The pope addressed the UN last month, urging member states to rebuild after COVID-19 in ways that involve less military spending and better treatment for refugees and women.”

On the said letter itself, the pope wrote:

“As I was writing this letter, the Covid-19 pandemic unexpectedly erupted, exposing our false securities. Aside from the different ways that various countries responded to the crisis, their inability to work together became quite evident. For all our hyper-connectivity, we witnessed a fragmentation that made it more difficult to resolve problems that affect us all. Anyone who thinks that the only lesson to be learned was the need to improve what we were already doing, or to refine existing systems and regulations, is denying reality.”

“Given this situation, it is essential to devise stronger and more efficiently organized international institutions, with functionaries who are appointed fairly by agreement among national governments, and empowered to impose sanctions…”

On the letter also, Pope Francis “blames” racism in which he stated that it’s “like a virus… goes into hiding, and lurks in waiting”. He also blamed neoliberalism, stating that the “neoliberal free-market orthodoxy” has resulted to inefficient healthcare system and poor livelihood which need “active government intervention”.