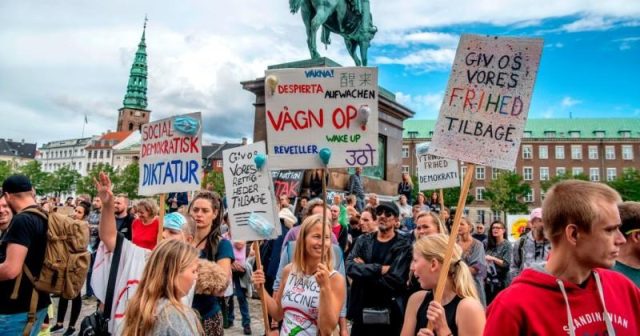 Although it was not reported in the mainstream news outlet, many sources from Denmark itself have confirmed that the country’s proposed “epidemic law” (epidemilov) has been “considered” to be nulled by the Danish government due to the massive pushback by the public through nine days of protest. The “epidemilov” draft received criticisms even from Danish medical professionals but most especially from the general public as it was considered a serious threat to their freedom because it would allow the National Board of Health to force the population to be vaccinated, among other forms of medical coercion, in order to contain and eradicate a “dangerous disease.”

Regarding the media block out, Lifesitenews.com, a website focusing on health, medical freedom, and family politics reported on November 18:

“This important news turned out to be hard to pin down and is still being presented as fake by Danish commentators on social media, with a number of users claiming to live in Denmark saying they had heard of no demonstrations or change of mind on the part of the government. Indeed, mainstream international media, including MSN, were silent about the event, which would have gone unnoticed if it were not for local social media users who posted videos of the “pots and pans protest” that put pressure on Danish authorities.”

It was also reported that under the epidemilov, “patients infected with a “dangerous disease” would face compulsory testing, hospitalization and treatment, and forced isolation”. Lifesitenews.com also continued:

“Individual opposition to these measures would be allowed to be overcome by use of the public force: in some situations, “coercion” and “physical restraint” by the police would become legal, as well as the lockdown of certain premises. Moreover, the Health Minister would be in the position to decide alone whether a disease is dangerous enough to activate the epidemic law, without any parliamentary control, according to The Local, a pro-European Union news site that gives English language information about nine West-European countries.”

The massive public protest was said to have started in November 4; attended by thousands of Danish citizens who demonstrated day and night in front of Castle Christiansborg in Copenhagen, the seat of the Danish Parliament or “Folketing.” In a radio news interview, Prime Minister Mette Fredericksen stated:

“I think we need to start over. In my eyes, all the parliamentary parties should be happy with the text and we need to get an epidemic law made with a democratic foundation, it must have a democratic content…. We will look at the epidemic law again, we take the criticism very seriously, and a better balance must be found.”

In addition, under the law drafted by Health Minister Magnus Heunicke, the government would have the power “to close or restrict companies’ activities without compensation”; allowing politicians to have complete control over businesses. It was also reported that the proposed epidemilov was heavily criticized as it would allow the government to “force businesses and organizations to hand over information about staff and members to authorities”, including the information about the individual’s movements, which the Danish Council of Ethics said that it would further undermine the public’s trust due to its promotion of a “culture of surveillance”.

“In the proposed law, the word coercion is included 92 times and power 84 times in different contexts, according to the Danish press. Some of its measures were already part of the March 2020 law passed 24 hours after Denmark was “closed” by lockdown. Opponents now hope that a full review of the new draft law will allow its worst provisions to be scrapped altogether.”