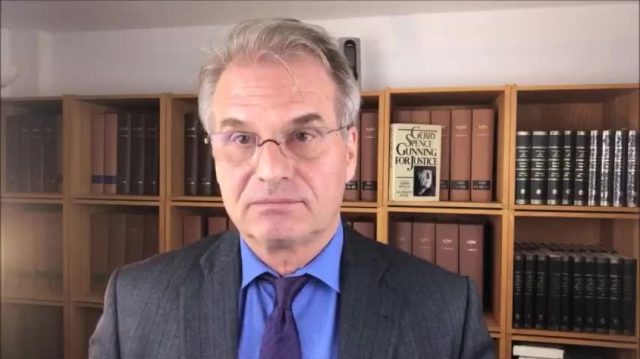 A lawyer who is admitted to the Bar in Germany and California named Reiner Fuellmich has recently just released a statement on an hour-long video explaining the lawsuits against the individuals and organizations responsible for this global health scandal happening right now; the coronavirus criminal scam perpetrated by some of the world’s richest philanthropic organizations and pharmaceutical companies through political and institutional lobbying, manipulation, and control. This hysteria driven fiasco, apparently, is now being put to its end.

Reiner Fuellmich is a member of the German Corona Investigative Committee formed in July 2020, a global investigation committee which now has thousands upon thousands of supporters. This very important committee caters unheard voices and suppressed scientific facts and solutions being presented by some of the world’s top scientists and doctors questioning the mainstream coronavirus narrative. This movement attempts to expose and end the covert crimes being committed in the name of science and medicine by the biggest drug companies and other elite-serving organizations that are in reality, channel billions of dollars back to the same institutions and industry such as the World Health Organization (WHO), the Centers for Disease Control and Prevention (CDC), the Bill and Melinda Gates Foundation (BMGF), etc.

In the statement, the German Corona Investigative Committee has concluded that this fake pandemic crisis is the greatest “crime against humanity ever committed” and that the “responsible criminals” must be prosecuted for civil damages, even death sentence, and face charges for countless death in different parts of the world. They also stated that the coronavirus fake pandemic crisis must be renamed the “Corona Scandal” which showed that:

Therefore, the German Corona Investigative Committee is now taking actions to file cases and prosecute the main culprits including big tech companies and the biggest internet platforms that serve as main channels of information such as Google, Youtube, and Facebook for participating in this “illegal” activity by implementing and enabling massive illegal censorship. Basing their decisions on a non-scientific model and prediction and non-“existent infections”, the committee claimed, the governments of the world’s lockdown policy, masks mandates, and other so-called measures imposed to the public are unnecessary and were only rooted in engineered fear, hysteria, and panic. Among the many important points the committee has presented also are:

Corona measures have no sufficient factual or legal basis, are unconstitutional and must be repealed immediately

Democracy is in danger of being replaced by fascist totalitarian models

Drosten (of PCR test), Tedros of WHO, and others have committed crimes against humanity as defined in the International Criminal Code

The committee has also pointed out the “politicians and the mainstream media” have conspired to drive the public to panic, shutdown businesses and sabotage the economy while children and adults alike are being subject to trauma and abuse. They, the committee continues to state, also tolerate illegal PCR testing and diagnostics to create massive public fear. They also concluded that the coronavirus measures have “destroyed countless companies and individuals worldwide”, enabled the anti-children / anti-human policies being perpetuated under the sanction of the state.

To watch the full video (or read the full transcript) of the German Corona Investigative Committee lawyer, go to these links:

Author’s note: Please share this article far and wide to inform the public about this very important good news. Thank you!