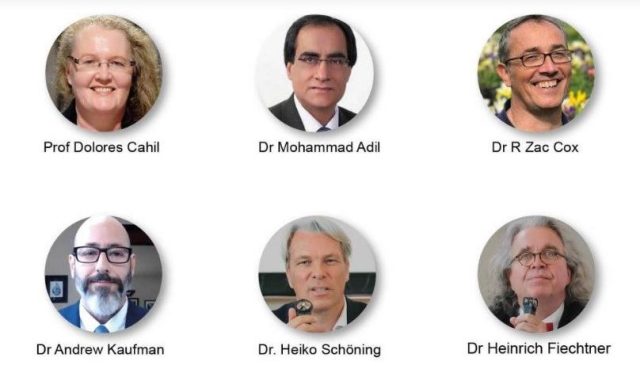 It should be known to many big institutions right now that there is currently ever growing alliances and organizations of health professionals and scientists from all over the world speaking out and standing up against this unbelievably pathological measures alleged to be the appropriate solution to COVID pandemic. But in reality, there is no pandemic; there is only global coronavirus scandal and an illegal scheme creating the epidemic of misuse of PCR testing being maintained by the entities that profit and benefit from it.

No matter how the mainstream corporate media covers the foul smell “hitting the fan”, the truth is getting out to the people everyday and hundreds of thousands have already said “enough is enough”, demanding the lockdown to end as well as other ludicrous policies being imposed, illegally and tyrannically, by the governments and politicians that have totally sold out to the globalist spectres and their big pharmaceutical allies who are behind this insanity and utter preposterous stupidity.

First, we have now this organization called World Doctors Alliance (WDA), “an independent non-profit alliance of doctors, nurses, healthcare professionals and staff around the world who have united in the wake of the Covid-19 response chapter to share experiences with a view to ending all lockdowns and related damaging measures and to re-establish universal health determinance of psychological and physical wellbeing for all humanity.”

WDA was formed by Dr. Mohammad Adil, MB BS . FRCSEd, Consultant General Surgeon and Chairman of the conference & World Doctors Alliance & GNO APMA. According to him:

“I formed the World Doctors Alliance (WDA) as a collaboration between medical professionals across the world to address some the most urgent and important issues surrounding the pandemic. I was rewarded with dozens of shields, souvenirs, certificates and tokens of appreciation from all the medical universities and colleges in 2019 only. I was awarded as” International speaker for scientific innovation and advancement“/

One of the aspects being presented by WDA is the importance of death certificates being illegally manipulated and falsified. According to their statement on their “Open Letter to the UK Government, Governments of the World and the Citizens of the World”:

“The rules for the signing of death certificates have been changed solely for covid by the Coronavirus 2020 Act. Doctors do not even need to have physically seen the patient in order to sign death certificates. The Act has removed the need for a confirmatory medical certificate for cremations. Autopsies have virtually been banned, no doubt leading to misdiagnosis of the true cause of deaths; and also reducing our understanding of the disease itself.

Worse still, care home staff who largely have no medical training are able to give a statement as to the cause of death. Covid was put on death certificates merely on the ‘suspicion’ of people having covid. This may well be unlawful, since it is a crime to falsify death certificates. People who die within 28 days of a positive pcr test are deemed to have died from covid, even if they die in a car crash or from a heart attack; clearly over inflating the death toll.”

Meanwhile, another effort being ignored by the mainstream media network right now is the lawsuit of “Crimes Against Humanity” being filed by the German Corona Investigative Committee, also an alliance of health professionals, lawyers, and scientific experts, against some members of the German government and other officials involved in this ridiculous scam. According to them:

“This corona crisis, according to all we know today, must be renamed a “Corona Scandal” and those responsible for it must be criminally prosecuted and sued for civil damages. On a political level, everything must be done to make sure that no one will ever again be in a position of such power as to be able to defraud humanity or to attempt to manipulate us with their corrupt agendas. And for this reason I will now explain to you how and where an international network of lawyers will argue this biggest tort case ever, the corona fraud scandal, which has meanwhile unfolded into probably the greatest crime against humanity ever committed.”

To help understand what’s really going on right now, the German Corona Investigative Committee also remind the public about the “swine flu scam” of 2009 which also clearly shows the population harm agenda behind and the desperate attempt of the big pharmaceutical cartels, with the financial support of the eugenicist elites using bogus philanthropic foundations, to sell their poisonous vaccines to the global public. The group continued to state:

“These vaccines proved to be completely unnecessary because the swine flu eventually turned out to be a mild flu, and never became the horrific plague that the pharmaceutical industry and its affiliated universities kept announcing it would turn into, with millions of deaths certain to happen if people didn’t get vaccinated. These vaccines also led to serious health problems. About 700 children in Europe fell incurably ill with narcolepsy and are now forever severely disabled.

The vaccines bought with millions of taxpayers’ money had to be destroyed with even more taxpayers’ money. Already then, during the swine flu, the German virologist Drosten was one of those who stirred up panic in the population, repeating over and over again that the swine flu would claim many hundreds of thousands, even millions of deaths all over the world. In the end, it was mainly thanks to Dr. Wolfgang Wodarg and his efforts as a member of the German Bundestag, and also a member of the Council of Europe, that this hoax was brought to an end before it would lead to even more serious consequences.”