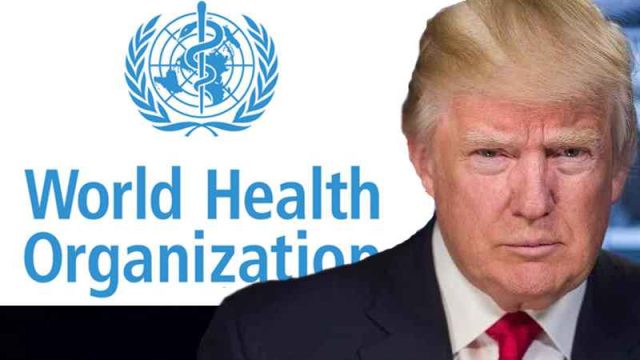 According to President Donald Trump last Friday, the US will be terminating its relationship with the World Health Organization (WHO) for a reason that WHO failed to enact reforms regarding its management on the coronavirus crisis. It is said that the US had been the biggest contributor to WHO, providing approximately $450 million a year.

“Because they have failed to make the requested and greatly needed reforms, we will be today terminating our relationship with the World Health Organization and redirecting those funds to other worldwide and deserving urgent global public health needs.” This is according to Donald Trump at the Rose Garden press conference at the White House.

Last month, Donald Trump announced that the US would not continue providing funds to WHO if the organization did not “enact major substantive reforms” in dealing with the current crisis. And now, it seems that Trump was serious about this threat. However, this make some people question: is Donald Trump aware of the WHO’s decades of corruption and involvement on major crimes committed by another WHO’s major funder Bill Gates, through his foundations and other organizations involved in global vaccination campaign, or is he just playing dumb about it?

For example, just December of last year, a medical doctor from the organization named Dr. Soumya Swaminathan was caught lying about vaccine safety. Assuring viewers that the organization are doing a great job in monitoring potential negative effects of vaccines, the doctor appeared in a public advertisement not only claiming that vaccines are totally safe but also mocking those who speak out against it. But when asked after a few days later during the WHO’s Global Vaccine Summit, Dr. Swaminathan admitted that vaccines have risks and answered, “We really don’t have very good safety monitoring systems”.

At the same event, another WHO doctor named Dr. Heidi Larson stated:

“We have a very wobbly ‘health professional frontline’ that is starting to question vaccines and the safety of vaccines. When the frontline professionals are starting to question or they don’t feel like they have enough confidence about the safety to stand up to the person asking the questions. I mean most medical school curriculums, even nursing curriculums, I mean in medical school you are lucky if you have half a day on vaccines.”

Meanwhile, just early this month in an article contributed by Richard Gale and Dr. Gary Null to globalresearch.ca, the matters regarding WHO’s inconsistencies on its “vaccine adverse effects monitoring system” was discussed:

The WHO’s Global Advisory Committee on Vaccine Safety is the group responsible for administering vaccine programs in poorer, developing countries. It is also responsible for gathering data on incidents of vaccine injuries. Any deaths following vaccination campaigns are ignored and ruled as coincidental. This policy is based on the erroneous assumption that if no one died during a vaccine’s clinical trials, then the vaccine should be regarded as automatically safe and unrelated to any deaths that might occur. Consequently, the WHO’s monitoring system is seriously flawed and requires a major overhaul.

The article also proceeded to discuss about the WHO and GAVI or the Global Alliance on Vaccination and Immunization:

One of the more controversial incidences is the WHO’s collaboration with the Bill Gates funded GAVI Vaccine Alliance campaign to launch the pentavalent vaccine (diphtheria, pertussis, tetanus, HIP and Hepatitis B)  in Africa and later in South and Southeast Asia. In India, health officials recorded upwards to 8,190 additional infant deaths annually following pentavalent vaccination.  The WHO response was to reclassify its adverse event reporting system to disregard “infant” deaths altogether. Dr. Jacob Puliyel, a member of the Indian government’s National Technical Advisory Group on Immunization concluded: “Deaths and other serious adverse events following vaccination in the third world, that use WHO-AEFI classification are not recorded in any database for pharmacovigilance. It is as if the deaths of children in low (and middle) income countries are of no consequence.”

During the year 1989, the WHO organized and sponsored a symposium that promoted a vaccine that was later to be found to have been laced with sterilizing hormones called HCG and estradiol. HCG was found out to prevent pregnancy on women and could also enable miscarriages while estradiol makes men infertile. This only proved that the WHO willingly helped a hazardous vaccination campaign to the so-called third world countries that have the purpose of “population control or reduction”.

In 2004, “the WHO, UNICEF and CDC launched a vaccination campaign to immunize 74 million African children” for the alleged polio outbreak. During the campaign, laboratory test in Nigeria found that the vaccine these organizations pushed contains “estrogen and other female hormones”. Meanwhile, during the 1990’s, HCG was again found in the tetanus vaccines being given to women in the Philippines and Nicaragua during their child-bearing years which resulted to massive spontaneous abortions. This was reported by Catholic health workers.

In 2014, the WHO was again involved in a similar scandal in Kenya. This is when the Kenya Catholic Doctors Association, led by Dr. Wahome Ngare, also discovered HCG hormone in the tetanus vaccine that was administered to Kenyan women. Later in 2015, the Kenyan Conference of Catholic Bishops reported that estradiol was also found in a polio vaccine made from India but distributed by the WHO. According to the same report by Gale and Dr. Null, “all of the polio vaccine samples tested contained HCG, estrogen-related compounds, follicle stimulating and luteinizing hormones, which will damage sperm formation in the testes. Even more disturbing, this vaccine was going to be administered to children under five years of age”.

So again, the big question is that why WHO’s mismanagement on coronavirus crisis is the only issue being brought up not only by the Trump administration but by other top country officials as well? Haven’t they heard about these nefarious incidences and crimes against humanity that involved WHO or most of them are just ignoring it and playing dumb?