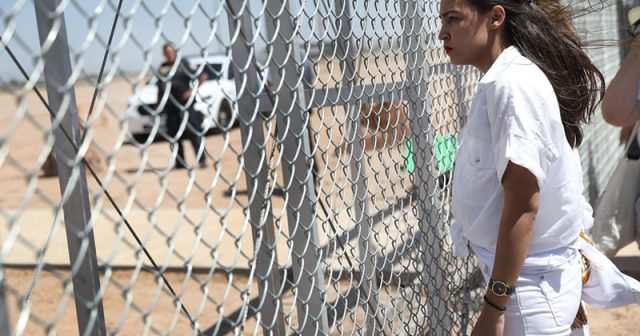 In June of last year, Paul Joseph Watson wrote an article about Alexandria Ocasio-Cortez revealing the real story behind AOC’s photos allegedly crying over immigrants at the parking lot in a, according to the claim, border protest. According to Watson, this is just a hoax and a staged photo-op because in reality, AOC “was crying over an empty parking lot”

“Newly uncovered photos from the border protest attended by a tearful Alexandria Ocasio-Cortez show that she was crying over an empty parking lot. Many have accused the Congresswoman and her supporters of staging a photo-op after the images, taken during a 2018 event outside a migrant “tent city” in Tornillo, Texas, went viral earlier this week. The photos show an emotional AOC. Her attention appears to be directed towards whatever is on the other side of the fence. However, a photo from a different angle shows there is nothing there aside from an empty parking lot and some police officers.”

On the article, Watson used a Twitter post by a user named Bobby Dread which appears to be the one posting the photo. This is what the user said about the photo:

“So what is Sandy Cortez reacting and crying about? She says it’s in reaction to seeing the kids in cages. No, she’s looking at a fence, with a road, along with armed CBP agents guarding the building in the backround. This is the same location De Blasio was at. So, it is purely staged. Notice all her photos are at an angle among the fence & not through the fence. How poignant would it have been to show migrant children trapped in the other side of the fence from Sandy Cortez? So why didn’t they? There was nothing but a building & road!”

You can read the full report/view the photos here:

Meanwhile, just a few days ago, another controversial news about AOC is now again surfacing in the social media. The article, written by the Daily Washington News (DWN), is publishing the Democrat spokesperson’s statement regarding how children should be raised. The article was titled “AOC:’Children Should Be Raised by the State”. It says that AOC “continues to push her socialist agenda and now it’s getting downright scary”. It went on to say:

“…her latest genius plan is to socialize our children. That’s right, apparently, AOC feels that upon birth, the offspring of American families should be taken from their homes to be raised by the state “so that they can do properly indoctrinated and become model citizens for a new and better American future”. This is straight out of the Soviet playbook where children were routinely removed from households and molded into various roles for government. They were treated as possessions, not people, while families mourned.”

According to DWN, this statement from AOC was her answer posted at Tumblr “when asked her thoughts on the plight of orphaned children throughout the country, currently at 50 years high”. The rest of AOC’s statements, according to DWN, are these:

“Our children are underused in this country. Or rather, improperly used. They say children are the future. That is absolutely right. They hold the promise to shape the future of our nation. This can be positive or negative. Orphans are in the right place. The government can begin their training early. All kids should go to the government. By staying with family, children are fed varieties of information. There’s no consistency from one household to the next. This is counterproductive to the societal good. In order to further the interests of the country and all its citizens, there needs to be common learning amongst all of the young. Child-rearing taken over by the state can accomplish this while also providing a safe and healthy environment in which to grow. Surrendering your children to the state is really the highest form of patriotism there can be. It shows you love our country and are committed to building its success for generations to come.”