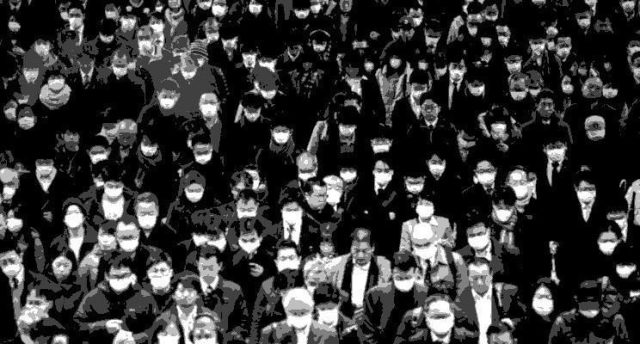 The deadly illusion caused by the official narrative created by the most psychotic, totalitarian, fear-mongering cult leaders behind this coronavirus scam is creating a global catastrophe; widely ignored by its followers who blindly obey the insane protocols being inflicted upon them. Ironically, this delusion imposed by the covid cult leaders is seen as virtue by many of these order-followers who, unfortunately, cannot critically asses what is happening around them and inside their head. As what have been observed and studied by many psychologists specializing in the subject of cults, this culture of blind obedience and neurotic virtue-signalling are vital components of every cult in history; waging a brutal war on critical thinking and common sense that contradicts their dogma and indoctrination.

One of the reasons for this current tragedy is that since the beginning of 2020, covid cult followers have been successively attacked with psychological terror and fear mainly in the manner of mainstream fake news and bogus so-called epidemiological computer models funded by, of course, none other than the same eugenicist elites through their fake philanthropic organizations, such as the Bill and Melinda Gates Foundation (BMGF), which are in charge and the biggest funder of the institutions responsible on all of these psychopathic measures, mandates and ridiculous fake science. We are talking about the World Health Organization (WHO) and the biggest vaccine company disguised as public health agency…the Centers for Disease Control and Prevention (CDC). These are the usual (and the biggest) players of medical scam in the modern history of mankind and the executioner for genocide and depopulation.

As described in the essay of CJ Hopkins entitled “The Covidian Cult”, these are the pictures:

“Their initiation into the Covidian Cult began in January, when the medical authorities and corporate media turned on The Fear with projections of hundreds of millions of deaths and fake photos of people dropping dead in the streets. The psychological conditioning has continued for months. The global masses have been subjected to a constant stream of propaganda, manufactured hysteria, wild speculation, conflicting directives, exaggerations, lies, and tawdry theatrical effects. Lockdowns. Emergency field hospitals and morgues. The singing-dancing NHS staff. Death trucks. Overflowing ICUs. Dead Covid babies. Manipulated statistics. Goon squads. Masks. And all the rest of it.”

Just like any other cult in history, the covid cult members fanatically believe the solutions from their leaders; saving them from the impending doom thought to be caused by an invisible enemy, a virus, which in actuality, has never been isolated and proven to exist; let along to cause and infection. Add to the utter stupidity is that the tool being widely used to identify this imaginary virus, the RT-PCR invented by Dr. Kary Mullis, is not really intended for diagnosing a viral-disease. Not even any disease! And what’s more unbelievable is that these covid cult followers blame the non-believers on their own failures and faults (the rising of so-called positive cases) for not following and conforming to their delusions – the lockdown, the masks and other stupid rules. How ridiculously stupid!

But as what psychologists like Leon Festinger have observed in most cults, there are reasons for this. Festinger studied a cult called ‘The Seekers’ and wrote a book on their findings called “When Prophecy Fails”. In an essay about Festinger’s work by Karen Harradine, it was explained:

“People react to discrediting evidence not by acknowledging reality but by entrenching their beliefs even further. This counter-productive thinking is further exacerbated by ‘cognitive dissonance’, another Festinger theory.  When confronted with evidence disproving their beliefs, people will opt for the least painful choice, holding on to their beliefs, no matter how catastrophic these are, rather than admitting they have been wrong. Our political class – the Government – is currently providing a textbook example of this behaviour.”

It is really urgent and important to detach ourselves from this collective psychosis happening right now. It is really time to save our lives and others from the on-going destruction caused by blind obedience to these covid cult leaders before it’s too late. The science of all of these dramas is already slapping us in the face yet the psychopathic and greedy covid cult leaders and their seemingly brainless followers still want to force us to ignore it. It is not hard to understand that all of these baseless protocols and measures are causing serious and long-lasting consequences that are difficult to recover from instead of bringing what has been promised. As what Karen Harradine wrote:

“Humans are sociable animals. We are not meant to be locked away in solitary confinement and denied the sight of each other’s faces. To be forcibly separated from our loved ones damages our mental health. Masks dehumanise us and feed fear. Yet lockdowns, social isolation and masks are the weapons of choice for politicians in their lunatic ‘war’ on a virus, despite being detrimental to our health, economy and society.”