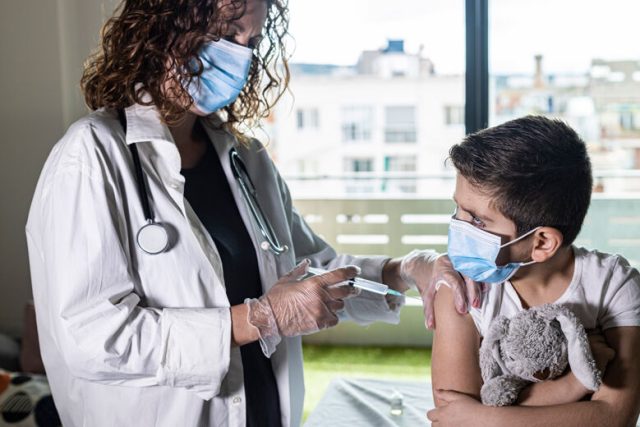 A bill which was first introduced in March last year called the “Minor Consent for Vaccinations Amendment Act”, allowing children to decide and to get vaccinated against their parent’s will, passed with a 12-1 vote last week in DC. The only Councilmember who objected the bill was Trayon White, saying that “parents have a fundamental right to direct the upbringing, education and care of their children”.

According to Health Nut News (HNN):

“The bill was introduced by Ward 3 Councilmember Mary Cheh and includes several measures to help ensure confidentiality. It directs health care providers to seek reimbursement directly from insurers, and it requires doctors to submit an immunization record directly to the young patient’s school instead of a parent.”

The proposed bill approved by the D.C. Council gives eleven years old and older the option to have the vaccine without their parent’s consent. HNN continued to report:

“Under the legislation, if a doctor determines that a minor is capable of informed consent, they would be able to seek government-recommended vaccinations their parents object to on religious grounds. They could also get vaccinated against the human papillomavirus (HPV).”

“The bill was introduced by Ward 3 Councilmember Mary Cheh and includes several measures to help ensure confidentiality. It directs health care providers to seek reimbursement directly from insurers, and it requires doctors to submit an immunization record directly to the young patient’s school instead of a parent.”

Meanwhile, in HNN’s Facebook page, many parents expressed their objection and criticized the D.C. Council’s approval; citing the many incidences related to vaccine death and injury, including the very controversial HPV vaccine aimed at adolescent female and male children. One parent commented:

“Let’s face it, make the kids sick and pharma has patients for life. Experimenting on children sounds horrific but what do people think giving 72 needles full of toxins (with no guarantee of safety and every abdication of liability) has been? Just an experiment with those that get damaged being left to fend for themselves. This needle will be no different. The Gardasil or HPV needle was only tested for 5 days, look up the research yourself and then look up all the damage it has caused to innocent kids.”

“Criminal complaints have been filed in France against yet to be named defendants regarding severe injuries after Gardasil vaccinations. The complaints were filed by Camille Krouchner on behalf of ten young women, ages 18 to 24, suffering from a variety of autoimmune disorders including lupus, Guillain-Barré, ADEM, idiopathic hypersomnia and multiple sclerosis after being injected with the HPV vaccine, Gardasil.”

And in 2014, https://preventdisease.com also reported:

“Just six months ago, hundreds of adverse reactions to cervical cancer vaccine reported in Japan, where teenagers were injured and disabled by Cervarix and Gardasil HPV vaccination campaigns. They are now voicing their disdain and stepping up efforts to permanently end the government’s subsidy program for the toxic injections. Just last month, the health ministry issued a nationwide notice that cervical cancer vaccinations should no longer be recommended. Japanese teens who received the vaccines are now in wheelchairs with damage to their brains and spinal cord. The side effects of the HPV vaccine include convlusions, grand mal seizures, blood problems, circulatory collapse, lymphadenopathy, chronic fatigue syndrome, foaming at mouth, transient blindness/deafness, paralysis and immune mediated disease.”

Meanwhile, another parents also commented on the HNN Facebook page regarding this consent issue:

“How can children give consent? Isn’t that a contract for care between them and the adult administering the vaccine? Since when can children enter into legal or medical agreements? Wouldn’t the government or school or hospital have to be the guardian of the child? How is this even possible? And informed consent? – most adults don’t even understand how a vaccine works and what’s in them. It’s a three headed monster – a move to push vaccines, cancel religion, and also lower the age of “consent” so other things done to children seem more “normal”. It’s a sick and twisted game of greed, control, and attack on children and families.”

“Of course they will scare the hell out of them telling them if they don’t take the vaccine they’ll die! They can do that in schools by having the nurse school/ doctor go to class and give them a little lecture on the be subject. Knowing that now many parents are aware that no vaccine has been proven safe, they now had to find another way to make sure these kids get them all. It’s really unbelievable!!!”

“Kids don’t have mature enough brains to make these decisions and if a doctor offered an iPad or something else to get kids to get shots the kids would probably do it. Who gets to care for the vaccine-injured child that made his own decision to get the jab? Stop this!”