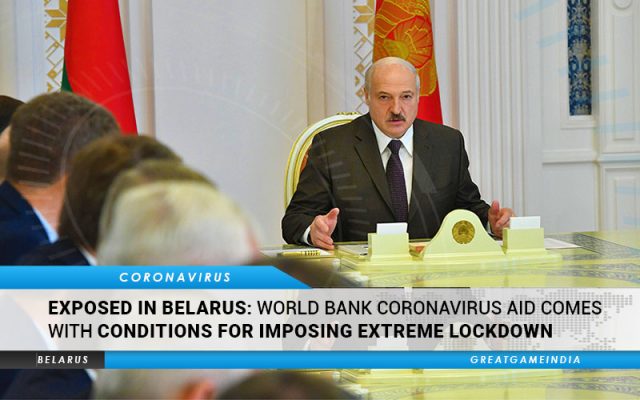 As one of the very few European countries that have not implemented rigid and usually baseless coronavirus response, Belarus epitomizes a government with logical approaches which have allowed essential services to remain available for the public amidst the alleged outbreak on the country. Not only that, as a respect for human rights and freedom, the government also let other cultural celebrations continue, including sports. Except from the extension of school holidays, there is not really much changes happened in the Belarus.

One main reason for this is that Belarus’ president Aleksander Lukashenko refused the World Bank’s offer of loan which in return, can be used to ask for “favors’ which would surely be considered sinister. Not so much making noise, the World Bank, the International Monetary Fund (IMF) and their other cohorts have cleverly attached within the real agenda behind the official version of this diagetic “truth” that is continuing to instill fear to the public by perpetuating the thinking that “deadly viruses” are real and that it could spread from person to person. Moreover, according to them, this current virus we have have originated from an animal; specifically from a bat.

As reported by GreatGameIndia, here’s how they hide their real agenda through their so-called coronavirus aid:

“Huge foreign loans are given to sovereign nations by the World Bank, IMF and the likes. But the conditions that come attached to these loans are seldom told by governments to their citizens. A recent case in Belarus has exposed the conditions laid by these agencies for loans being provided for COVID-19. The President of Belarus has exposed that the World Bank coronavirus aid comes with conditions for imposing extreme lockdown measures, to model their coronavirus response on that of Italy and even changes in the economic policies which he refused as being “unacceptable”.

On this issue, Belarusian president can be considered a good example for many countries which have been fooled by these globalist mafia financial monopolists who invested on this agenda; expecting huge results in return, luring and bribing corrupt politicians, legislators, and health officials who are greedy enough to take the bait in exchange for draconian laws and policies. Sadly, it seems these politicians they’ve bought aren’t human enough to have the conscience to realize the consequence of their actions to the rest of the population.

Fortunately, on the other side also is that there are now officials and experts in health, science, and medicines in European countries that are starting to take matters on their own hands and starting to investigate. One example is the movement that started in Germany, the COVID 19 Extra Parliamentary Investigation Committee or simply known as the ACU (see their website below), which is now spreading across many European states through the internet. According to one of its members Dr. Hadditsch:

“…as a doctor, I could no longer tolerate this contemptuous approach to health and human beings, as it is in stark contrast to the professional understanding and ethics for all of us. This permanent fear- or rather one could say panic mongering, the psychological and social damage that can be deduced from it, the gigantic medical and economic colloquial damage and last but not least the massive interventions in all our cultural and club life are, I believe, at least as a holistically oriented physician, reason enough and motivation enough to stand up and fight against this insanity.”

Meanwhile, another ACU main coordinator named Dr. Heiko Schöning also described what might be one of the revisions to the hospital’s health protocols connected to the changes dictated by the World Bank via the WHO. According to the doctor:

“Another reason why it is so urgent that we have to take it into our own hands now, especially when no one else is doing it who might be more called upon, is a circumstance that I would like to mention again. All over the world there are always people whose heart stops to beat. Everyone has a 100% risk that at some point their heart will stop. The good news is: you can now also revive, reanimate and there is a guideline how to do it. And this guideline was changed internationally at the beginning of April, and in the course of time it was also changed in Germany. And this guideline, you have to imagine, says now, “because of the high risk of infection with CoVid-19 and the high damage that could be caused by it”, you should no longer give breath – imagine that – “you should now put a cloth over your mouth”.

This means that many many more people in the world will die now, because it is scientifically proven that if you press and breathe, many more people survive. And so excess mortality is produced for statistics. We have to overturn this resuscitation guideline. We can actually see, and we will be able to provide comprehensive proof together in this committee of inquiry, that we do not have the plague or the killer virus. That is good news!  But we really must ask ourselves: Why is it the way it is? Why are these measures in place? Who benefits? We don’t want to wait until we ourselves and also our friends, our relatives suffer personal and also physical damage.”

According to multiple sources, the Belarusian president is considered “the last tyrant in Europe”. However, it seems he cares enough for his people to turn the World Bank’s insidious offer down. According to President Aleksander Lukashenko:

“We hear the demands, for example, to model our coronavirus response on that of Italy. I do not want to see the Italian situation to repeat in Belarus. We have our own country and our own situation. It is ready to fund us ten times more than it offered initially as a token of commendation for our efficient fight against this virus. The World Bank has even asked the Healthcare Ministry to share the experience. Meanwhile, the IMF continues to demand from us quarantine measures, isolation, a curfew. This is nonsense. We will not dance to anyone’s tune”.

Asian countries such as Malaysia, Philippines, and Brunei receive loan from World Bank. This is the reason why the coronavirus response from some of these countries was quite brutal and barbaric. The Philippines, for example, signed a $100M debt for its so-called “COVID-19 Emergency Response” in April. Later in June, the World Bank again approved a $500M deal for the same reason. According to Achim Fock, the World Bank Acting Country Director for Brunei, Malaysia, Philippines and Thailand:

“Boosting the country’s capacity to respond to COVID-19 will save lives. The government has taken quick and decisive action in the fight against the COVID-19 pandemic and the World Bank is proud to support its efforts. Right now, no other investment offers greater return.”

In the beginning of March, WB boasted on its website: “World Bank Group Announces Up to $12 Billion Immediate Support for COVID-19 Country Response”. A few days later, it announced it increased the coronavirus budget to $14B In order to “help sustain the economies and protect jobs”. It then proceeded to announced that their coronavirus loan offer has reached 100 developing countries. However, in reality, these groups are the ones engineering this global sabotage of the economy, influencing governments and other “real” beneficiaries to impose preposterous inconsistent measures and mandates, sometimes with catastrophic results, that are scaring the population and therefore preventing them from coping up or survive against the elites own manufactured crisis.