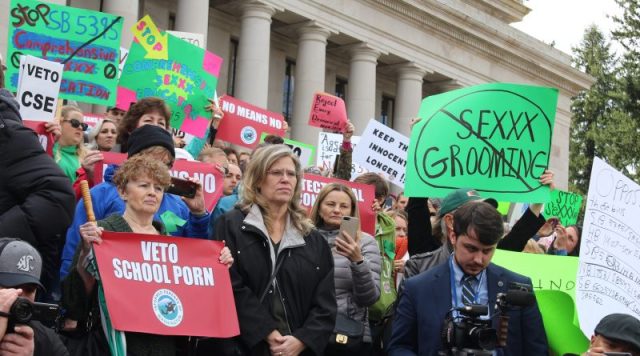 In February and March of this year, parents coming from different parts of the US who are against the World Health Organization (WHO) and the Planned Parenthood’s comprehensive sexuality education (CSE) program gathered at the Washington State House to protest. The coalition was called Informed Parents of Washington (IPOW), formed to fight CSE in schools and legislation which, according to them, “infringes on their parental rights.”

Translated into different languages and currently being used in at least 14 countries, this program was said to have been established by WHO Collaborating Centre for Sexual and Reproductive Health in 2003 at the German Federal Centre for Health Education (BZgA) to “establish standards for sexuality education, provide guidance for implementation, and to support the implementation of training programs for educators”.

According to this program by the WHO, children age four to six should be educated about homosexuality so that they will be guided to develop ‘an open, non-judgmental attitude.” The program includes recommendations for children of different ages, claiming that “sexual health can be attained only if all people, including young people, have access to universal sexuality education and sexual health information and services throughout their lives.”

As stated in the document, the WHO claims:

The WHO also added in the document:

“The fear that sexuality education might lead to more or earlier sexual activity by young people is not justified, as research results show.”

“As argued, parents, other family members, and other informal sources are important for learning about human relationships and sexuality, especially for younger age groups. However, in modern society this is often insufficient, because these informal sources themselves often lack the necessary knowledge, particularly when complex and technical information is needed (such as that pertaining to contraception or transmission modes of STI).”

Another part of the CSE program, which Planned Parenthood has also contributed materials, and which IPOW also complain about, is the curriculum for grades 4-6 called FLASH (Family Life and Sexual Health). In the said curriculum, here is an example paragraph:

Intercourse is the kind of sexual touch when the penis is in the vagina. It is sometimes called “vaginal intercourse” or “lovemaking”…but “lovemaking” can mean different things to different people. Ejaculation is what you call it when semen, the fluid carrying sperm, comes out of the penis.  If he ejaculates during intercourse — or even if he ejaculates onto her labia, without ever putting the penis inside — sperm can swim up into her uterus[.] (p. 12–13)

Meanwhile, according to IPOW:

“Currently, Washington State Legislators have introduced 4 bills to mandate CSE to every school in Washington, grades K-12. While … districts will not be mandated to use one particular curriculum … we provide examples from each of the most popular choices. Make no mistake, they are all bad.

We maintain that because CSE is not appropriate for any child, it should not be given as an option to opt-in or opt-out[.] … We reject the Legislature’s false attempt at appeasement by offering to allow kids to “opt-out” because we know that is never truly an option. It is impossible to guarantee that subjects will not be brought up in other classes and one can never opt out from the talk amongst students.”

On the other hand, another concern some parents also have is the organization’s “connection” with the trafficking and sexual exploitation of children. The former chief of operations at the UN’s Emergency Co-ordination Center, Andrew MacLeod, claimed in 2018 that “an estimated 60,000 cases of sexual exploitation had been committed over the last decade by 3,300 pedophiles working in the organization”. In an interview with British tabloid The Sun, Macleod said, “Child rape crimes are being inadvertently funded, in part, by United Kingdom tax-payers”.

“UN Secretary-General António Guterres admitted that the UN had “wrestled for many years with the issue of sexual exploitation and abuse,” as reported by the British newspaper The Times. In early 2017 the United Nations Secretary-General admitted to 145 incidents involving 311 victims in 2016 alone, mainly in peace operations.”

“In one case that is disturbingly relevant to the WHO education program, Canadian humanitarian worker Peter Dalglish, who helped found the charity Street Kids International, was taken in by police in Nepal over claims he was involved in pedophile activities in Kavre district, around 50 kilometers north of the capital, Kathmandu. Under the guise of community worker, claiming to educate poor kids and provide necessary support, he had been sexually exploiting these children.”