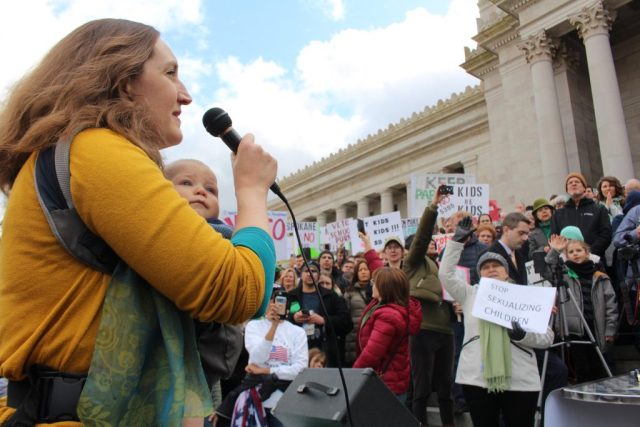 In September of 2019, a former sex educator for 10 years wrote an article that describes how Planned Parenthood (PP) implements its program regarding sex education, called “Title X”, which is designed to educate young women about Planned Parenthood’s method of family planning. According to the author:

“On one hand, Title X is a program that serves women and families by helping them access family planning medical services. On the other hand, it’s also the perfect vehicle for Planned Parenthood to promote social change by utilizing its well-meaning prevention education to proselytize youth toward sexual promiscuity and abortion. It’s the perfect business plan for a lifelong customer, and it’s being backed by trusted government programs for Title X and HIV prevention.”

Monica Cline, a speaker and parent educator “trained by and collaborated with Planned Parenthood for 10 years”, describes how people’s attitude towards sex, especially young people during the late 90’s when he was still an HIV educator while at the same time a member of a local organization, involves violence towards girls and rampant unwanted pregnancies. Telling about how a PP director convinced her to run the program and “teach” girls, the author wrote:

“She told me several horror stories about young girls coming into the clinic with injuries, objects, and pregnancy. Some were as young as 10 years old. I sat there disturbed by what I heard, and I wanted to do my part to help these girls. I said, “You’ve convinced me. Teach me how to teach girls not to have sex.”

However, it was revealed to her the different approach Planned Parenthood is making in dealing with the problem of sex with these people. The director told her that instead of telling not to do the activity at that very young age, Planned Parenthood teaches these children to “do it safer”. Despite her expressing and explaining her perspectives about how unsafe and unhealthy sex is to their young minds and body, the director told her it is appropriate since these children do it anyway and that thinking the opposite is “judging them for their choice”.

She was told to “view her audience as if they have done it all and then teach them how to do it safer”. As she describes the specific scenario in the room, this is how it looks:

“Since most adolescents are nervous to speak about sex, we begin the lesson with an icebreaker, which is geared to reduce the children’s natural inhibitions to prepare them for the sex education lessons. The educator asks the kids to shout out or go to the board and write all the slang terms for reproductive body parts or sexual activities. You can imagine how crass this becomes.”

She then continued what she thought of it:

“At first, they nervously say a few worlds, but when they notice the educator is encouraging them, they fully participate. The quiet ones in the group get used to it too. By the end of this activity, there is a collage of illicit sexual terms and activities written all over the board. The kids begin to believe that this is part of healthy sex education. The terms are dehumanizing, and the activity serves to restructure their thoughts about their bodies, others’ bodies, and the act of sex. Sexual intimacy is redefined from being special, for marriage or for having babies, to being crass, seeking pleasure over meaningful relationships, accepting STDs as a way of life, and terminating the lives of babies so we can worship our sexual rights without hindrance.”

In every generation, of course there is always a need for real sex education so that people can consciously contribute to the balance of nature. But according to Monica Cline, the approach used by Planned Parenthood and other like-minded organizations “takes sex education to the next level”. She wrote that Planned Parenthood has “added spice to education which transforms our youth from naturally curious to sexually explicit”. Title X was therefore formed “to assist primary care providers” in offering “family planning services”. It also continues to say that the method will “help couples or parents achieve their desired number and spacing of children”, and this will in turn increase the chance that children “will be born healthier.”

“Title X recognizes that many people are sexually active outside of marriage and with multiple partners, so the need to educate about the transmission of sexually transmitted diseases and HIV is important. It’s also particularly important among adolescents and young adults, who together make up only 27% of the U.S. population but account for 50% of the new sexually transmitted infections in our country each year.”

Meanwhile, as a response to related issue, parents from different parts of the US gathered last March 11 “to protest” and demand the veto of the Senate Bill 5395, a very controversial bill which urges Gov. Jay Inslee and was approved by Democratic party in the senate and house. The bill is in support of the comprehensive sexuality education (CSE) curriculum, subjecting kids as early as kindergarten into unnecessary information regarding sex, which seemingly pornographic to many parents.

Some parents firmly believe that the legislation is an “overreach of the state government”. Meanwhile, the bill allows districts to adopt their own sexual education curriculum, even though that this “can be very costly for a school district”. According to an official report:

“Rep. Tom Dent, R-Moses Lake, said he had issues with the “pornographic” nature of the curriculum, which he said students will be subjected to as early as kindergarten.”

“Why do we want to take their innocence?” Dent asked the crowd, implying that exposing children to sexual material at such a young age would not be appropriate.”