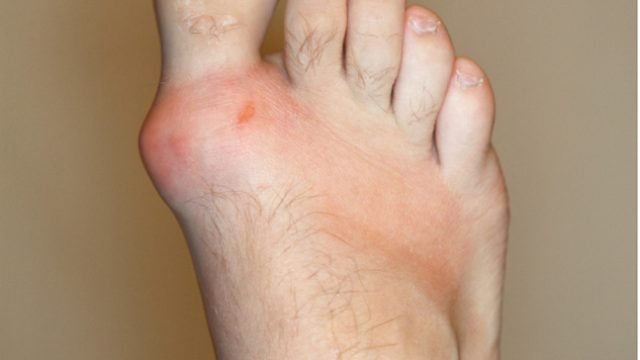 Gout is a disease which is caused by high levels of uric acid in the body that resulted to the formation of solid crystals within the joints. This metabolism produces episodes of acute pain. It is a type of arthritis that causes inflammation which affects the bones, especially in the fingers of our hands and feet. Gout usually attacks elderly but there are also many young people these days suffering from this condition.

In 2009, a study by Mount Sinai School of Medicine found that fried and processed foods contribute to the development of gout disease in the body by increasing inflammation. Cutting down the amount of these kinds of food in our diet, especially fried meats and other kinds of ready to fry frozen foods, while increasing our fresh vegetables and fruit intakes will not only help a lot in preventing this disease but will also improve our body’s immune defense.

According to healthline.com, some of the things found to be contributing to the build-up of uric acid in the blood are:

When uric acid accumulates in joints, it causes inflammation resulting to pain and discomfort. In addition, uric acid may also cause kidney problems. Fortunately, there are many easily accessible foods and herbs that can help prevent and fight gout such as:

Ginger was proven in many studies to help fight inflammatory. The best thing is that you can use ginger in different ways such as by cooking, mixing with salads, and even making a ginger tea. It can also be applied topically but eating ginger can reduce uric acid.

Celery was proven to be useful and effective in fighting urinary problems. However, experimental use for gout was also proven, especially its extracts and seeds because of its amazing cleaning capacity. It is well-documented to reduce inflammation. The seeds are rich in Omega-6 fatty acids and its oil really helps a lot in stimulating the kidney and in flushing out uric acid (that’s why it is a powerful diuretic) while also alkalizing the blood and lowering inflammatory conditions

A 2016 survey found that cherries, any kinds, are effective remedy for gout. Though more studies are needed to establish a solid conclusion, many people claimed cherries are really useful in reducing the pain due to gout.

A daily intake of one teaspoon of ACV in a glass of water was proven to be a good detoxifier that also flushes out uric acid from your system. Its malic acid was found to be very helpful in cleansing the body and breaking down unhealthy compounds such as uric acid.

Other foods/fruits/herbs that can also help fight gout are:

Hibiscus and other kinds of fruits and vegetables that are high in vitamin C.

Gout is somehow a common health problem these days. The thing mentioned above was proven to be a contributing factor to inflammatory due to the abnormal breakdown of the uric acid but probably there are other causes of gout which are not yet known. Therefore, consuming these foods on a regular basis is very important if you want to fight gout in a natural way. Lastly, consuming enough water also helps a lot in cleaning our body by flushing out toxins through our urine.