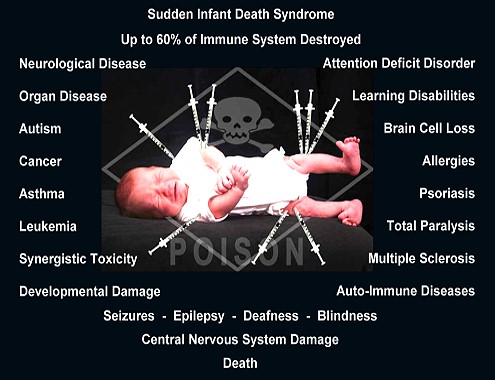 The Pentavalent vaccine has replaced the Hepatitis B and DPT primary vaccination schedule in the immunization programme. It is a 5-in-1 combination vaccine said to be fighting against Hib (Haemophilus influenzae type b), an alleged bacterium that said to cause severe infections such as Bacterial meningitis (inflammation of the membranes, that cover and protect the spinal cord and brain), Pneumonia (inflammation of the lungs), Septicaemia (presence of pathogenic bacteria in the blood), Septic arthritis (inflammation of the joints), Epiglottitis (inflammation of the area around the vocal cords and obstruction of the airway). Hib infection is said to spread from child to child “through droplets of saliva expelled when an infected child coughs or sneezes and also when they share toys and other things that they have put in their mouths”. However, the only problem is that there is no study proving that this is really the case.

The active ingredients of Pentavalent vaccine include Gelatine or human serum albumin, Aluminium, MF59 (squalene oil), an adjuvant, and Thiomersal, a mercury-based preservative “used to prevent the growth of bacteria and fungi which can contaminate from the environment when the vaccine is opened”. It also includes Gelatine, Sorbitol, and other stabilizers including sugar (sucrose), lactose (milk sugar), mannitol, glycerol (often used as a food additive), medium 199  (a solution which contains amino acids, mineral salts and vitamins. It also has arginine hydrochloride, monosodium glutamate, emulsifiers, and antibiotics such as neomycin, streptomycin, polymyxin b, gentamicin and kanamycin.

Given that these substances and agents look very “alien” to our body and may cause worst reactions that we can’t predict, it would make you try to ask why these things are being allowed to be injected to the human body. Isn’t it obvious that these ingredients are very dangerous to be used for a human body? Just recently, it was again reported that two infants died in the Philippines after being administered with the Pentavalent vaccine. There was certainly no given proof that the vaccine was the direct cause of these deaths but parents of these children could never see any other cause of their tragic end. And if you also try to check the “vaccine inserts”, some of these things were also listed as possible side effects. According to the story reported at We Did Philippines:

After getting vaccinated, she continuously kept on crying non-stop and that seemed not normal. She also slept while traveling back home. She had high pitched screams and cried for hours, the injected area was very inflamed and she was not able to move the leg. Her mother gave her Paracetamol which gave quick relief to baby Jhanella. She stopped crying and slept. She woke up several times during the night crying in pain. All of these symptoms are included in the vaccine inserts as possible adverse events after vaccination.

At 6 AM the following day, her mother noticed her nose bleeding with bubbles. She was rushed to a first hospital with weakening vitals but since there was no doctor on duty, baby Jhanella was sent via ambulance to a second hospital where she was dead on arrival. Her cause of death in the death certificate was hypoxia (brain was deprived of oxygen) and benign convulsions.

There was NO FULL INFORMED CONSENT before she was vaccinated. The full risks including injury/death, benefits, including if they didn’t vaccinate at all were not provided to the parents. There was no Vaccine Information Sheet (VIS) or vaccine product insert that explained the adverse side effects and signs to look out for post-vaccination. Her mother said of she knew there were side effects, she could have chosen not to have her baby vaccinated.

Baby Jhanella’s mother would like everyone to know about the vaccination system in the Philippines and let all parents who are unaware about vaccines know about its danger, so that nobody has to suffer the same situation as they did. And a lot of innocent children are already dying after vaccines.

The parents are seeking for justice and to let those who are responsible take accountability for the death of their child.

An independent autopsy was already conducted with the help of the Public Attorneys Office (PAO) Forensics. They are now waiting for the results.

You can also read the full interview of the parents here:

Another child was named Aliyah Alexia M. Amora. According to the report at We Did Philippines:

She was a sweet baby who loved to cling to her mother at all times. She was meeting her milestones and developing well. She could roll over and slowly pull herself up very early on.

On 11 March 2020, her mother brought her to the health center for her four-month vaccines. She was well and healthy before vaccination. Aliyah was weighed and her height was checked. She was vaccinated with Pneumococcal Conjugate Vaccine (PCV) and Pentavalent Vaccine (DTP-HepB-Hib). Not long after she was vaccinated, she developed a fever and became even more clingy and fussy than usual.

Her fever continued until the next day, 12 March 2020. She refused to drink her mother’s milk and had to be fed using a dropper. She became weaker and weaker, so she was immediately rushed to the nearest hospital. In less than an hour, Aliyah was pronounced dead.

She passed away on 12 March 2020, just 24 hours after her four-month vaccines. Her death was ruled as Sudden Infant Death Syndrome (SIDS) and Cardiac Arrest. There was no investigation or autopsy done to determine why Aliyah’s health rapidly deteriorated immediately after being vaccinated.

Her symptoms, including irritability, fever and decreased appetite are all included as possible adverse side effects in the PCV. The SIDS is also listed as a possibility in the vaccine insert.

There was also NO INFORMED CONSENT before the vaccines were administered. The full risks, the possible adverse effects, including death, were not shared to Aliyah’s mother by the health center staff. Hence, she was not aware what to look out for post vaccination.

Despite decades of cases like these ones, despite massive law suits in courts against the companies, health authorities and vaccine manufactures still deny the reality that aside from being not proven to be effective, vaccines are dangerous. Countless parents across the world have spoken out against the perils of this program through their own experience and yet, health authorities and manufacturers still push vaccination even to the point of coercion. Not only they lie and deny about the serious risks of vaccines, they also keep making laws and mandates that, first, secure them from accountability (if something bad happens to a child or if a child dies) and second, threatens the parents into allowing vaccination to their child.

The dirty tactics being done by the manufacturers and other pro-vaccine institutions are not only limited to shaming, demonizing, and antagonizing parents who choose not to vaccinate, they sometimes also spread outright lies through the media, the internet, and other outlets. For example, in India, in a brochure made for health workers, it was written:

Pentavalent vaccine has not been associated with any serious side effects. However, redness, swelling, and pain may occur at the limb site where the injection was given. These symptoms usually appear the day after the injection has been given and last from one to three days. Less commonly, children may develop fever for a short time after immunization.

Clearly, this is downplaying the fact that vaccines contain all sorts of ingredients that were not really proven to be safe and even effective. And to prove this point, we can try to take this statement from the same brochure itself:

Although serious side effects have not been reported, a child who has had a severe reaction to pentavalent vaccine earlier should not be given another dose.

Meanwhile in the UK, a government website listed these things as possible side effects of Pentavalent vaccine: redness, swelling or tenderness where the injection was given, fever, and sluggishness. It also stated that, “Most side effects begin shortly after the injection is given and go away within a couple of days. Side effects from the MMR (mumps, measles and rubella) injection do not usually show up until 5 to 12 days after the vaccination. Most side effects are mild and pass without treatment.”

But contrary to the brochure about Pentavalent vaccine being distributed to health workers in India, the UK website listed these things as “serious side effects” of the said vaccine:

It is important to keep in mind that these things happened for a very serious reason. And the serious reason is toxicity and other painful adverse reactions. A person won’t have “discolouration of legs” and will not suffer from very high and persistent fever if there is nothing “very bad” happened his or her system. A prolonged and intense or high-pitched cry of a child means the child is suffering from very painful side effects of a substance being administered. If a person faints or suffers seizures, it is not and will never be mild or “normal”. Therefore, it is time for health authorities to re-think and evaluate vaccination; to really investigate if these vaccines are truly safe and effective.