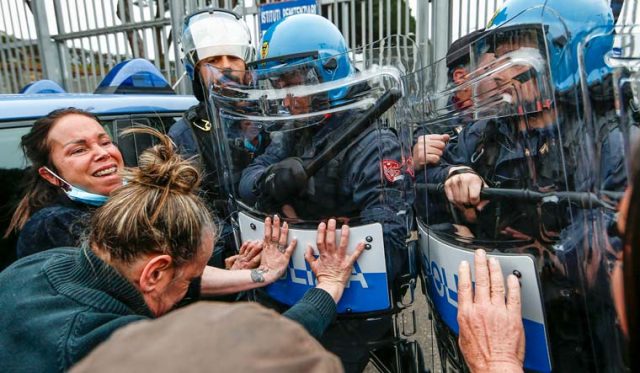 As Italy suffers from a serious recession, Italians are still being urged to adhere to the so-called safety protocols which caused the economic downfall in the first place. Despite Italian government faces harsh criticisms on many scandals regarding the country’s some leaders’ alleged involvement with the global industrialist elites, also known as “deep state” to some, who uses philanthropic approaches as a façade to economic colonization that not only exploit the local resources but also disrupts peace in communities, Italy is still currently being told to stay in their houses and obey the protocols.

Matteo Bassetti, head of the infectious diseases clinic at the San Martino hospital in the city of Genoa said: “The strength the virus had two months ago is not the same strength it has today. It is clear that today the COVID-19 disease is different.”

Meanwhile, Sandra Zampa, an undersecretary at the health ministry, said in a statement: “Pending scientific evidence to support the thesis that the virus has disappeared … I would invite those who say they are sure of it not to confuse Italians.”

“We should instead invite Italians to maintain the maximum caution, maintain physical distancing, avoid large groups, to frequently wash their hands and to wear masks.”

This is in response to Alberto Zangrillo, head of the San Raffaele Hospital in Milan, statement on RAI television. According to him:

“In reality, the virus clinically no longer exists in Italy,”

“The swabs that were performed over the last 10 days showed a viral load in quantitative terms that was absolutely infinitesimal compared to the ones carried out a month or two months ago.”

While the Italian government urged residents to do continue practicing social distancing and other safety measures, in Rome’s Piazza del Popolo, hundreds of citizens gathered to demonstrate their frustration and demand. The demonstrators flooded the streets on Tuesday, “ditching their masks in a protest against the Italian government’s lockdown restrictions aimed at controlling the spread of COVID-19”.

Some of the participants here are the Orange Vests’, led by retired Carabinieri general Antonio Pappalardo, who doesn’t believe almost to any of the said protocol. He also doesn’t agree with the mandatory wearing of masks especially to children. According to TIME, refusing to wear a mask himself, Pappalardo stated:

“These lungs mine. I will take care of my lungs. Breathing is sacred.”

Many of these Italians believe that the pandemic didn’t exist at all, claiming that politicians have played along for their own interests. These people on the protest didn’t obey to social-distancing guidelines set by the government. Many of them also didn’t believe in importance of the mask, including the speakers.

Meanwhile, another Italy’s political faction the League Party also demonstrated, “demanding that the government should resign”. This was lead by Party chief Matteo Salvini together with two other party leaders. According to a Facebook post by Salvini, the march was “a symbolic gesture to make heard the voices of the citizens who do not give up.” He was referring to the people who are pushing to bring the country’s economy back. Referring to the 750-billion-euro European recovery plan. he also stated, “There is an immediate need for money for the Italians, yet we are promised the recovery fund in 2021.” Then he added, “There can be no forgotten Italian workers.”