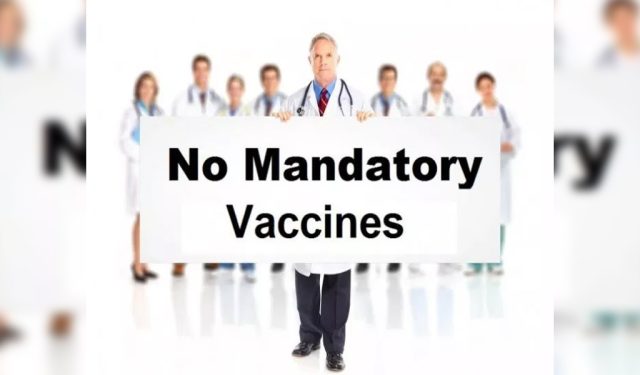 Bill Gates, Anthony Fauci, the World health Organization (WHO), and now many other leaders around the world are saying that “we can never go back to normal” until COVID-19 vaccine will not be successfully administered to the 90% of the population around the world. Because of this, many people ask: who are they to dictate and forcefully do this to ordinary citizens of the world? Since when do government institutions, the Rockefeller funded mainstream medical establishments and the rich pharmaceutical companies have the right to break the Nuremberg Code or the right of every individual to its bodily autonomy? The fact that many people do recover, and the fact that the reported death rates from this “disease” are inaccurate and proven to be just intentionally “inflated”, it is self-evident that COVID-19 vaccination is totally not necessary.

What is the Nuremberg Code and why it is important for people to know about this?

The Nuremberg Code is a set of research ethics and principles for human experimentation created as a result of the Nuremberg trials at the end of the Second World War, when the notorious doctor’s experiments were supposed to have come to an end. It established a set of guiding principles for the Right of the patient to be informed of their medical treatment options and to give their consent before any medical treatment could be performed.

Code 1. The voluntary consent of the human subject is absolutely essential.

This means that the person involved should have legal capacity to give consent; should be so situated as to be able to exercise free power of choice, without the intervention of any element of force, fraud, deceit, duress, over-reaching, or other ulterior form of constraint or coercion; and should have sufficient knowledge and comprehension of the elements of the subject matter involved, as to enable him to make an understanding and enlightened decision.

Code 6 also states: The risks should never exceed the benefits

According to Article 6 of the UNESCO 2005 statement on Bioethics and Human Rights:

Article 6, section 1: Any preventive, diagnostic and therapeutic medical interventions is only to be carried out with the prior, free and informed consent of the person concerned, based on adequate information. The consent should, where appropriate, be expressed and may be withdrawn by the person concerned and at any time and for any reason without disadvantage or prejudice.

To learn more about the Nuremberg Code, please go to this link:

Just recently, there was an announcement that “the imminent COVID-19 vaccine that could be “fast tracked” to general release as early as July this year, will skip animal testing and come straight to human live trials”. Of course we all know that with little or even no testing, recipients of this so-called cure will be risking its life and would probably left no one to go after when something happens. Besides being aware that there is no solid proof that vaccines are effective, the individuals and the institutions that force people to vaccinate, while earning millions (if not billions) of dollars know that vaccines do harm. This is obvious because of the ingredients themselves. During the H1N1 swine flu outbreak, this is what happened:

“As you may recall, a shocking one in 16,000 people who were given the so-called Pandemrix vaccine, a product of GlaxoSmithKline (GSK), were later observed to develop some combination of narcolepsy, brain damage and even death. Some individuals reportedly lost their ability to sleep for more than 90 minutes at a time, while others suddenly fell unconscious without warning. The result was that many victims ended up suing GSK, and in the UK, authorities agreed to pay out the equivalent of nearly $100 million in damages. The whole thing was a major fiasco, in other words, demonstrating once again that vaccines are hardly ever what they’re cracked up to be.”

Meanwhile, on its website, the Centers for Disease Control and Prevention (CDC) claims that “Vaccines Do Not Cause Autism”. However, studies have found between 40% and 70% of parents with an autistic child strongly believe that the vaccine is responsible. According to them, their child’s autism was due to vaccines given during the first six months of life. In an article from healingoracle.com, it was written:

“Vaccines given during the first six months of life, according to the CDC’s childhood vaccine schedule, include three doses each of DTaP, HepB, Hib, PCV13 and IPV, for a total of fifteen doses in these six months. In the summer of 2019, ICAN (informed consent action network) submitted a Freedom of Information Act (FOIA) request to the CDC for “All studies relied upon by CDC to claim that the DTaP vaccine does not cause autism. ICAN also submitted this same request for HepB, Hib, PCV13 and IPV, as well as requesting the CDC provide studies to support the cumulative exposure to these vaccines during the first six months of life do not cause autism. Despite months of demands, the CDC failed to produce a single study in response to these FOIA requests. ICAN was therefore forced to sue the CDC in federal court, where the CDC finally conceded, in a stipulation signed by a Federal court judge, that it has no studies to support that any of these vaccines do not cause autism.”

What is the CDC anyway?

According to Robert F. Kennedy:

“The CDC is actually a vaccine company. The CDC had a total budget of about 11 billion dollars a year and 5 billion of that buying vaccines from those four companies and making “sweetheart” deals at a much higher where we pay taxpayer money much more for the vaccines than they pay for the exact same vaccine in Europe and then they distribute those vaccines in the American public. So their approving the vaccine, they’re mandating for them for the public, they’re buying them from these companies whom they’re friends with and then they’re basically forcing millions, probably 8 million people to take an untested product.”

In 2014, the Economic Times India published an article about vaccination program by Bill Gates and others in India. Here is what they wrote:

“In 2009, tests had been carried out on 16,000 tribal school children in Andhra Pradesh, India, using the human papiloma virus (HPV) vaccine, Gardasil. According to the report written by KP Narayana Kumar, within a month of receiving the vaccine, many of the children fell ill and by 2010, five of them had died. A further two children were reported to have died in Vadodara, Gujarat, where an estimated 14,000 tribal children were vaccinated with another brand of the HPV vaccine, Cervarix, manufactured by GSK.”

Because of these horrible incidents, people around the world have become distrustful on vaccination and even angry about the institutions involved in these programs. As a response, the United Nations and the WHO have stated that people who are against vaccination “are among the top 10 global health threats of last year, 2019”. When Robert F. Kennedy was asked to comment, here is what he said:

“That’s part of pharma strategy to mandate vaccines for every man, woman, child in the world and to give us all ID’s and make it so that we can’t travel, we can’t drive a car, we can’t get an education, we can’t exercise our constitutional rights unless we coercively consume by force their untested, zero liability medical products. WHO, that’s really a misnomer, WHO is even more captured than CDC is. WHO gets half its budget from industry. It is absolutely controlled from top to bottom by the pharmaceutical companies, particularly the vaccine makers who use WHO, fabricate pandemics like the swine flu, like the H1N1 and make billions of dollars on pandemics that never happened and end up hurting a lot of people in the process and using the WHO to dump bad vaccines all over Africa.”

Now many concerned people, experts and parents alike, around the world are now starting to call for a global public refusal against mandatory COVID-19 vaccination. Aside from the reason that people cannot be really sure about its ingredients, historical records mentioned above tell a lot of horrific stories. According to healingoracle.com:

“Mandatory vaccination is a legal requirement to vaccinate, and to provide proof of vaccination, along with consequences for refusing. If an individual, or her or his children do not receive the required vaccine(s), they will be denied receipt of a government benefit they are otherwise entitled to, such as free public education.  Mandatory vaccination could also be enforced by way of a fine. Imposing penalties on, or denying benefits to, those who refuse to receive a vaccination is a violation of the Charter section 7 right to life, liberty and security of the person. If a person refusing a vaccine is doing so because of their religious or conscientious beliefs, it also violates freedom of conscience and religion as protected by section 2(a) of the Charter.”

There are probably more reasons why people do not trust these individuals and institutions and their vaccines. If you want to learn more about it, you should go to these links: