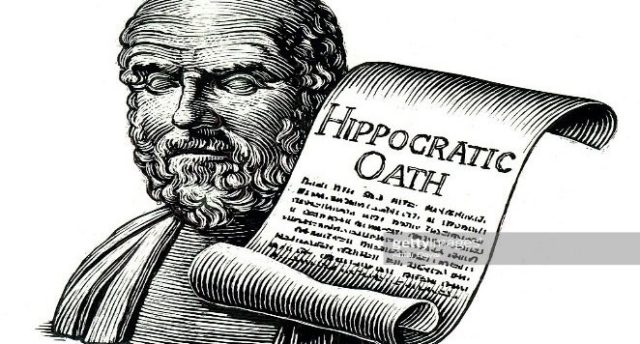 “Let thy food be medicine, and medicine be thy food”. This is what Hippocrates said. Indeed, a very important thing everyone, not only doctors, should always keep in mind. The Hippocratic Oath is a very important vow every doctor must consider and follow as it should guide all the medical establishments and industry so that people of all walks of life will not be harmed by any products or procedures being administered to them. As an essential reminder, all doctors are obliged to sign this when attending medical school.

Hippocrates didn’t write the Hippocratic Oath himself but it is one of the very important known Greek medical texts. Ideally, it encourages professionals to be loyal and to value ethical standards. “It also strongly binds the student to his teacher and the greater community of physicians with responsibilities similar to that of a family member”.

Widely regarded as the father of Western medicine and known for writing large body of medical textbooks, Hippocrates lived during 460 BC to 370 BC. According to widely accepted historical records, “Hippocrates lived after Pythagoras; at the same time as Socrates, Plato, and Democritus; and he was still alive during Aristotle’s early life”. Another very famous line associated with his name with regards to medical treatment is, “first, do no harm”.

The classic version you are about to read below was translated by Ludwig Edelstein from the Greek texts in 1943. However, it was revised several times and in 1960, the words “utmost respect for life from its beginning” was added to make it more secular, not to be taken in the “presence of gods” but in front of other people. If professionals would sincerely follow this, indeed, it would be very wonderful for us when it comes to our health and treatment!

I swear by Apollo Physician and Asclepius and Hygieia and Panaceia and all the gods and goddesses, making them my witnesses, that I will fulfill according to my ability and judgment this oath and this covenant:

To hold him who has taught me this art as equal to my parents and to live my life in partnership with him, and if he is in need of money to give him a share of mine, and to regard his offspring as equal to my brothers in male lineage and to teach them this art—if they desire to learn it—without fee and covenant; to give a share of precepts and oral instruction and all the other learning to my sons and to the sons of him who has instructed me and to pupils who have signed the covenant and have taken an oath according to the medical law, but no one else.

I will apply dietetic measures for the benefit of the sick according to my ability and judgment; I will keep them from harm and injustice.

I will neither give a deadly drug to anybody who asked for it, nor will I make a suggestion to this effect. Similarly I will not give to a woman an abortive remedy. In purity and holiness I will guard my life and my art.

I will not use the knife, not even on sufferers from stone, but will withdraw in favor of such men as are engaged in this work.

Whatever houses I may visit, I will come for the benefit of the sick, remaining free of all intentional injustice, of all mischief and in particular of sexual relations with both female and male persons, be they free or slaves.

What I may see or hear in the course of the treatment or even outside of the treatment in regard to the life of men, which on no account one must spread abroad, I will keep to myself, holding such things shameful to be spoken about.

If I fulfill this oath and do not violate it, may it be granted to me to enjoy life and art, being honored with fame among all men for all time to come; if I transgress it and swear falsely, may the opposite of all this be my lot.