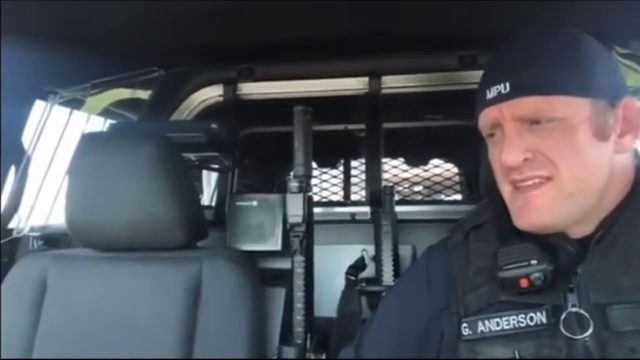 A video uploaded in Youtube by a police officer only known as G. Anderson (through his badge) is now circulating and gaining more views. In this video, he’s calling for his fellow law enforcement officers to not follow “tyrannical rules” being imposed because of the coronavirus crisis. Here are the words he said:

As a law enforcer, I’m compelled to make this video. I’ve been in law enforcement for 10 years and I’m speaking to my peers, other fellow officers, people in any kind of law enforcement position. I’ve seen officers nationwide enforcing tyrannical orders against the people. And I’m hoping it’s a minority of officers, but I’m not sure anymore coz every time I turn on the television, every time I look to the internet, I’m seeing people arrested or cited for going to church, for traveling on the roadways, for going surfing, opening their businesses, going to the park with their families, or doing nails out of their own house, using their own house as a place for business. And have an undercover agents go there and arrest them, and charge them with, with what? With the crime? I don’t know what crime people are committing by doing nails in their own house but we’re seeing this more and more, and we need to start looking at ourselves as officers and thinking: is what I’m doing right?

I wanna remind you that regardless of where you stand on a coronavirus, we don’t have the authority to do those things to people just because a mayor or a governor tells you otherwise. I don’t care if it’s your sergeant or your chief of police, we don’t get to violate people’s constitutional rights because somebody in our chain of command tells as otherwise. It’s not how this country works. Those are de facto arrest. You know, we’re violating people’s rights, and taking money from them or even worst arresting them and depriving them of their freedom when they are exercising their constitutional rights.

Then he proceeded to read the constitutional rights of the individual:

“All men are created equal. Among these, we have the right to life, liberty, and the pursuit of happiness… to secure these rights, governments are instituted among men deriving their power from the consent of the governed.”

Meaning our power and any government official’s power is derived from the people. We don’t hold power over our citizens. It’s contradictory to everything that our country stands for. And this is what I’m seeing, first amendments rights – telling people they can’t go to church, “freedom of religion”. Telling people they can’t protest, “freedom of assembly”. Fourth amendment violations, illegal traffic stops, to check for papers? What are you the “Gestapo”? Is this 1930’s Nazi Germany? You don’t get to stop people unless you have reasonable suspicion or probable cause that they have committed a crime. And I know people that have been personally been stopped, saying “we wanna see papers showing that you’re essential”.  That is not how our job works, OK?

What really has been pissing me off lately is the fact that these officers that are going out here and enforcing these tyrannical orders, what they’re doing is they’re putting my job and my safety at risk. Because what you’re doing is you’re widening the gap between public trust and law enforcement officers. Look what’s happened to the law enforcement for the last 10 years, less and less public trust and more often than not, that is a result of isolated incident that gets blown out of proportion. They are not isolated anymore. They’re happening every single day. And the thing that I want you guys to realize is that our power, that we hold as law enforcement officers, is nothing more than a façade. It’s a badge and a gun. You don’t realize if you haven’t live in an anarchy, if you haven’t seen combat, things can be stripped from people in a heartbeat. And that’s what I’m afraid of. I’m afraid that these actions are going to awake a “sleeping giant”, i. e. the American people. They’re going to be put in a position where they won’t have their rights trampled anymore. And us as law enforcement officers will have our ability to enforce the law stripped from us in about ten minutes.

I think what is gonna happen if this continues is we’re gonna see bloodshed in the streets. OK? I don’t want to see bloodshed on the streets on either side of this coin; I don’t want to see fellow officers get injured or killed and I certainly don’t want to see citizens get injured or killed. And I promise you, most of you out there doing these tyrannical acts against our citizens, you’re not ready for combat, you’re not mentally or physically ready for combat in the first place. I promise you you don’t wanna go through that and I hope I never have to go through that again.

You don’t get to just say, “well I’m doing this because I was told to do so. Or I’m following orders. Or I need to keep this job.” Guess what, I need to keep this job more than anybody, I have three young children, I have 2 houses. Like, I have the same sub-story that the rest of you guys have. But my personal choices and my living arrangements, no matter what they are, don’t allow me to trample on people’s rights. And I don’t understand why that concept is so hard for people to understand. Listen, you need to stand up for what’s right. If you’re part of a department or an agency that is asking people or asking their officers or their deputies to impose on people’s rights and infringe of their freedoms, you need to step up and say “No! That’s not me. That’s not what I signed up for and that’s going against my oath.” And if that cause you your job, so be it. At least you will be able to look at your self in the mirror.

I’ve already expressed this to my department. And luckily for me, I come from a department that I feel like my chain of command shares my point of view. But I don’t  care what department you’re part of or what your chain of command thinks. You don’t get to trample on people’s liberty. As a Special Operations Veteran, I fought on the streets of Iraq for under the US’ government’s guise of freedom, I’m telling you what, you’re gonna wake a sleeping giant and they’re gonna fight ten times harder for their freedom on their soil than anything you’ve ever seen before. And if that’s something you’re willing to face, then keep trampling on people’s rights. But I promise you, the American spirit of defiance is going to rise again. And it’s gonna be a big problem for our country.

So I’ll leave you with this, something that I learned in the army, no matter what situation you’re put in, if you look inside your self and ask your self one question, “am I doing the right thing?” You ask your self that, you know the answer. And no amount of money or no order or law or anything should be able to make you go against doing the right thing. So I’m employing officers to look inside themselves and ask themselves, “is this what I wanna be doing to my citizens?” And I think the answer is clear. And if we all stand up together, guess what, it will be a non-issue. No factor. Because people in law enforcement will be united like we should be.