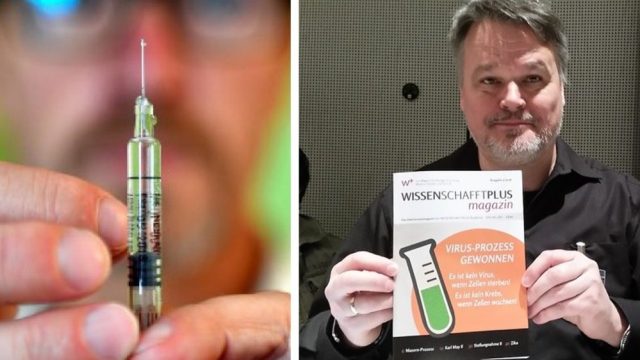 Even up to this day, there is still no scientific evidence that vaccines are effective against the so-called “viruses”. The reason why this claim has no solid scientific basis is that there are no proofs itself that these biological agents what they call “viruses” cause diseases in the first place. In 2001, a German molecular biologist named Stefan Lanka and his colleague named Karl Krafeld wrote a book entitled “Impfen – Völkermord im dritten Jahrtausend?” (Vaccination – Genocide in the third millennium?) in which they claim that this is the case. And as one of the validations for this claim, in 2017 the German Federal Supreme Court has made a final decision agreeing that there wasn’t enough evidence to support that the “measles virus” exists. In this court trial, Dr. Lanka even offered to pay 100,000 Euro for someone who can prove the opposite.

Here is the short chronology of the event:

“On March 12, 2015, the District Court Ravensburg in southern Germany ruled that the criteria of the advertisement had been fulfilled ordering Dr. Lanka to pay up. Dr. Lanka appealed the ruling. On February 16, 2016, the Higher Regional Court of Stuttgart (OLG) re-evaluated the first ruling, judging that Dr. Bardens did not meet the criteria since he failed to provide proof for the existence of the measles virus presented in one publication, as asked by Dr. Lanka in his announcement. Therefore, Dr. Lanka does not have to pay the prize money. On January 16, 2017, the First Civil Senate of the German Federal Court of Justice (BGH) confirmed the ruling of the OLG Stuttgart.”

During the “measles virus trial”, the head of the National Reference Institute for Measles at the Robert Koch Institute (RKI) named Dr. Annette Mankertz admitted an important fact that “may explain the increased rate of vaccination-induced disabilities, namely of vaccination against measles, and why and how specifically this kind of vaccination seems to increasingly trigger autism”. There were five experts who presented the results of the scientific studies appointed the higher court. These five experts, one named Prof. Dr. Andreas Podbielski, “consistently found that none of the six publications which were introduced to the trial contains scientific proof of the existence of the alleged measles virus”. This was confirmed independently by two recognized German laboratories, including the world’s largest and leading genetic Institute, proving that “the authors of the six publications in the measles virus case were wrong, and as a direct result all measles virologists are still wrong today”:

The six publications submitted in the trial are the main relevant “scientific paper” on the subject of “measles virus.” According to the decision, the claim that ordinary components of cells are part of the suspected measles virus is a misinterpretation. This attempt to determine pathogenic viruses is a common mistake in the field of virology today according to Dr. Lanka. He also suggested that:

“Because of this error, during decades of consensus building process, normal cell constituents were mentally assembled into a model of a measles virus. To this day, an actual structure that corresponds to this model has been found neither in a human, nor in an animal. With the results of the genetic tests, all thesis of existence of measles virus has been scientifically disproved. Any national and international statements on the alleged measles virus, the infectivity of measles, and on the benefit and safety of vaccination against measles, are since then of no scientific character and have thus been deprived of their legal basis.”

According also to Dr. Lanka:

statements on the alleged measles virus, the infectivity of measles, and on the benefit and safety of vaccination against measles, are since then of no scientific character and have thus been deprived of their legal basis.”

“For almost one year we have been asking authorities, politicians and medical institutes after the scientific evidence for the existence of such viruses that are said to cause disease and therefore require “immunization”. After almost one year we have not received even one concrete answer which provides evidence for the existence of those “vaccination viruses”. The conclusion is inevitable that our children are still vaccinated on the basis of scientific standards of the 18th and 19th century. In the 19th century Robert Koch demanded in his generally accepted postulates evidence of the virus in order to prove infection; at Koch´s time this evidence couldn´t be achieved directly by visualization and characterization of the viruses, because adequate technology wasn´t available at that time. Methods of modern medicine have profoundly changed over the past 60 years, in particular by the invention of the electron microscope. And still all these viruses we get immunized against have never been re-examined using this technology?”

In the United States and many parts of the world, Measles, Mumps, and Rubella (MMR) vaccine is given to children between 12 to 18 months and then followed when they reach the ages 4 to 6. This is strongly being “pushed” by the World Health Organization (WHO) and the Centers for Disease Control and Prevention (CDC) with the financial backing of course by the Bill and Melinda Gates Foundation (BMGF). However in the CDC’s own data from 2003, Brian Hooker’s research in the Translational Neurodegeneration Journal revealed a 340% increased risk of autism in African-American children following the MMR vaccine. This study also “provides the most recent epidemiological evidence showing that African American males receiving the MMR vaccine prior to 24 months of age or 36 months of age are more likely to receive an autism diagnosis”.

Meanwhile, a CDC whistleblower named Dr. William Thompson also confirmed that “the CDC knew about the relationship between the age of first MMR vaccine and autism incidence in African-American boys as early as 2003, but chose to cover it up.” He also stated that they’ve “missed ten years of research” because the CDC is so paralyzed then by “anything related to autism” and that the CDC “is not doing what they should be doing because they’re afraid to look for things that might be associated.” He “alleges criminal wrongdoing by his supervisors, and he expressed deep regret about his role in helping the CDC hide data”.