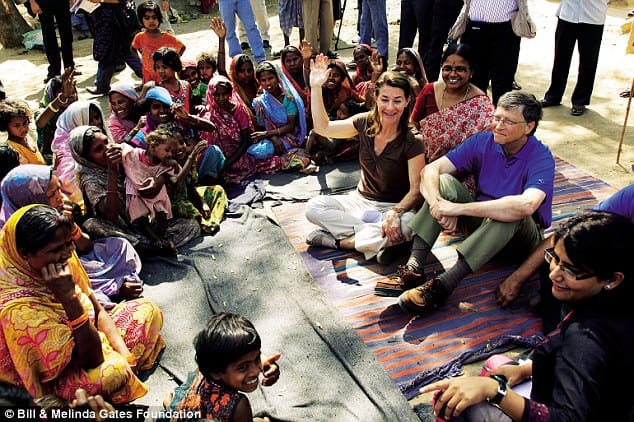 Like John D. Rockefeller, Bill Gates managed to construct his public image as a humanitarian philanthropist through the help of massively funded PR campaigns. By buying good publicity, he has transformed himself into a modern-day saint, supposedly championing for the health of the public. Through his Bill and Melinda Gates Foundation (MBGF), he spends tens of millions of dollars every year sponsoring media coverage with his programs across the world. In the Corbett Report, it was said:

“In some regards I guess you might say that there is not a heck of a lot of things you could touch in global health these days that would not have some kind of Gates tentacles.”

Apparently, this is very true. For example, the Gates foundation sponsored the meeting that lead to the formation of GAVI or the Global Alliance for Vaccination and Immunization. On its definition, it says that it is “a global public-private partnership bringing together state sponsors and big pharmaceutical companies whose specific goals include the creation of healthy markets for vaccines and other immunization products”.

James Corbett went on to continue:

“As a founding partner of the alliance, the Gates’ foundation provided $750M in seed funding and has gone on to make $4.1 in commitments to the group. Gates provided the seed money that created “The Global Fund – To fight AIDS, tuberculosis and malaria” a public-private partnership that acts as a finance vehicle for governmental AIDS, TB, and malaria programs.”

Elaborating about how the BMGF is being used to influence health policies and responses around the world, James Corbett stated:

“When a public-private partnership of governments, world health bodies and thirteen leading pharmaceutical companies came together in 2012 to accelerate progress toward eliminating or controlling ten neglected tropical diseases, there was the Gates foundation with $363M in support. When the Global Financing Facility for women, children, and adolescents was launched in 2015 to leverage billions of dollars in public and private financing for global health and development programs, there was the BMGF as a founding partner with $275M contribution. When the Coalition for Epidemic Preparedness Innovations (CEPI) was launched in the economic forum in Davos in 2017 to develop vaccine against emerging infectious diseases, there was the BMGF with an initial injection of $100M.”

In the current coronavirus crisis, Bill Gates also uses his money to influence the decision making. Because of this, many people are asking: does this indicate that COVID-19 is really a planned crisis? Aside from the simulation “Even 201”, which the BMGF was also involved financially together with the World Economic Forum, it is also noticeable that the final solution to the so-called pandemic that the world is heading towards is global vaccination; a campaign which Bill Gates and other global elites connected to the pharmaceutical companies like the Rockefellers has been advocating for decades. To further connect the dots, here is what the Corbett Report has to say:

“It comes as no surprise then that far beyond the $250M that the BMGF has pledge to the fight against coronavirus, every aspect of the current coronavirus pandemic involves organizations, groups, and individuals with direct ties to Gates’ funding. From the start, the WHO has directed the global response to the current pandemic. From its initial monitoring of the outbreak in Wuhan and its declaration in January that there is no evidence in human to human transmission, to its live media briefings and its technical guidance on country-level planning and other matters, the WHO has been the body setting the guidelines and recommendation shaping the global response to this outbreak.”

To help people understand how the BMGF injects money to the WHO, James Corbett proceeded:

“But even the WHO itself is largely reliant on funds from the Bill and Melinda Gates Foundation. The WHO’s recent donor report shows that the BMGF is the organization’s second largest donor behind the US government. The Gates’ foundation single-handedly contributes more to the World Health body than Australia, Canada, France, Germany, Russia and the UK combined.

What’s more, current WHO’s director general Tedros Adhanon Ghebreyesys is in fact like Bill Gates himself, not a medical doctor at all but the controversial ex-minister of Ethiopia who is accused of covering up three cholera outbreaks in the country during his tenure. Before joining the WHO, he served as chair of the Gates’ founded global fund to fight AIDS, tuberculosis and malaria and sat on the board of the Gates’ founded GAVI, the vaccine alliance, and the Gates’ funded stop TB partnership.”

“The work of two “research” groups was crucial in the decisions of the UK and the US government to implement wide-ranging lockdowns and in turn, governments around the world. The first group, the Imperial College Covid-19 research team issued a report on March 16 that predicted up to 500,000 deaths in the UK and 2.2 million deaths in the US unless strict government measures were put in place. The second group, the Institute for Health Metrics and Evaluation (IHME) in Bill Gates’ home State of Washington helped provide data that corroborated the White House’s initial estimates of the virus’ effect, estimates that have repeatedly downgraded as the situation has progressed. Unsurprisingly, the Gates Foundation has injected substantial sums of money into both groups. This year alone, the Gates Foundation has already given $79, 006, 570 to Imperial College. And in 2017, the foundation announced $279 million investment into the IHME to expand its work collecting health data and creating models.”

To see the full video of the Corbett Report, go to this link: