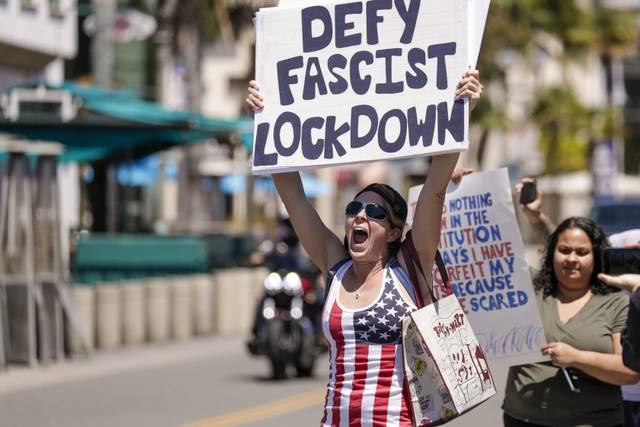 Thousands of people in Michigan are now rising up against the ‘Stay-at-Home’ policy which was ordered by Governor Gretchen Whitmer and is now being extended until April 30. This means that the so-called non-essential businesses must remain closed and people would still not be allowed to go out to do their normal activities, including the important ones, even if they would practice proper protocols to avoid infection. One sign says, “Governor, we are not prisoners!” It was said that Michigan’s lockdown was among the strictest ones in the US

The protest was first named “Operation Gridlock”, mainly organized by the Republican-aligned Michigan Conservative Coalition. According to one representative, Meshawn Maddock:

“This arbitrary blanket-spread of shutting down businesses, about putting all of these workers out of business is just a disaster; and economic disaster for Michigan and people are sick and tied of it, and they’re fed up.”

“Quarantine is for the sick, not for the healthy. It’s time to open up.”

“I am a small business owner, my business was shutdown forcibly on the 17th of March and I have yet to see any unemployment, any money come through the government and I’m sitting right here without a paycheck, with no definitive answer and when I will be returning to work and that I don’t think that’s right.”

“I believe the messaging on TV is so much propaganda. The protest was for every citizen in the state, regardless of political affiliation, and all the businesses and the men and women who want to support small businesses.”

“Media would have you believe this is a feel good time with all the messaging on TV like ‘We’re in this together,’ ‘One Minnesota’ [Walz’s campaign slogan] or ‘home alone’ or whatever their propaganda is. But media doesn’t cover the lives of people shattered by the shutdown. Small businesses are the backbone of the country … the messaging coming out of the governor’s mansion is stay at home. So much guilt and shame it’s unbelievable.”

On April 18, there were also several hundreds of people who supported the call for demonstration in Austin, Texas. It was dubbed, “You Can’t Close American” rally and many people attended, including the famous anti-globalist journalist Alex Jones. Jones and others called out the World Health Organization (WHO) and other major health institutions corruption and bureaucracy. They also vented out against Bill Gates involvement on this so-called pandemic and said that Gates, along with other global elites, have planned this and that they are using money to influence both the Centers for Disease Control and Prevention (CDC) and WHO to deceive people by skewing data regarding the COVID-19 death rates. Many protesters talked about the CDC guidelines; that even if the death of a patient is not caused by coronavirus, hospital officials are instructed to put COVID-19 just to inflate the rate and make people afraid.

When asked by independent journalist Gary Faust in an interview if she thinks that the big pharmaceutical companies in general are making money off the crisis, a woman in a burka-like costume answered:

“That’s the whole point of this, I think. One is to give up our liberties, all types of freedom and get used to living like this and doing whatever somebody on TV tells us to do. And the other is so that we will be begging for vaccinations and drugs from the pharmaceuticals.”

Seeing these protests, there is no doubt that people in many places in not only America but the whole world are now beginning to see the fact that everything the media is saying is all but a lie. There are even unlimited citizen reports keep coming out in Youtube and other social media platforms everyday showing that most hospitals in the world are not really having so much coronavirus patients and that the news are just exaggerating their reports to make people believe that there is really a deadly virus spreading around; that people are lining up and dying every day in hospitals just to make them afraid. However, unfortunately many still do not see that this crisis is, apparently, not what it is being reported by the media. That there is really no crisis happening in the hospitals around the world.