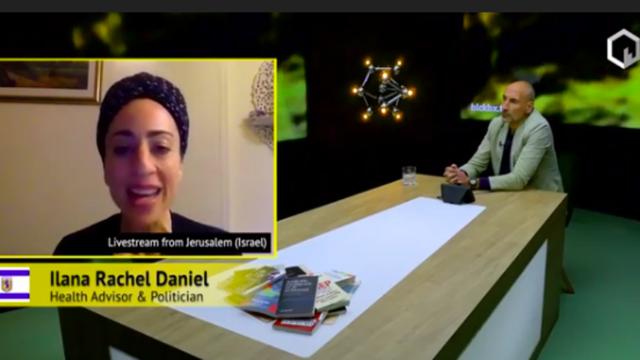 On March 3, a short audio recorded by Ilana Rachel Daniel, a health advisor and information officer for the Rappeh (meaning heal in English) political party in Jerusalem, circulated in social media telling about the dire situation in Israel after the government passed a law enabling them to share the names, addresses, and contact details of citizens who hadn’t received a coronavirus vaccine with other institutions, both private and public. In the audio, Daniel explained:

“They’re making this green passport where half the population cannot get into theaters or malls or all sorts of things unless you have taken the vaccination. They are creating a medical Apartheid.

They’re making people wear an ankle bracelet, a security bracelet when they come back from travelling. It’s absolutely insane.”

The ankle bracelet that is being required for people returning from travels is produced by a company called SuperCom.

Meanwhile, Daniel also stated that the Israeli government is censoring the media and also took away the medical license of the head of Rappeh. In an interview by BLCKBX (link below) published on March 10, Ilana Rachel Daniel further explained how things are going now in Israel as the government is still rolling out the vaccination scheme. She stated:

“It’s called the Green Passport. We’re not told to wear it but what they have done is they have essentially overnight created a second-class citizenry. A true medical apartheid that is disallowing health law abiding, tax-paying citizens from entering their places of culture if they do not participate in this experiment.”

Talking about the vaccination program, Daniel also explained how the Israeli government uses fear tactics to manipulate people into taking the shots through using fake news:

“Pressuring kids from age 16 and up and women, pregnant women literally radio messages… “Come, come and get vaccinated! You’ll save your baby.” You know, and the night before they roll out the program it’s this, for the first time in the year they put out news articles that say: “Oh we suddenly have 30 some pregnant women in critical conditions in the hospital.

“There is a contract. There is an actual physical contract between Pfizer and our government. We’ve seen only a redacted version. What we know is that there is a penalty clause. They must. Right now the government of Israel is acting incredibly desperately because they have some sort of quota of people they must reach, that they must inject. I don’t know what this penalty clause entails. Obviously, it must be something more terrible than risking health of generation and the generations to come of your entire people, but we know that that exists and we know that they are in a situation where they feel a lot of pressure and so they’re acting foolishly and more and more extremely. They are sending out messages offering people a slice of pizza to get their injection. It’s just a twilight zone!”

In Israel, as explained by Daniel, the health ministry is not monitoring the after-effects of their vaccination program and the citizens are not being offered informed consent or the ability to decide based on risk and benefit assessment before vaccination; the people didn’t have the chance to clearly understand the important matters, meaning the possible side effects and adverse events, before getting the jab. Daniel added that the entire COVID vaccination process for each individual is only about 15 minutes:

“What is happening is they are given an injection set for 15 minutes; 15 minutes and then sent on their way. There is no paper, there is no list of side effects to look out for, and there is no number to call. The data is not being reported, there are a number of citizen efforts that have been made to record what our ministry of health is not recording. Only the most extreme things come into the news and they’ve stop that even.

The Israeli news, according to Daniel, also denies that there is a correlation between Pfizer’s vaccine and the cases of Bell’s Palsy and the death of the elderly people due to heart failure. Even the Israeli health workers, Daniel said, are not allowed to talk about these grim vaccine related events which are also being reported from many parts of the globe. She continued:

“I know people personally who work in medical facilities who watched a 40-something year old people died of heart failure two days after injection. And they’re not allowed to say that it had anything to do with this vaccine. It’s absolutely a menace. If you get shot in the head but you test positive for COVID, you’ve died of COVID. But if you die of heart failure within 2 weeks after getting the injection, it has no correlation. We’re living in a dream world and we deserve better. All of us deserve better.”

When asked regarding the human rights situation and if she thinks Israel is still a “free and open society”, Ilana Rachel Daniel answered:

“No, absolutely not… people are absolutely terrified for what will be from one day to the next, for what will be in the future for our children. The divisions are so extreme, are so unreasonable, and I think that even people who have signed up and taken this injection are starting to see that because it is so extreme and the government is acting so desperately. But you know right now if you walk out without mask it’s the same stories that you hear all over. You have people who are willing to scream at you in the street, and that’s only the beginning. And they’ve succeeded in putting this narrative that you are a risk, a walking germ-filled risk if you walk into somebody’s store without taking this injection which is of course, has no opportunity to stop transmission; it’s not what it’s made to do.”

To watch the full interview, go to this link: