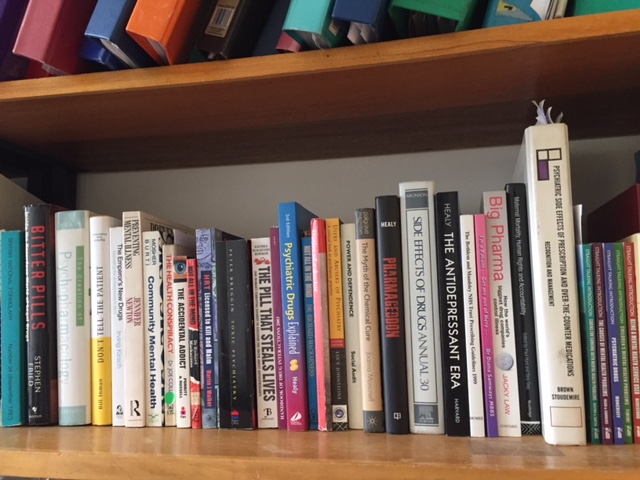 According to Robert Whitaker, the author of the best-selling Mad in America and Anatomy of an Epidemic, two books about the history of psychiatry and the impacts of psychotropic drugs, a 2017 scientific study that was originally aimed to “defend the long-term use of antipsychotics” found out instead that up to now, despite of more than five decades since it was introduced, psychiatry “still don’t have good evidence” that these drugs work in short term in first episode patients. He also added that evidence shows that long term use of these psychiatric drugs “cause net harm”. Whitaker explained:

“When you look at the short-term studies of antidepressants and antipsychotics, the evidence of efficacy in reducing symptoms compared to placebo is really pretty marginal, and fails to rise to the level of a “clinically meaningful” benefit.”

Furthermore, he also added that studies about these drugs do not have real placebo groups but instead, “patients who have been withdrawn from their psychiatric medications and then randomized to placebo”. In short, the placebo group is a drug-withdrawal group. He then continued:

“…we know that withdrawal from psychiatric drugs can stir myriad negative effects. A medication-naïve placebo group would likely have much better outcomes, and if that were so, how would that placebo response compare to the drug response?”

Dr. Peter Gotzsche, a medical doctor and also an author exposing big pharmaceutical companies also claimed that research suggests that patients shouldn’t be using antipsychotics, adding that “it’s easier to get off from heroin than psychiatric drugs”. In his interview in a film entitled Medicating Normal, Dr. Gotzsche stated:

“There is lots of research on harms of anti-psychotic drugs. We know so much about these drugs that we, in my opinion, actually should not use them. I think we can do well without anti-psychotic drugs. They don’t cure anybody but in many cases, they make a temporary psychosis into a permanent chronic problem. When you take them for a long time, you can acquire a breakthrough psychosis, super sensitivity psychosis; so that you actually develop a psychosis because of the drug you are taking which was supposed to work for your psychosis. So it’s a double-edged sword. And if a patient terribly disturbed and hasn’t slept for three or four days, you can give that patient a benzodiazepine. You don’t need to give that patient an anti-psychotic.

And when I lecture for patients and ask them: next time you get a psychosis, what would you want, a benzodiazepine or an anti-psychotic drug? So far not a single one has said an antipsychotic drug. They want a benzodiazepine because they are not so dangerous. So why is it we don’t do what the patients want? This is inhuman and it is discriminatory. So one of the things we should get rid of in psychiatry is definitely forced treatment with drugs because we cannot argue that we give these drugs for patient’s own benefit.”

Meanwhile on January 18 of this year, the American Psychological Association (APA) has issued an apology for “decades of psychiatry’s structural racism” to the developing world which harmed indigenous communities and people of color, both adults and children, around the world. This harm of course includes reckless administration of various strong psychotropic drugs, sometimes just for the sake of non-consensual medical experimentation. Though when we try to look at history, this didn’t happen in the third world only but also in the US and in Europe as well. For example, a decade ago, Dr. Mary Ann Block, the Medical director of The Block Center, an international clinic for the treatment of chronic health problems in children and adults, and also a top-selling author and a long time activist who speaks out against “psychiatric abuse”, stated in an interview:

“The antipsychotics are now being given to young children to control behaviour and these children are not psychotic, they’re not schizophrenic. They’ve gone through all the other psychiatric drugs, they’ve been on Ritalin, Adderall, Dexedrine, and Strettera and combinations of those. And those drugs didn’t work so now they’re going to the stronger drugs and these drugs, they’ve not been tested on children, not indicated or approved for children at all. And as you said, they can cause diabetes and there’ve been deaths associated with these drugs. So it comes back to what I say, or what I call “lazy medicine”.

The family takes a child into the doctor, usually on the teacher’s request, that the child is fidgeting or hyper or can’t focus and concentrate and instead of the doctor doing a full history, physical exam, lab work, allergy testing to try to find the cause of this child symptoms, they simply listen to the symptoms, give the child a psychiatric label like ADHD, write out a prescription for a psychiatric drug and that family is out of that office in minutes. That’s “lazy medicine” to me.

They definitely have problems and we’re not ignoring that at all but what I try to do at Block Center is find the cause and fix the problem, not cover symptoms with psychiatric drugs. And these psychiatric drugs, not just the antipsychotics but the Ritalin, the Adderall, the Strattera, all come with a host of potential side effects that can be life threatening.”

Aside from what the actual study shows regarding the short term and the long term effect of these drugs, how about stopping these drugs, what are the consequences? In another interview in the film Medicating Normal, Dr. Kelly Brogan MD, a Manhattan-based holistic women’s health psychiatrist and author of the book A Mind of Your Own: How Women Can Heal Their Bodies to Reclaim Their Lives said:

“These medications are driving the very epidemics that they are claiming to treat. Including data that shows that for every 23 patients, this is a Yale data, 23 patients treated with an antidepressant, one bipolar patient is born. So we are creating and generating epidemics of mental illness that wouldn’t exist without the treatments that we’re offering. And this is called “iatrogenesis”; this is called “doctor-driven harm”.

And I have witnessed in my practice many patients who developed symptoms during treatment but particularly during discontinuation that they never had before medication treatment. And these symptoms can include everything from suicidality to intractable depression. There are patients who have never struggled with depression, who were treated with antidepressants for insomnia, for example, and to end up five weeks later committed suicide. So this is something that we have to reckon with.

Essentially the challenges of a medication taper often leave patients trapped and in a kind of set of clinical handcuffs because they’re symptomatic on medication and then they cannot come off it. Of course it’s my passionate belief that if we address holistic principle for healing, that we actually improve patient’s ability to come off from medication. But I certainly could not promise or guarantee that it’s always a possibility. And this is why I believe most passionately, in patients who are thinking about initiating these medications, that they must be informed of the full picture of what it is that we know their habit forming potential and the very unpredictable nature of their side effects.”