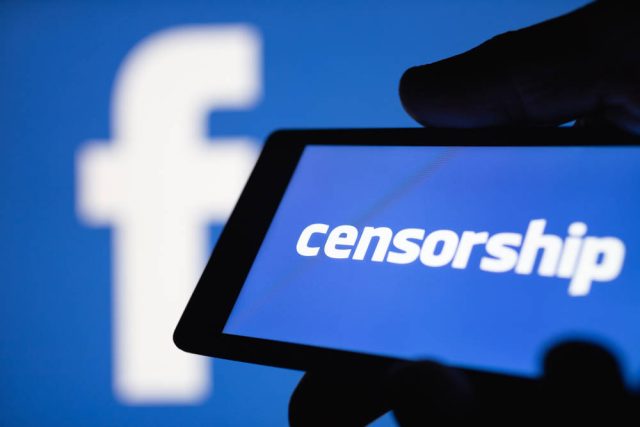 CNBC reported recently that Facebook has announced its new policies against health pages or groups giving advice to its users and also to groups that are advocating violence. The report said that Facebook will limit the exposure of these health groups and to its recommendations stating “it’s crucial that people get their health information from authoritative sources.”

However, many Facebook users, especially those who are familiar with naturopathy and holistic health care are skeptical; expressing that the company is not really doing the censorship because they are concerned with the health of the general public but in reality “they are forced to censor information” regarding CV19, vaccine, and about health in general. While slandering these groups by deceptively connect them with violent organizations, Facebook proves its allegiance to the elite by participating and protecting the real suspects of the crimes we are witnessing.

“This move comes as Facebook has struggled to moderate groups, including a militia group in Kenosha, Wisconsin, that used Facebook to organize an event where two people were killed in real life. Facebook said it removed the pages tied to that event after it happened, blaming an “operational error” for allowing the event to stay up despite the fact it violated the company’s policies. But BuzzFeed later discovered that Facebook did not remove the pages; one of the group’s admins did. It was only then that Facebook admitted it never took the event down.”

It isn’t so much of a secret that Mark Zuckerberg has recently been called to the hearings in the US Congress to justify and defend Facebook’s actions to censor information that counters the “official narrative” regarding vaccine, coronavirus, and health in general. As accused by many, its fact checking scheme is mere blatant censorship without real credibility whatsoever, favoring instead the mainstream allopathic medicine which is obviously more harmful and expensive compared to holistic ones. According to one user named Melanie, “the pharmaceutical industry is powerful and wants to stay that way. I’m sure their influence has made it hard for alternative methods, especially natural/plant based, to be allowed by this puppet”, referring to Mark Zuckerberg.

“They have never even once deleted a threat of violence against me when I comment on political stories. Not even once. But I have been censored numerous times for posting about holistic treatment.”

Anyone can see that unequal treatment which is now being silently endured by many, just to satisfy their illusion while also forgetting that health approaches which are natural and non-synthetic based are already available but it just need a little bit more push from the grassroots. Speaking about how the social media platforms lie, another user named Kim said:

“You know they’re lying and hiding the truth when they want to censor others. Fortunately, most people know these mainstream social media platforms are liars.”

Meanwhile, a user named Debra also commented about the double standard by Facebook on the issue of violence as it is still catering people like Bill Gates who keeps talking about population control; a word that also means genocide if you look at it in a different perspectives:

“I have not seen those i read giving health advice and being violent. Maybe I missed something but those trying to say that you need to build immunity or those with essential oils they are not violent. Maybe there were some that were violent. But again Bill Gates can say population control that’s pretty violent. So why not tell him that’s not a good phrase to use. Population control…”

What others try to say is that Facebook censorship seems to infantilize users, telling them they cannot decide on their own and they cannot be informed about the facts regarding health and medicines. Facebook offer groups, according to one user named Ruth, therefore “they cannot easily close or disqualify people from sharing vital information”, especially when it is proven scientifically true or correct and not dangerous or destructive to its receivers. Besides, it is also very insulting to the experts or to the people who really know the truth and that are trying to spread these messages about health to the wider audience.

Recently as well, thousands of parents and users also criticized Facebook, along with Twitter and Tik Tok for tolerating pedophiles on their platform, practicing their predatory perversion while lurking beneath the deepest part of social media. One user named Luze commented, “He doesn’t crack down on pedophilia! Sites reported with young children in provocative poses and when report people received notice “doesn’t not break the community guidelines!” Go figure! On yes I also forgot, Zuckerberg was on the Epstein flight log…”. Still regarding Facebook’s seemingly total tolerance to pedophilia, another user named Madonna wrote, “And yet pages like ‘cute boys’ remain up. They’ll censor truth but allow pedophilia to run rampant. I see them clearly for who….and what….they are.”

This repression of information is sickening, another user said, emphasizing that “so much informed personal healing happens in the serious Facebook groups focused on health and healing. It’s been a gift of FB.” Facebook and other social media platforms are, in fact, have become mere propaganda mouthpieces for big pharma. Meanwhile, talking about the Black Lives Matter or BLM protests, a user named Linda commented, “they censor truth, which includes health advice but they are cheering on the fires and violence”. Lastly, a user named Lynn also wrote, “cracking down on groups that Promote violence???? And they allow BLM?? Such a glaringly obvious double standard. Thankfully people are waking up to this farce.”