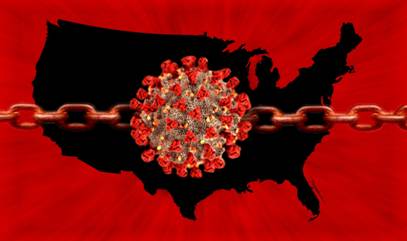 Under the protection of the Treaty of Universal Community Trust, a Sovereign Grand Jury was virtually assembled in a secure session in the British Isles to gather evidences, discuss, and scrutinize the UK government’s response and policies regarding the alleged COVID 19 outbreak. The jury was asked to rule and decide to start a formal Grand Jury Investigation whether there was sufficient evidence of pandemic fraud based on the evidences submitted into the public domain by numerous health experts, scientists, doctors, and other relevant individuals and groups. Raising question about the inconsistency of the lockdown, the author wrote:

“Nevertheless, on 23/03/2020, the UK government imposed a voluntary indefinite domestic prison sentence upon the population of Britain, in the name of keeping people safe and protecting the allegedly over-stretched National Heath Service. Two days later, on 25/03/2020, the Coronavirus Act 2020 was rushed through Parliament, on the alleged ground that the country was in grave danger from a viral pandemic, which the government had already reclassified on 19/03/2020, from being considered a serious threat to being no more threatening than a common cold or influenza.”

For a genuine solution to this systematically manufactured problem and for consistent and transparent government actions and policies, efforts like this one are very important and should be supported by the general public. Mass education regarding alternative narratives and facts of the current purported pandemic should be the main concern, for decency and integrity’s sake, not only of government institutions but also of private entities involved in businesses and services. This is obviously way more than plausible but as of now, however, it remains a challenge as the national health department, backed by privately-run World Health Organization (WHO), along with the mainstream media, is blocking these kinds of essential effort and information. In general, there are too little efforts and government policies themselves are some of the contributing factors why this fraud can’t be stopped; bringing more hardships and miseries on to the global scale.

As an example, in the UK alone, the government measures and responses face endless questions and criticisms because of its obtrusive inconsistencies and even frauds. According to the Sovereign Grand Jury:

“This naturally gave rise to questions of such significance to everybody in Britain and the rest of the world, which has almost entirely followed suit. If the UK government knew COVID-19 was not a serious public health risk on 19/03/2020, why did Parliament pass the Coronavirus Bill six days later? Upon the available evidence, the only logical answer is that the bill was passed in order to use a manufactured public health crisis as a mask for a totalitarian power grab, on the basis that the unconstitutional statute and the regulations which arose out of it, purport to place the UK government, the NHS and the councils beyond being held accountable for their actions by the people. Why else would they have used their landslide majority in Parliament to ram through a bill which suspends the legal right to remove the government from office, until they say so? Whilst everybody involved in these critical investigations sincerely wishes it were otherwise, the facts dictate that there is simply no other rational explanation as to why the government is relying upon plainly dishonest statements, which call into question the very legitimacy of this Parliament.”

In the middle of the article, the author then proceeded to lay out the “unconstitutionality” of the UK legislation, citing contexts which are amazingly similar to the regulations of other countries in the US and Asia that are under the treaty or member of the WHO, the United Nations, and various economic, financial, and political treaty being run and funded by the globalist elite:

The Coronavirus Bill (HC Bill 122) was purportedly enacted without the conventional Parliamentary scrutiny and debate, purportedly to keep people safe and free from harm and to save the NHS, during this alleged public health emergency. However, the following powers it purported to authorise under the provisions of the Civil Contingencies Act 2004, represent fundamental breaches of Magna Carta, the Act of Settlement, the Declaration and Bill of Rights, the Petition of Right, the Coronation Oath and the Human Rights Act, which constitutionally forbid the suspension of the unalienable rights and protections guaranteed by the Common Law.

Forced detention and isolation of anyone, including children, and for any amount of time.

Authorities can take biological samples from your body by force [including at the point of a gun].

Your body will then be claimed as the property of the state, to do with as it sees fit and there is no right of appeal.

Nobody’s legal rights are recognised in the as yet unidentified isolation facilities, which are quickly being built around the country.

Emergency powers will last up to 2 years, with reviews every 6 months and the unrestricted option to extend indefinitely.

Lock-down powers have been drafted so that they can be used to prevent mass protests against the totalitarian measures imposed.

State surveillance safeguards have effectively been abolished, authorising total surveillance of every aspect of our lives, in the 5G control grid they are erecting, while everybody else is imprisoned in their homes.

Protections from forced detainment and cruel and unnecessary treatment under the Mental Health Act have been relaxed indefinitely.

Cremations can be enforced against personal and religious wishes.

No inquests into any suspicious deaths will be held until further notice.

No requirement for any medical certification for burials or cremations are now required.

The health service has been indemnified, should they fail for what ever reason to provide care to people who need it, or if they administer forced treatment and the patient dies as a result.

Only one government appointed medical ‘officer’ is required to sign off COMPULSORY TREATMENT ORDERS, which mean you can be forcibly medicated.

Or held down and injected with whatever is seen fit, by whomsoever your caring and compassionate government chooses to answer to nobody but them.

Local Authorities are also now exempt from compliance with their duties under The Care Act 2014, but they are still sending parking bandits to fine you for parking in front of the home you have been imprisoned in.

If someone dies in police custody or any type of custody they can simply dispose of the body without any paperwork, medical exam or certification or inquest.

Any criticism of government policy is a summary public order offence, until they end the state of emergency, liable to fine and imprisonment without trial.

To read the full context, go to these sites: