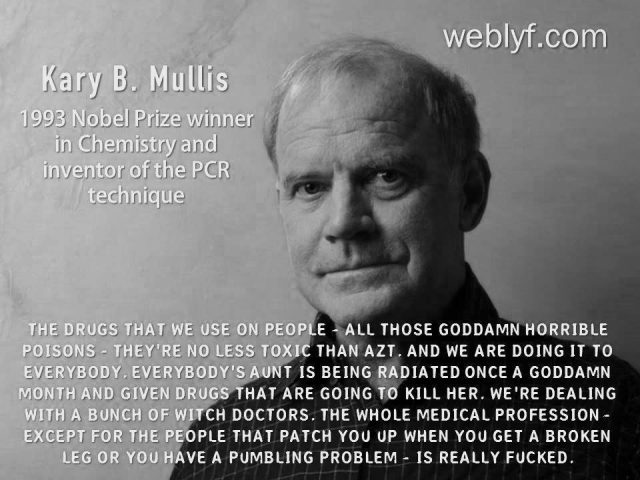 Much like of the current orgiastic hysteria and institutional fiasco related to the COVID19, the HIV-causes-AIDS hypothesis also owes scientifically valid and objective evidence to the world to justify what the AIDS establishment is doing for the last three decades. And much like the coronavirus scam, the HIV-AIDS dogma maintained by the same cancer/disease industry hiding under the guise of public health and treatment, which fundamentally stands on the century old bogus “germ theory”, is also being endlessly questioned and strongly criticized by thousands of experts in the fields of virology, science, and medicine for its inconsistent, constantly changing characteristics and definition. Unfortunately, up until now no one can stop this dangerous hoax from destroying lives across the globe; especially in the unsuspecting developing world even though this claim (that HIV causes AIDS) has never been proven.

One of the most respected scientists who questioned the HIV-AIDS hypothesis even until his death is Dr. Kary Mullis, a biochemist PhD. who won a Nobel Prize for Chemistry in 1993 for inventing the PCR (polymerase chain reaction), the basis for the HIV viral load tests. Mullis died last year and until his end, he stood firm on his disagreement on using his invention to diagnose people of having infected with a “disease-causing-virus” such as HIV, COVID19, etc. As a scientist who worked on the subject matter himself, Mullis has been haunted by endless questions that have never been answered (or can’t be answered) by the very same establishment that perpetuates this dogma. And lastly, much like the coronavirus fraud, this “deadly virus” delusion has been generated by billion-dollar funding coming from same mafia themselves, the biggest pharmaceutical companies that are offering the so-called cure.

Based on his interviews, media appearances, and works in general, you can intuitively sense that Dr. Kary Mullis is a genuine person; he is sincere and compassionate who possesses a profound sense of empathy and regard to human life or value. He is a type of scientist which no one can buy or bribe; having a strong passion for scientific truth, ethics, and integrity, upholding these as the main principles and priority. Along with other experts and health professionals, he spoke strongly against the use of AZT and other kinds of destructive drugs and methods wrongly believed by both the scientific/medical establishment and the general public to be the “solution”.

To learn more about this subject and to understand how Dr. Kary Mullis sees the HIV-AIDS hypothesis and the way the medical establishment maintains its official narrative, here are some quotes from Dr. Mullis himself:

“The HIV-causes-AIDS theory is one hell of a mistake.” – Foreword, “Inventing the AIDS Virus”

“Years from now, people will find our acceptance of the HIV theory of AIDS as silly as we find those who excommunicated Galileo.” – “Dancing Naked in the Mind Field,” 1998

“Where is the research that says HIV is the cause of AIDS? There are 10,000 people in the world now who specialize in HIV. None has any interest in the possibility HIV doesn’t cause AIDS because if it doesn’t, their expertise is useless.”

“People keep asking me, ‘You mean you don’t believe that HIV causes AIDS?’ And I say, ‘Whether I believe it or not is irrelevant! I have no scientific evidence for it.’ I might believe in God, and He could have told me in a dream that HIV causes AIDS. But I wouldn’t stand up in front of scientists and say, ‘I believe HIV causes AIDS because God told me.’ I’d say, ‘I have papers here in hand and experiments that have been done that can be demonstrated to others.’ It’s not what somebody believes, it’s experimental proof that counts. And those guys don’t have that.” – California Monthly, Sept 1994

“If you think a virus is the cause of AIDS, do a control without it. To do a control is the first thing you teach undergraduates. But it hasn’t been done. The epidemiology of AIDS is a pile of anecdotal stories selected to the virus-AIDS hypothesis. People don’t bother to check the details of popular dogma or consensus views.” – HIV not Guilty, Oct 5, 1996

“[Aids] is not ‘God’s wrath’ or any other absurdity. A segment of our society was experimenting with their lifestyle, and it didn’t work. They got sick. Another segment of our pluralistic society, call them doctor/scientist refugees from the failed War on Cancer, or just call them professional jackals, discovered that it did work. It worked for them. They are still making payments on their new BMWs out of your pocket.” – Dancing Naked in the Mind Field. Vintage Books. 2000

“I think it’s simple logic. It doesn’t require that anyone have any specialized knowledge of the field. The fact is that if there were evidence that HIV causes AIDS-if anyone who was in fact a specialist in that area could write a review of the literature, in which a number of scientific studies were cited that either singly or as a group could support the hypothesis that HIV is the probable cause of AIDS-somebody would have written it. There’s no paper, nor is there a review mentioning a number of papers that all taken together would support that statement.”

“Because they’re working in a vacuum of, like, real scientists. There’s very few of what I regard as real scientists who’ve paid any interest at all to this field. The people who were recruited by the so-called war on AIDS were scientists who generally had nothing else better to do. There weren’t a lot of qualified people who were suddenly attracted to the field. There were simply a lot of people who had nothing else to get grants for, and they could get grants real easily for this one; they were by and large people who didn’t know very much about the disease, and didn’t care, but they did know how to deal with HIV. Because HIV was a fairly straightforward kind of thing for molecular biology to approach at the time, and microbiology was getting real easy, because you just buy a bunch of kits from suppliers of scientific stuff, you know, get a couple of technicians, and have them start doing assays that are just cookbook kinds of things.”

To read Kary Mullis’ full interviews/statements/articles, go to these links: