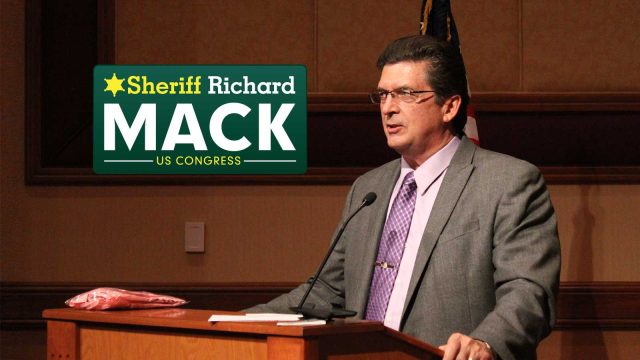 In 2010 during the H1N1 swine flu fake epidemic, the then Sheriff Richard Mack of Graham County, Arizona, also a political activist, discussed the importance of maintaining our liberties during times like these. Here is the clip from his interview at the “Enemy of the State” show:

What has been the mantra of the Obama administration of the Eric Holder Justice Department, it has been, they’ve even said over and over, “Never waste a good crisis”. And so that has me concerned that when (inaudible) brought up the “crisis of the day” that it is a phenomenon that is created by our own government so they can come in with the “solution”. And that’s exactly what happened on the Brege(?) bill, that is exactly what happened on H1N1 flu, the media and all the hype, and all the propaganda gets everybody so scared that they start lining up for vaccinations and anything else that government is going to dish out or shove down our throat so that they can “save us”.

He then proceeds to discuss his distrust in vaccines and his refusal to the mandatory vaccination policy:

I haven’t had a flu shot in my life, and certainly didn’t line up to go get the H1N1 flu shot. No one in my family got it, none of us got the injection and certainly I just don’t trust government to tell me what I should do when it comes to my own health. You know, I’m not a scientist, I’m not a doctor, I don’t know if the H1N1 vaccine was safe or not but I certainly talked to people who said that it was not; people I trust. And so did I investigated enough personally to where I can really say one way of the other? No. But did I talk to some people I totally believe in, who said it wasn’t safe? Yeah.

Cops participating in the police state by forcibly taking people down who are suspected of drunk driving or DUI and forcing them to give their blood is absolutely an abomination. These are people, these are public officials, these are peace officers who have raised their right arm and swore an oath to uphold and defend the United State constitution. Now listen, I was a city cop for eleven years, I was a sheriff for eight years, I would have never allowed such, never allowed our deputies to do that sort of thing or any other officer. The nearly 20 years that I spent in law enforcement, we were told and we were taught that if a citizen who is perhaps under arrest for DUI, if they refuse to take a breathalyzer test or any other test that the officer required, they can refuse and then it’s an automatic suspension of their license. OK, that’s the repercussion.

Meanwhile, he then reminded the law enforcers about the dangers of not questioning orders and blindly supporting tyrannical laws, comparing the mandatory vaccination law to the Gestapo Nazis during Hitler’s time:

Are we not sensitive enough, are we not intelligent enough to really see and understand when we’ve gone too far? Where doing things now that we used to read about in history books that made us shudder to think that Hitler could do such a thing or that the Gestapo could do this sort of thing. And now we are embracing these things as a matter of routine in the United States of America where people are supposed to be left alone and they’re supposed to be in-charge of their own lives? I cannot really believe that we do that sort of thing here.

Of course if the police can forcibly take your blood, you would think that it would fall into line with that sort of thinking that they could certainly force something into you, force vaccination or whatever. But again I just can’t believe that our police could allow themselves to be used like this and not understand their duty and the responsibility to keep their oath of office and to protect people from these types of Gestapo tactics, I really can’t believe but I know it happens.

I will admit I said something radical and it is this:

“The greatest threat to our God-given American liberty is our own federal government.”

I’m not pleased to say that, I’m not happy to say it, I don’t like to say it, I wish it was not true but it is true. James Madison said that “we will lose more freedom of the people by gradual and silent encroachments from those in power than by violent and sudden attacks from foreign enemies. And that’s the same thing; he’s saying the same thing. He is saying that the true enemy of freedom has always been, in world history, government. And in our current history, if we’re not learning the history lesson of the Obama administration that they are indeed, the “enemy of the state”. They are doing everything and forcing us to participate in this socialistic, communistic agenda that this communist president (Obama) has been attempting to shove down our throats, ever since he’s been in office. What probably concerns me more than Obama and Holder and all the Czars he has put in America and in his administration is that the millions of people in America, who seem to support him blindly. That’s what scares me the most.

What’s the difference between Bush and Obama: every wrong thing that Bush was doing, Obama has taken it to the tenth power and has accelerated it and made it worst. Was Bush a socialist? Absolutely! Was Bush a good president? Absolutely not. Did he do things contrary to the constitution? Absolutely. Did he get us involved in foreign was that we should not be involved in? Yes. Was he willing to compromise our freedom and security and safety for his own political “paddy-caking”? Yes. And he refused to protect the borders, he refused to secure the borders and yet he is totally willing to sacrifice the lives of our young people in Iraq and Afghanistan for his own political game. You cannot pretend that we have a war on terror and not secure our borders.

The greatest thing that your sheriff can do to you is to protect you from tyranny and out of controlled government. A lot of people in the sheriff offices in this country do not know the constitution, they don’t know American history. Some of them do, I understand that.

To listen to the full video clip, go to this link: