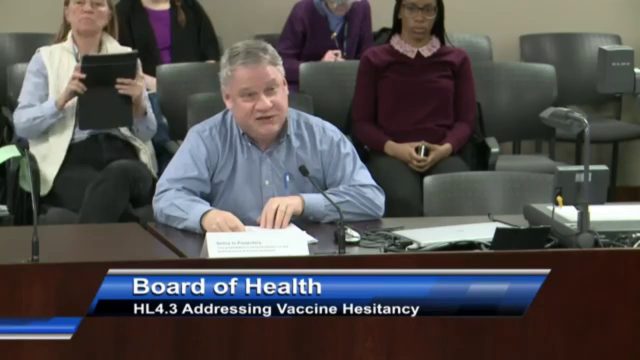 On April 8 of last year, Joel Sussmann addressed some very important points about vaccination to the Toronto Board of Health. It is very important for all the citizens of the world, not only of Canada, to hear his words so that people should realize that governments have no reason and power to make vaccinations mandatory, especially when something they are mandating poses serious threats like injury and death such as these.

In his speech, he first presented these facts:

From 2004 to 2014 zero people in the US died from contracting measles according to the CDC. Meanwhile, during the same time, a hundred people died from the Measles, Mumps, and Rubella (MMR) vaccine according to the Vaccine Adverse Events Reporting System (VAERS).

A 2011 study conducted by the Ottawa Hospital Research Institute found that 1 in 168 babies had emergency room visits within 4 to 12 days after their 12-month MMR vaccination and that several children died during the study and that the number of deaths was not disclosed.

“1 in 168 is a lot higher than the 1 in a million vaccine injury risk that parents are told about. Isn’t it?”

The CDC holds 50 patents of vaccines and sells 5 billion dollars a year worth of vaccines.

Merck’s package insert on the MMR list death as only one of dozens of possible side effects.

The US Congress has ruled that vaccines are unavoidably unsafe.

Harvard Pilgrim Hospital Study funded by Health and Human Services (HHS) in the US revealed that only 1% of vaccine injuries are reported. This means that more than 99% of vaccine adverse reactions are not reported or acknowledge.

The US Vaccine Injury Compensation Program has paid out more than 4 billion dollars due to vaccine injury and death.

Canada is the only G7 nation without a vaccine injury compensation program.

The CDC uses Institute of Medicine (IOM) reports to support their claim that vaccines do not cause autism. IoM’s report on autism concludes, “The evidence is inadequate to accept or reject a causal relationship between DTAP containing vaccines in autism”.

He again asked a question:

IoM 2011 safety’s report: Varicella, Tetanus, Hepatitis B and MMR vaccines – 155 health conditions were studied in 134 cases out of 155, the literature was “inadequate to accept or reject causation”. Is this sound like the science is settled to you?

And then he proceeded to emphasize:

If you are not aware of these facts then you have no business imposing this poorly tested medical procedure on Ontario’s children. And if you are aware, then you are participating in medical and scientific fraud. The vast majority of parents of vaccine injured or killed children now know the truth; they know the science is inadequate to support claims that vaccines are safe. You will not silence these parents through censorship, shaming, mandates and manipulation. Until Health Canada authorizes an independent long-term study of vaccinated versus unvaccinated, you’re wasting everyone’s time. No amount of pressure from Health Canada, Public Health (inaudible) or the corporate controlled media will ever convince us otherwise. Our trust has been broken.

In a 2018 Globe & Mail opinion piece, Neil Rau & Richard Chavez said this: “The borderline hysteria, fuelled by the media and public health that greets a few cases of measles is unwarranted.” Mr. Rau is a respected immunologist on the staff of University of Toronto. Dr. Chavez recently held the post of Chief Medical Officer of Health for Ontario.

Congress was blackmailed into drafting the NCVIA (National Childhood Vaccine Injury Act) in 1986. Vaccine manufacturer were losing multiple big money lawsuits surrounding injury and death of their products. They demanded congress pass the law that give them legal immunity. In doing so, congress said you must do safety studies annually and you must report to congress every two years. In the 2018 law suit, it was proven that HHS did neither of those things; no studies and no report to congress for 30 years.

He then closed his speech with these words:

Your “science is settled” “one-size-fits-all” agenda is tight and intended to lead all citizens down the path of compulsory vaccination. It’s a direct violation of the Ontario Healthcare Consent Act, the Universal Declaration of Bioethics and Human Rights, the Nuremberg Code, and the Charter of Rights and Freedoms of the Canadian Constitution as supported by our Health Canada statement. This is Canada, it is not Salem, Massachusetts 1692. This is not Berlin 1939. This will not stand.

To learn more about vaccination in Canada, please visit this site: