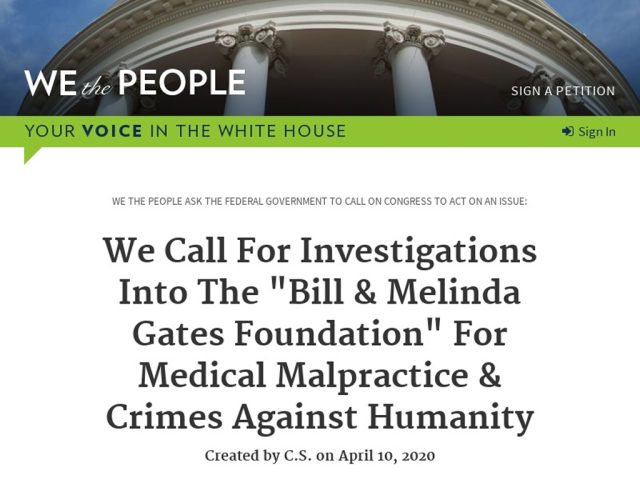 There is a petition against Bill Gates asking for U.S Congress to investigate about his foundation, the Bill and Melinda Gates foundation, involvements on crimes related to “medical malpractice” in developing countries such as India and Africa.

“WE THE PEOPLE ASK THE FEDERAL GOVERNMENT TO CALL ON CONGRESS TO ACT ON AN ISSUE: We Call For Investigations Into The “Bill & Melinda Gates Foundation” For Medical Malpractice & Crimes Against Humanity”

The petition, which was created last April 10, 2020, urges the federal government to take action and call on Congress for an investigation into Gates’ foundation for “Medical Malpractice and Crimes against Humanity”. Petitions.whitehouse.gov (See full link below)

The petition which was filed at “We the People” (petitions.whitehouse.gov) website, has gained 336,078 signatures, surpassing the 100,000 goal set by its creator named C.S. The petition has stated this on the platform:

“As we look at events surrounding the “COVID-19 pandemic,” various questions remain unanswered. On Oct. 18th of 2019, only weeks prior to ground zero being declared in Wuhan, China, two major events took place. One is “Event 201,” the other is the “Military World Games,” held in none other than Wuhan. Since then a worldwide push for vaccines & biometric tracking has been initiated.

At the forefront of this is Bill Gates, who has publicly stated his interest in “reducing population growth” by 10-15%, by means of vaccination. Gates, UNICEF & WHO (World Health Organization) have already been credibly accused of intentionally sterilizing Kenyan children through the use of a hidden HCG antigen in tetanus vaccines. Congress & all other governing bodies are derelict in duty until a thorough and public inquiry is complete.”

“Vaccines, for Bill Gates, are a strategic philanthropy that feed his many vaccine-related businesses (including Microsoft’s ambition to control a global vac ID enterprise) and give him dictatorial control over global health policy—the spear tip of corporate neo-imperialism,”

“Gates’ obsession with vaccines seems fueled by a messianic conviction that he is ordained to save the world with technology and a god-like willingness to experiment with the lives of lesser humans.”

In addition to these attacks, Bill Gates is also now being the favorite subject of many discussions on social media and other platforms such as YouTube, Facebook and Twitter, accusing him of being a “heartless advocate for eugenics and population control”. Because of his talks and interviews, the people’s growing suspicion is becoming compelling to many. Yet, what appalls many is that it seems he’d become a voice that most governments around the world follow. It is widely known and documented that his foundation has poured a very significant amount of money to various health institutions around the world, providing vaccines for inoculation, which many claim “useless and based on fraud and corrupt science”.

Just a week ago, he criticized President Donald Trump, although without mentioning the name, for the president’s decision to cut funding to the WHO. Bill Gates has become more controversial due to his appearances in many internet platforms and TV shows talking about what should be the government’s course and decisions with regards to the coronavirus so-called pandemic. Many of these claims against him are also telling very dark tales about his relation to the policies involving mass immunization of the 3rd world which has been “linked” not only to serious injuries but also death, especially to children.

Bill Gates, who is using his millions, if not billions, of dollars for “helping to fight” the COVID-19 crisis, was also heavily criticized by many experts and government officials for saying that “things can never go back to normal until mass vaccination and testing are being implemented” as “these are the only options to solve the spread of the disease”. However, many do not agree not only on his proposed solution but also on the said “legitimacy” of the coronavirus’ “official narrative”. Together with Anthony Fauci, director of the National Institute of Allergy and Infectious Diseases, NIAID, Bill Gates is now gaining “resentful attention” from many critics, even blamed them both for “the shuttering of businesses; shutting up of citizens in their homes; shutting down of schools around the nation; stalling of the national economy; and of late, shaping of messaging that’s led to thousands of Americans wearing stupid face masks everywhere they go”.