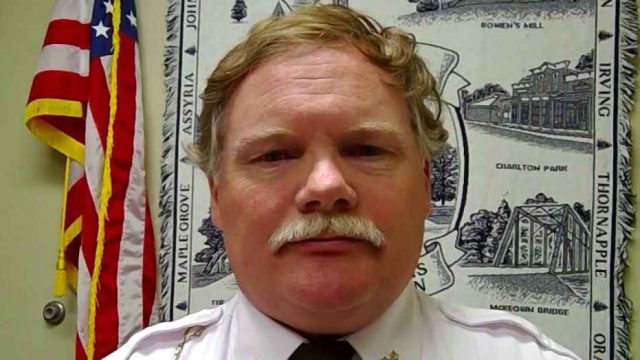 A group of county sheriffs in Michigan were questioning the governor’s policy and sworn to handle the situation with compassion to people and “common sense”. In a press release, Leelanau County Sheriff Mike Borkovich, Manistee County Sheriff Ken Falk, Benzie County Sheriff Ted Schendel, and Mason County Sheriff Kim Cole expressed what they think about how they should implement the policy:

“While we understand her desire to protect the public, we question some restrictions that she has imposed as overstepping her executive authority.”

“We’re not saying we’re not going to listen to Governor Whitmer. We’re going to use common sense when it comes to enforcing it. When people are being respectful and using that ‘six-foot range’ (social distancing protocol), we’re not going out and tell the people to go home. We don’t want them (the people) bottled up inside the house where they start arguing and start drinking alcohol. I think that’s reasonable. I want everybody to respect the health workers and all that. If you can stay at home, stay at home. But if you need to get out, walk out, we’re not going to bother you on that.”

“Officers across the country have always had discretion on how to enforce the law. The law the Governor is using to do her executive orders states that the orders have to be reasonable. Reasonable in Detroit might be different than reasonable in Delton. That’s where “discretion” comes in. We are here to work with our community, not work them over.”

“In 1996 the U.S. Supreme Court ruled in the Sheriff Mack/Sheriff Printz v The United States case with Justice Scalia writing the opinion “But the Constitution protects us from our own best intentions. It divides power among sovereigns and among branches of government precisely so that we may resist the temptation to concentrate power in one location as an expedient solution to the crisis of the day.” WOW, so the Constitution comes first… Of course it does..!”

And on the last part of this post, he wrote:

“I am asking my Deputies and every Officer out there to use their discretion on orders, and especially orders that are vague or inconsistent. We allow discretion even when the law is clear. For Example: If you are out there having a party Officers will probably shut you down. If you are out walking your dog you probably won’t be bothered. I can’t speak for every agency, however, the Officers, Firemen, EMS, Hospital Staff really are trying to keep their distance from you too.

We have a great group of people from 911 to all of the other responders out there who are asked to do something that they have never dealt with before. Keep all of them in your thoughts and prayers.”