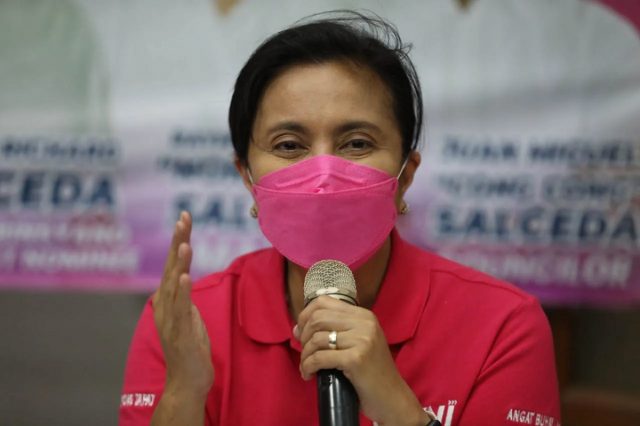 Referring to the “Len-Len” series of the camp of her rival former Senator Ferdinand Marcos Jr., presidential aspirant Vice President Leni Robredo promised this Sunday, Feb. 13, to supporters that she is willing to work “more than 18 hours” every day.

Despite the long battle, the Vice President told thousands of supporters at the Quezon Memorial Circle that their “love” gives her the strength to wake up every day and work.

“Para po sa inyo talaga sinisipigan namin. Alam po natin na marami tayong kailangang trabahuhin, pero ‘yung binibigay nyong pagmamahal, iyon yung nagbibigay sa amin ng lakas, araw-araw, gigising ng maaga more than 18 hours kami magtatrabaho, [For you, we really work hard. We know that we have a lot to work on, but ‘the love you give, that’s what gives us strength, every day, we wake up early more than 18 hours we will work,]” said Robredo to her supporters.

The presidential candidate refers to a skit released by Senator Imee Marcos that mocked a “Len-Len” for working 18 hours a day.

This seems to be in reference to Robredo who told veteran journalist Jessica Soho in an earlier interview that she works nearly 18 hours a day and sleeps only six hours.

But supporters of the Vice President immediately defended themselves and made #AkoSiLenLen Twitter’s top trending topic on Friday, Feb. 11.

Robredo said her camp lacks resources, machinery, and political capital, but she and her running mate Senator Kiko Pangilinan believe they need to continue the fight because only a “clean and honest” government can help people.

“Masasagot lang po ang mga pangangailangan pag katuwang ng gobyerno ang ordinaryong mamamayan. ‘Yan po ‘yung klaseng pamahalaan na pinapangako namin sa inyo. Sisiguraduhin namin na magiging malinis, matapat, mahusay kami para walang naiiwan sa laylayan, [The needs can only be met if the government cooperates with the ordinary people. That is the kind of government we promise you. We will make sure that we are clean, honest, we are good so that nothing is left behind,]” Robredo added.

Unlike before when she ran in the 2016 vice presidential elections, Robredo said she now has a “receipt” to prove what she can do despite the meager budget and lack of a mandate.

“Yung mga nakakakilala po sa’kin, alam na ako ‘yung tipong lider na hindi lang nagbabasa ng report ng aking mga staff, pero ako mismo ‘yung bumababa. Ako mismo ‘yung nakikiusap. Ako mismo ‘yung nakikinig dahil ‘yun lang ‘yung paraan para maramdaman natin ‘yun kahirapan na pinagdadaanan nila, [Those who know me, know that I am the type of leader who not only reads the report of my staff, but I myself am the one who goes down. I’m the one begging. “I myself am the one who listens because that is the only way for us to feel the difficulties they are going through,” she shared.

VP Robredo asked the people to support not only her but also Pangilinan and their senatorial ticket.