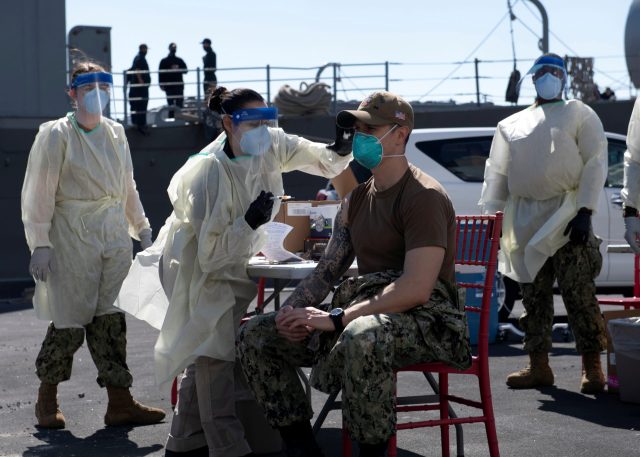 The US Navy has recently announced this month that it has discharged 45 servicemen for refusing to get the COVID shot, including those who decline for religious reasons. Of these, 23 were active duty members. Currently, there are 3,258 active duty servicemen who are unvaccinated and so far, there are 776 Ready Reserve members who refused the jab due to religious reasons, particularly due to their anti-abortion stance. However, until now the US Navy has not approved any single religious exemption request.

“Exemptions for other reasons have also received scant attention, with just 10 permanent medical exemptions, 259 temporary medical exemptions, and 59 administrative exemptions receiving approval for active duty members. While defenders of the injection mandates have been quick to point out that the military has long required soldiers to be immunized against a range of diseases, the fact remains that previous injections were subjected to extensive evaluation and development time before being put into widespread use, while the COVID shots were rushed through accelerated clinical trials.”

The US Navy is not the only department in the armed forces that dared to remove soldiers who refused the injection. In late December of last year, the US Air Force has boldly announced that it had discharged “27 members” after declining to get the inoculation. And in the 21st of January 2022, LSN reported that the number had reached 111 active duty Air Force members. According to the reports as also, the Navy and the Air Force have “not approved a single religious accommodation request.”

Meanwhile, the Marine Corps has also disclosed that they have, so far, discharged 334 Marines for refusing to take the vaccine. The only one not announcing any removal of servicemen is the US Army, despite the fact that its deadline for vaccination was on December 15.  All of this madness started during September of last year, as 200,000 servicemen who are refusing to get the shots were denied Temporary Restraining Order by their commanders or superiors.

In August of last year, a Navy physician practicing Orthopaedic and Spinal Surgery since 1995, who is also trained in bioweapons, also publicly exposed another suppressed COVID vaccine data. Dr. Lee Merritt, also a past president of the Association of American Physicians and Surgeons, reported that in 2020, there were only “20 deaths among all active duty military personnel related to COVID” but “there are now many reports of tumors and over 80 cases of myocarditis (inflammation of the heart), which has a 5-year mortality rate of around 66%, following the COVID-19 shots given to the military”.

It is not surprising why many military servicemen and women refuse to take the vaccine. Aside from the still lingering cry of the soldiers who are victims of vaccine harm in the past, many tragic vaccine adverse events were also reported during the recent year, particularly since the start of the COVID jab roll-out. In September of 2021 also, Health Impact News (HIN) published a report regarding claims of vaccine adverse events, injuries and deaths, from several military families, ranging “from members in the earlier phases of their careers, to those retired”. One lady developed blood clots in her lungs after her shot which left her needing emergency surgery. She was placed in ICU, with one of her legs severely affected by the clots for several hours. As the report from HIN runs:

“Brooke has undergone seven surgeries since January and has at least one or two more to go. She will be on blood thinners for the rest of her life. According to Brooke’s mother, Brooke’s military career is over. 2021 has been quite a setback for this once healthy 23 year old woman.

Brooke is an active duty military member who almost lost her life and her leg after her Pfizer shot, according to her parents. Her mother Rachel Gronbach and father Greg Gronbach have both posted on social media in regards to their daughter’s experience, and it sounds pretty traumatic. Brooke’s experience with her Pfizer shot, has changed the course of her life.”

Meanwhile, another military serviceman who was also victimized by COVID vaccine was a veteran named Christopher Shepherd. He was reported to have been so severely damaged that he can no longer go to work “because his heart has been damaged”. This is the reason why his wife, Jennifer Shepherd, started a gofundme fundraiser to raise money. In addition, a man named DJ Boyer was also reported to have developed a heart problem after taking the Johnson & Johnson shot. And lastly, HIN also reported another two veterans who died after taking the jab. Their names are Tony Stewart Jr., who died after his second dose, and Kyle McFarland, who also passed away at home.