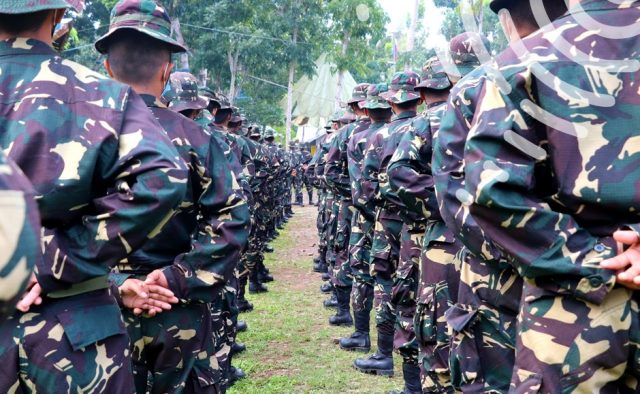 Manila, Philippines – The Department of Justice (DOJ) has started its preliminary investigation last January 20 on the charges of “kidnapping, serious illegal detention, rape, violence against women and children, and child abuse” filed by a 15-year-old girl, a daughter of farmers in Quezon Province, against Leoven Julita, a member of Citizen Armed Force Geographical Unit (CAFGU).

Belle (not her real name), a minor, testified that she was kidnapped on July 27, 2020, by the “elements of the 59th Infantry Brigade of the Philippine Army (IBPA)”, using a white van. She was then detained illegally from July 27 to August 13, 2020. According to a report by MSN:

“In a press conference Friday (Jan 21), the family of the victim stated that they filed charges of kidnapping and serious illegal detention with rape, violence against women and children, and child abuse against Leoven Julita, a Citizen Armed Force Geographical Unit (CAFGU) member, who raped the minor multiple times.

Meanwhile, Sinag, which is the “Official Student Publication of the College of Social Sciences and Philosophy of UP Diliman, also reported:

“In a press conference held by Gabriela Southern Tagalog on January 21, Friday, Belle said that she was abducted last July 27, 2020, by elements of the 59th Infantry Brigade of the Philippine Army (IBPA) at Barangay Binahaan, Pagbilao, Quezon, and was taken in a white van.

Belle reported Julita, 19 at the time of the abduction, was with a certain Arnil Abrinillo. Aside from “paulit-ulit na panggagahasa,” Belle shared that she was also illegally detained in a police officer’s house and subjected to interrogation about alleged “rebel activities” in her community, red-tagging, and threats by soldiers and CAFGU members.

She and her family were also reported to have been coerced by seven armed soldiers into confessing as rebel insurgents. Belle also experienced beating with the use of scissors before she was turned over to Department of Social Welfare and Development (DSWD).”

Quezon region is a hotspot for armed conflict between the NPA (new people’s army) rebels and the government troops. In March last year, UNTV reported about five rebels who surrendered to the AFP and PNP in Polilio. The said five suspects were caught with firearms and ammunition in Barangay Salipsip, Polilio Quezon. Communist rebels who surrender to the government receive Php 700,000, including medical check-ups. UNTV also wrote on their website:

“…alias Gio and alias Patrick who were members of the New People’s Army (NPA), surrendered to the government forces on March 25 in Barangay Salipsip, Polilio, Quezon. They also turned in their firearms and ammunitions.

Another member of the NPA, identified as alias JM, also yielded in Sta Maria, Laguna on the same day. Meanwhile, alias Dexter and alias Joan, also remnants of NPA group in the boundaries of Rizal and Laguna, voluntarily surrendered to the AFP-PNP. Alias JM, in an interview, said that the hardships they endured as rebels and the complete disregard for their welfare pushed them to abandon the armed struggle.”

In September 2021 also, Philippine News Agency (PNA) reported that there were explosives and ammunition cache seized by government troops in Sitio Madaraki, General Nakar town, Quezon province. According to the PNA report:

“In a news release, the 202nd Infantry Unifier Brigade here said the cache included 20 anti-personnel mines, 15 anti-vehicle mines, and 340 rounds of caliber .30 ammunition, which are used by the NPA to kill or maim government troops but eventually harm innocent civilians in violation of the International Humanitarian Law on the use of landmines.”

Meanwhile, the 15-year-old Belle also testified that she “was detained in a small room in the camp and experienced interrogation, red-tagging, and threats by soldiers and members of CAFGU”; and claimed that her family receives death threats on their Facebook messenger. These accounts, though, are anonymous. The harassment, according to the victim, continued for a while.