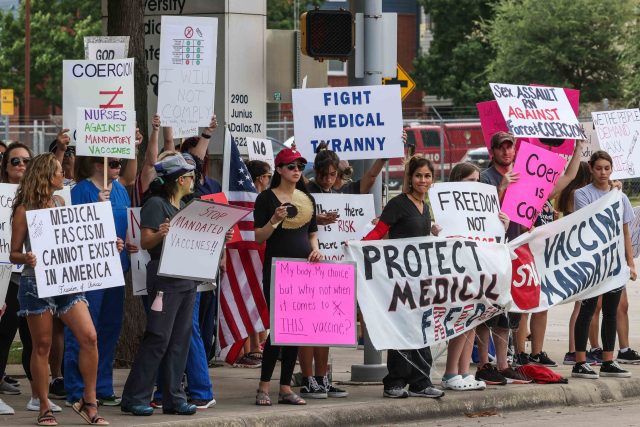 On August, more than a dozen workers from St. Elizabeth Healthcare in Cincinnati united to join the legal fight against UC Health, Cincinnati Children’s, Christ, TriHealth, Mercy and St. Elizabeth. According to reports, the workers who agreed to be plaintiffs wanted both courts of Hamilton and Boone counties to declare that the vaccine mandates to health workers violate their rights “to protect their bodily integrity and to refuse unnecessary medical treatment”.

In the lawsuits, workers composed of nurses, floor managers, supervisors, health care technicians, and even security guards have stated:

“When there was no vaccine, the workers had to go to work. They were heroes. Now that there is a vaccine, they have to get the vaccine or be fired. They are ‘zeroes’…”

It also accuses them of “engaging in a pattern of corrupt activity” by intentionally reporting “falsified data regarding COVID-19, including number of patients, deaths of patients, adverse effects of vaccines and other medical treatments and did so with the intent to deceive the public and to maintain a federal revenue stream from the United States and Ohio governments and its agencies. False reporting includes under reporting, minimizing and mischaracterizing data.”

In Utica, NY, Judge David Hurd issued the order after another 17 health professionals, including doctors and nurses, also filed a lawsuit against vaccine mandates, claiming that their constitutional rights were violated. The federal judge therefore temporarily blocked the New York State’s mandate, saying:

The medical workers, however, choose to proceed anonymously with the lawsuit for avoiding the “risk of ostracization, threats of harm, immediate firing, and other retaliatory consequences if their names become known”. These plaintiffs, who include nuclear medicine technologist, cognitive rehabilitation therapist, doctors, and nurses, are not opposed to all vaccines but they are all Christians that’s why they have a common reason for opposing the COVID jab, the use of aborted fetal tissues.

Meanwhile, in the state of New Mexico, another two healthcare workers filed a lawsuit against the government’s vaccine mandates. The plaintiffs are Jennifer Blackford from Bernalillo County, a registered nurse at Presbyterian Hospital in Albuquerque, and Talisha Valdez, the Union County Extension Agent. Blackford claimed that she is refusing the vaccine for the reason that it is still under Emergency Use Authorization (EUA) status and not yet fully approved by the U.S. Food and Drug Administration (FDA).

All of these lawsuits came as a response to the rigid and harsh government mandates on vaccines; vaccines that most politicians and policymakers do not really know about. Of course, how can they know? Most of the leaders around the world just blindly follow our health institutions when it comes to this global medical crisis; they did not even bother to ask questions and demand for a piece of evidence about the so-called pathogenic virus before locking down its citizens and shutting down the economy. What a great tragedy. Is it because most leaders have already been corrupted or is it because these health institutions are so financially and politically powerful? What do you think?