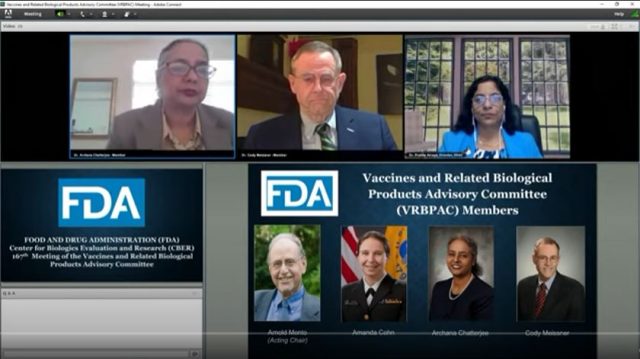 Instead of letting the public know about the well-documented reports on adverse reactions from the COVID shots, major health authorities and the mainstream media, heavily funded and controlled by the globalist elites and their big pharma tentacles, have used these data for promoting “booster shots” for those who have already taken the jab. According to the Centers for Disease Control and Prevention (CDC), “booster dose is a dose of vaccine administered when the initial sufficient immune response to a primary vaccine series is likely to have waned over time”.

So, are we not being deceived again by these agencies and institutions? Are they saying additional doses are now being promoted because the effectiveness of the original vaccine has quickly faded over a short period of time? As reported by Fox News:

“…concerns were raised over the potential increased risk of myocarditis. The FDA panel’s review included Pfizer’s trial results with some 300 participants ages 18-55 who received a booster dose about six months after the second dose.”

Meanwhile on September 17, 2021, a Food and Drug Administration (FDA) panel conducted a virtual hearing entitled “Vaccines and Related Biological Products Advisory Committee”. In this hearing, the participants discussed about data regarding vaccine shots. At the meeting, this FDA advisory panel “declined to endorse authorization the Pfizer-BioNTech Covid booster shot for people aged 16 or older”. This is also after discovering that 1 in 1,000 individuals who took the Pfizer COVID shots are affected by myocarditis. This study published in medRxiv.org, conducted by the team of researchers from Maccabi Healthcare and Tel Aviv University on 800,000 individuals in Israel, has shown that “people who have taken both doses of the Pfizer have a greater risk for hospitalizations”. As Jim Hoft of the Gateway Pundit reported:

“The panel voted 16-2 to reject extra doses of an experimental vaccine, citing insufficient data from incomplete clinical trials and the potential risk of heart inflammation – especially among young men. The FDA hearing prior to the decision was stunning. The hearing was 8 hours long and it included SHOCKING testimony from American doctors.”

On the other hand, Steve Kirsch, the Executive Director of the COVID-19 Early Treatment Fund, also testified to this FDA hearing. He argued that COVID vaccines “killed more people than saved lives” as he pointed out that “patients were 71 times more likely to suffer a heart attack after taking the vaccine than those taking other vaccines. 20 died from the drug, 14 from the placebo”. As the Gateway Pundit also reported:

“Steve Kirsch also pointed out that early treatments are more successful than boosters, noting that cases in Israel are at an all-time high and cases in Uttar Pradesh, India where they administer Ivermectin, the cases are nearly non-existent today.”

In addition, another testimony was also given by Dr. Joseph Fraiman, MD. In his testament, he told the FDA that “government does not have data to show the vaccine was more beneficial than it is harmful for teenage boys”. Regarding vaccine hesitancy, Dr. Fraiman told the FDA panel:

“The vaccine hesitant I’ve met in the ER are more aware of the vaccine studies and more aware of their own COVID risks than the doctors do. For example, many of my nurses refuse the COVID vaccine despite seeing more COVID deaths and devastation than most people have.”

To watch the whole FDA hearing, go to this link: