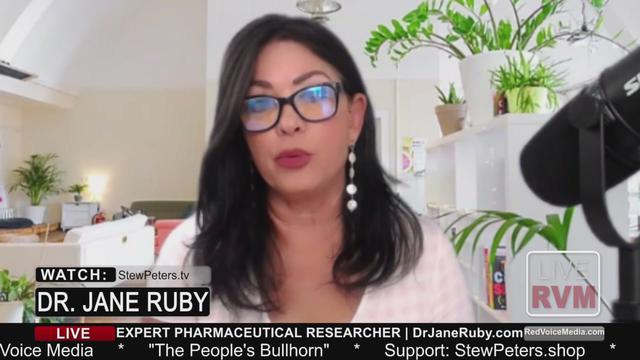 The radio and online TV Show host and associate producer of newly released movie entitled “Hoaxed: The Media’s War on Truth”, also the author of book “A Sea of New Media”, Dr. Jane Ruby, has appeared in Stew Peters Show on August 6 announcing the overall result of many FOI (freedom of information) requests from various experts, scientists, and doctors which confirms that government health agencies do not possess the scientific paper for the so-called SARS-CoV2. So if that doesn’t exist in the government database, what about the scientific data that can show and prove the alleged infection in thousands of deaths claimed to be caused by Covid19? These are very essential documents that can justify all coronavirus mandates and ordinances that the governments are aggressively and sometimes brutally implementing yet they do not hold such thing?

“According to a lot of government admission across the globe, there is no virus other than a digital, theoretical abstraction made in a computer from a genomic database. The virus, as we’ve been saying, has never been isolated, purified, sequenced, characterized, or proven to exist.”

This is not a surprise to those who’ve been keenly following the narrative. The Centers for Disease Control and Prevention (CDC) have already admitted this more than a year ago in their paper entitled “2019-Novel Coronavirus (2019-nCoV) Real-Time RT-PCR Diagnostic panel” published last July 13, 2020, the CDC wrote for the record:

“The analytical sensitivity of the rRT-PCR assays contained in the CDC 2019 Novel Coronavirus (2019-nCoV) Real-Time RT-PCR Diagnostic Panel were determined in Limit of Detection studies. Since no quantified virus isolates of the 2019-nCoV were available for CDC use at the time the test was developed and this study conducted, assays designed for detection of the 2019-nCoV RNA were tested with characterized stocks of in vitro transcribed full length RNA (N gene; GenBank accession: MN908947.2) of known titer (RNA copies/µL) spiked into a diluent consisting of a suspension of human A549 cells and viral transport medium (VTM) to mimic clinical specimen.”

In addition to that, the German virologist and molecular biologist Dr. Stefan Lanka also revealed this long before the Covid scamdemic happened. In a translated German text, Dr. Lanka stated in an interview:

“For almost one year we have been asking authorities, politicians and medical institutes for the scientific evidence for the existence of such viruses that are said to cause disease and therefore require “immunization”. After almost one year we have not received even one concrete answer which provides evidence for the existence of those “vaccine-preventable viruses”. The conclusion is inevitable that our children are still vaccinated on the basis of scientific standards of the 18th and 19th century.”

Meanwhile, on the said interview, Dr. Jane Ruby elaborately explained the most important experimental processes on how scientists should determine a so-called pathological agent, in which the now clearly theoretical SARS-CoV2 has never passed:

“So we look to pre-existing standards, one of which is the Koch’s Postulates. Four things are required before you know you have a virus. First thing is that the micro-organism should be identified and people who are infected with illness should not be identified in people that don’t have symptoms of the illness. The second postulate is that it has to be isolated from a deceased individual and then be able to multiply it in culture, to show its replicability. The third part of Koch’s postulate includes that when you introduce the organism that you’ve isolated, into a healthy person, then that isolate must cause disease. Otherwise, it’s inoculated. The fourth part of Koch’s postulate is the microorganism must then be re-isolated from the experimental host and found to be identical to the original microorganism. These are important because this has never been done.”