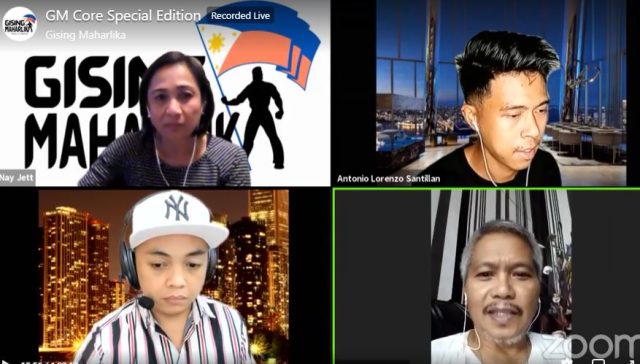 A loose group composed of ordinary citizens and professionals named Gising Maharlika is calling for the Philippine government to “respect the decision” of the country’s military and police personnel who do not want to get the Covid vaccine. According to one of its representatives named Capt. Rey Valeros, it is a common knowledge nowadays in the Philippines that the military and the police personnel aren’t happy anymore on what’s happening. In one of their social media podcasts, he stated that these soldiers and policemen do not want the vaccine. However, they are being pressured to get the jab, according to Capt. Rey. These Filipino police and military, he added, are aware that there have been so many reports of death and injury from this vaccine; the reason why sometimes they come up with different alibis just to avoid the inoculation. To the health authorities, he appealed:

“Please respect our police personnel who do not want to get the shot, it’s our human rights. Do not coerce them. Did you know that some of them have already thought of getting AWOL? You can investigate this matter, by the way. Please don’t force them. And on the side of our military, it’s the same situation. We hope that you all wake up to the truth, this is not a joke. You are violating the rights of our military and police. We as an ordinary citizens are weary and we will support them, one way or another, just like how they support the public in expressing their opinions.”

On one of their social media pages, Gising Maharlika wrote:

“Gising Maharlika is not an organization and/or a political party. We are a non-political, non-partisan group. We act as an independent news and media alternative, bringing truth and only truth to the Filipino people…”

What the Philippine government fails to acknowledge, according to Gising Maharlika, is that not all citizens have been given financial support. That should be obvious because It’s not a secret that there are so many “bad apples” in Philippine politics, from the local government units (LGU) down to the barangay level, those who act and think as if corruption is a perfectly normal part of their job. And because of this incredible notion, aside from the fact that most people avoid inconvenience and conflict, many Filipino people either stay silent or tolerate their local officials and everyone in the so-called authority. Therefore the abuse of power and resources continues; leaving many “powerless” and poor people behind, hungry and depressed. Unfortunately, the corruption in the hospitals and other health agencies still continues as much as how the corruption in government offices continues to happen.

Meanwhile, in addressing the government’s obvious total obedience to the globalist elites and the World Health Organization (WHO) and its insincerity to the current situation of the country, where majority of the Filipinos have lost their jobs, the former UP Manila College of Medicine professor Romeo F. Quijano has stated:

“In their futile attempts to justify their irrational and anti-people behaviour, government health officials and their “experts” seem to forget that common sense is more important than technocratic directives, clinical trials, bureaucratic procedures, laws, rules and regulations. The Covid-19 spectre, vaccine mania, deceptive remedial schemes and brutal, anti-people pandemic responses created by militarism and big money have shoved by the wayside pro-people, more sensible and a wider range of prevention and treatment strategies to address the pandemic. For people with independent minds and awakened consciousness, it is a mere matter of common sense to recognize that most governments, international bodies, academic and science institutions, mainstream medical doctors and mainstream media are under the effective control of Big Pharma and the global moneyed elite.”

Capt. Rey Valeros asked for the public to support Gising Maharlika on their fight against this medical scam, especially to those who’ve been directly affected and victimized by the government’s “tyrannical and atrocious” policies. He decried the Department of Health’s (DOH) “baseless and unscientific” protocols and its lack of public and professional consultation with regards to their decisions and the mandates that are being ordered. Capt. Rey continued:

“The DOH and IATF should first consult the public, the business owners, and listen to all affected parties, especially to those who are in the “lower” clusters of our society, to the common day labourers and construction workers. Some of them come from Cavite and work in Manila. Now that the lockdown is being enforced, how are they going to have their food?”

He then appealed to the military and the police by stating:

“We should all appreciate that the group (Gising Maharlika) has requested our Public Attorney’s Office (PAO) to look at this matter because it is also about protecting your rights as military and police men; because you can’t say what you want to say because you are working for the government. We hope that you are hearing this message. Our group exists for the sake of the Filipino public and that includes the military and the police.”

To watch the full video, go to this link: