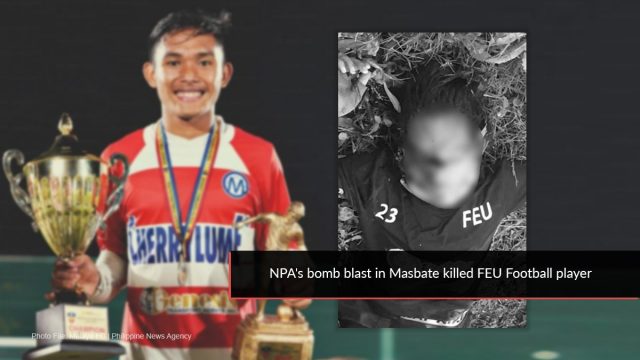 Two people found dead in Masbate City, among these individuals were the Far Eastern University’s (FEU) football team player and his cousin. It appears that the victims suffered injuries and death from an anti-personnel land mine (APM) device. These blasting devices are usually planted by the New People’s Army NPA rebels.

The presumed APM exploded while the victims were traveling on a bicycle. Currently, the Masbate City Police station did obtain information from local citizens regarding the explosion.

Police Regional Office-5 director’s Brig. Gen. Jonnel Estomo orders the deployment for the necessity of an additional police team on the location.

“All adjacent police stations were directed to conduct checkpoints.”

PRO-5 decries the NPA’s attack on the innocent victims.

“This incident is another proof that the NPA only thinks about its interests. Their violent acts spare no one. PNP Bicol is one with the entire region in the bid to end five decades of instilling fear and killing innocent lives),” as stated by Estomo.