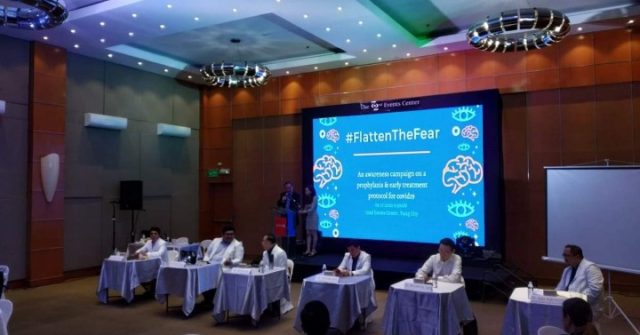 On May 20, a group of doctors, professionals, and ordinary citizens named Concerned Doctors and Citizens of the Philippines (CDCPh) issued a statement on social media regarding the callous bias of social media platforms, health experts, and government regulators in the Philippines in relation to the handling of the current alleged pandemic. They stated that the Philippine government and health authorities ignored and even discourage the Filipino public to use Ivermectin and other proven effective treatments and measures against the so-called viral disease Covid-19 (which is actually a common flu). These treatments, according to CDCPh, are cheap, readily available, safe, and effective. They stated:

“For many months now our health authorities have either ignored or advised against the use of the Essential Medicine Ivermectin, Vitamins C and D, exposure to sunlight, exercise, focused protection of the elderly and vulnerable, limited testing and symptoms-based diagnosis.”

They also stated that:

“…Filipinos today are being forced to adhere to rules that are often ineffective and costly with some even having been proven to be extremely damaging. These include city- or region-wide lockdowns and closures of our businesses, irrational and pointless quarantines of OFWs and other travelers, the scientifically baseless confinement of our children and the shuttering of their schools, the mandatory use of face shields which leave users prone to accidents, and the reliance on the notoriously inaccurate high cycle RT-PCR for diagnosis and screening.”

Much like in many countries around the world, the Philippine government’s response to the current situation is oppressive, unscientific, irrational, and utterly ridiculous and stupid. With the rights of Filipinos, especially poor, being violated since the beginning, it seems that it’s not enough for the government officials as they are now planning to implement “immoral and unconstitutional legislation” which would possibly force the public to take the experimental unapproved vaccines. These vaccines, as warned by many experts, are now injuring and even killing people in many countries all over the world.

As example to that, on early April the Department of Health (DOH) Philippines has announced the suspension of AstraZeneca as they recorded 24,823 cases of blood clots and other adverse events following Covid vaccination using Sinovac and AstraZeneca’s vaccine; 24 of these so-called adverse reaction cases are death. But in less than two weeks, however, the Philippine government has resumed the use of AstraZeneca vaccine claiming that, ironically, it is “safe and effective”. This kind of incident did not only happen in the Philippines also but also in many parts of the world; the reason why European countries also ordered to suspend their inoculation using the same brand. In addition to this, there have been more incidents of death from the Covid vaccination but reported only on social media; including the death of three senior citizens in Mindanao which has not yet appeared on mainstream news.

Meanwhile, the CDCPh’s “call to action for all Filipino leaders and citizens” finally stated:

“It is time to end this nightmare. It is time to act now to take back our lives for the sake of our children and grandchildren, the elderly and our economy. Filipinos must come together today to defend our rights and liberties, not just as patients but as law-abiding and tax-paying citizens whose lives and livelihoods have already been ruined over the last 15 months by the rudderless and incoherent management of the Department of Health. It is time for our people to demand that the President replace the Secretary of Health and the Director General of the FDA with responsible public officials who will remember that they are in their positions to serve the free and sovereign Filipino people, not to call us names, treat us like children or tell us how to run our lives. We have suffered their arrogance long enough. Our OFWs have suffered their callousness enough. Our children have suffered their incompetence, short-sightedness and possible corruption enough. God help the Philippines!”