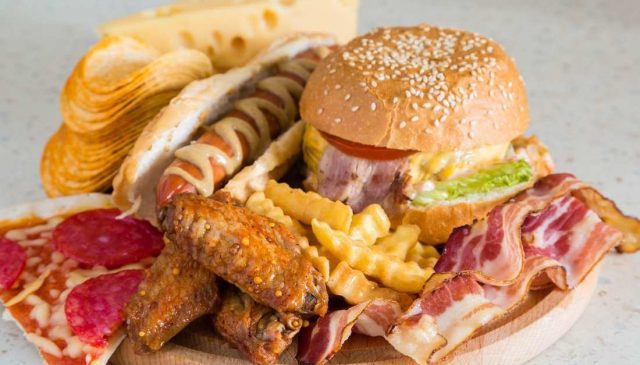 One reason why fast food is unhealthy is because these foods are full of trans fat, sodium, and sugar. Too much or frequent consumption of these compounds adversely affects our health, particularly our cardiovascular system, digestive system, respiratory system, and reproductive system. Fast foods are “food that can be prepared quickly and easily and is sold in restaurants and snack bars as a quick meal or to be taken out”. Fast food has significantly affects the health of many people these days; the reason why diseases like diabetes, skeletal issues, and heart problems are constantly increasing among the population. For example, according to Health Line:

“Today, more than 2 in 3 adults in the United States are considered overweight or obese. More than one-third of children ages 6 to 19 are also considered overweight or obese. The growth of fast food in America seems to coincide with the growth of obesity in the United States. The Obesity Action Coalition (OAC) reports that the number of fast food restaurants in America has doubled since 1970. The number of obese Americans has also more than doubled. Despite efforts to raise awareness and make Americans smarter consumers, one study found that the amount of calories, fat, and sodium in fast-food meals remains largely unchanged.”

The kinds of foods that people can buy from fast food restaurants are pastries, fries, softdrinks, hamburgers, and other things that are high in trans fat, sugar, sodium, and additives. These things have been proven again and again in many studies to be the cause of diseases we have today. Although health is a very complex issue, meaning that there are also other factors that can be causing illnesses such as high amounts of stress, fear, anxiety, anger, trauma, worries, electro-magnetic frequencies (EMF), and heavy metals, it was already clear that fast food is one of the major contributor to these problems.

Aside from these factors, fast foods are usually dangerous because they also contain aspartame (used as artificial sweeteners found in sodas, 3-in-1 coffees, etc.),  monosodium glutamate or MSG (another flavour enhancer used is various meat products), parabens (used as preservative and yeast control for jellies, jams, frozen dairy products, and even beers), potassium bromate (used in dough for pizzas and other baking products), nitrates and nitrites (used in processed meat such as bacon, salami, hotdogs, etc.), phthalates (used plastics in food packaging), propylene glycol (also used in bread, frosting, pastries, baking ingredients, puddings, ready-to-eat soups, and salad dressings), brominated vegetable oil (used as clouding agent and emulsifier for sports beverages and softdrinks), sodium benzoate (used as preservative, coloring agent, and flavour enhancer), carrageenan (used as emulsifier, preservative, and plant-based thickener usually found in coffee creamers, vegan cheese, and other vegan products), BHA/BHT (used as antioxidant in lard, butter, shortening products, chips, margarine, etc.), and propyl gallate (used in combination with BHA/BHT as preservative for frozen meals, meat products, mayonnaise, corn, and microwavable popcorn). Although getting these things to your body very rarely is not a problem, build-ups of these toxins have been proven to cause major health problems.

One way to counter the toxic build-ups caused by fast food is avoidance and second is detoxification. Our body naturally detoxifies itself but frequent ingestion of these compounds will make it difficult for our molecular pathways to eliminate them. Therefore it is very important to assist our body on its detoxification system by exercising and regularly eating natural or unprocessed foods such as vegetables, fruits, and herbs. If we do this correctly, our body can function to its full potential by efficiently removing toxins and waste products. According to innovativemedicine.com:

“Detoxification or “detoxing” is widely understood to be a mere liver cleanse with celery (or other) juice or detox supplements. Yet a true full-body cleanse is achieved when toxins are successfully flushed out from both organs of elimination and circulation. And this is only half the battle. We must then upregulate the organs of elimination (the liver, kidneys, and lymphatic system) and recover them to full functionality for sustained, ongoing natural detoxification.”

Aside from detoxification and avoiding these toxic ingredients and compounds, we must also avoid negative emotions as often as possible, have enough sleep (6-8 hours), minimize our exposure to EMF, get enough sunshine, exercise, drink filtered water, eat organic fruits and vegetables as much as we can, practice positive psychology, laugh often, practice meditation and relaxation, immerse in nature (forest bathing, relaxing at beaches, etc.), take good actions (ex. helping) toward our fellow human beings, and in general, take care of our mental health. It is impossible to be perfect in this post-modern world as we are bombarded and surrounded by these toxins and psychological stressors but being aware of these factors will surely help us minimize and regulate them.