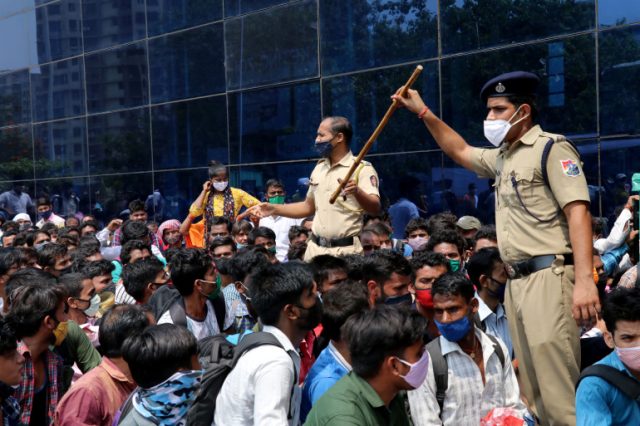 Just a few weeks ago, the biggest mainstream media such as the BBC, Reuters, and The Guardian have again published news about India, using images of people dying in the streets, people scurrying at mass bonfires, and also apocalyptic scenes of people rushing through the hospitals to save their love one’s lives from a deadly virus which have never really been isolated or proven to exist. This is of course again another fake news. What they really are is just another propaganda to scare people and make them beg for the vaccine which, according to their own words, doesn’t really stop transmission and doesn’t really protect the person. So, is that the reason why they still want you to wear masks and social distance even after having the jab?

On the 3rd of May, The Guardian published a very disturbing article with a headline “Covering India’s Covid crisis: ‘Hundreds of journalists have lost their lives’”. To the majority who are not yet aware of the real motives and dirty tactics of mainstream presses like The Guardian, of course this can be very depressive and frightening and which may also cause paranoia to the masses. Thanks to the media outlets actively fighting these kinds of propaganda like The Daily Expose; providing important news that won’t make it through the main stream. Responding to that, they wrote:

“This is a lie. The current situation unfolding in India is actually only affecting two places in particular, Delhi and Mumbai. So this is far from almost everyone in the country, a grand total of 1.4 billion people. But the main “area of concern” is currently Delhi. Step outside of these two areas and you’ll find that the rest of India is carrying on as normal.

This is just a direct quote from their own journalist, they do not provide a single source to back up this claim. This is just one of many examples in which the mainstream media are manipulating the public with words to maintain a level of fear. Words that are not backed up with a single shred of evidence.”

Of course the narrative of these media outlets is the same: everyone should get the vaccine so that we all can “go back to normal”. And obviously these companies, usually with loyal employees and shareholders who are also shill for big pharma, are the same machineries designed to direct profit through these experimental vaccines. Since early last year, we have been lied to by these companies and in all their lies, the meaning is the same; that getting the vaccine funded by the Bill and Melinda Gates Foundation, the same institution that funds them, along with other fake philanthropic organizations who are in reality just another tentacles of big pharma lurking lustfully for profit, is the absolute saviour; the key to freedom. The Daily Expose even added:

“Covaxin isn’t the only vaccine available in India, the other is Covishield which is in fact the AstraZeneca jab under a different brand name. This is being sold to the Indian State at 400 Indian Rupees a dose. This accounts for £4 in English money. Again two doses are required to complete the course, this accounts to £8 per head. Times that 1.4 billion people and the manufacturer of Covishield stands to make £11.2 billion. Who produces Covishield in India? The Serum Institute of India. Who funds the Serum Institute of India? The Bill and Melinda Gates Foundation. Who also funds ‘The Guardian” newspaper? The Bill and Melinda Gates Foundation.”

Adding to these fake news are the interviews of so-called epidemiologist Ramanan Laxminarayan who predicted that there would be “5 million severe cases and one to three million deaths in the timeline of April 10 to May 15”, based upon “mathematical modelling”. Of course much like the bogus mathematical modelling of Neil Ferguson last year, according to The Daily Expose:

But as like always, he’d been given much priority by the mainstream media. This is because he plays a major role in the fear-mongering agenda. The report continues:

“A week ago his model had predicted 5 million cases, but within a week the prediction doubled to 10 million ‘severe’ cases. He also tried to paint a scary picture- predicting an apocalypse in India, at a time when the United States itself was headed towards a major disaster.

His estimates had suggested that despite the lockdown, “about a million people would still need hospital beds and critical care.

So why do the mainstream media, directed by government agencies which are getting their orders from the WHO (which is really getting orders from the BMGF and other elites) often lie to the public? The main reason is that their real agenda are totally intolerable therefore it needs to be hidden. The want the public to accept and not ask questions about the vaccine. They only not lie about one aspect, such as the vaccine, but on the whole picture. As one example, we may look at ivermectin. If our safety and health is really their concern, then why they couldn’t easily allow the people to use it? Many clinical studies or observations proved it; with supporting documents that show how it makes a person recover from serious cleansing or de-stressing, perhaps including flu and pneumonia which are now being deliberately mistaken for non-existent Covid. So why choose vaccine instead? It doesn’t make sense.

Meanwhile, The Daily Expose left an important message to the reader:

“You are being lied to and manipulated by the mainstream media in order to maintain the level of fear which has been induced in the population since March 2020. Don’t let them cast this insidious spell over you any longer. You are better than that.”