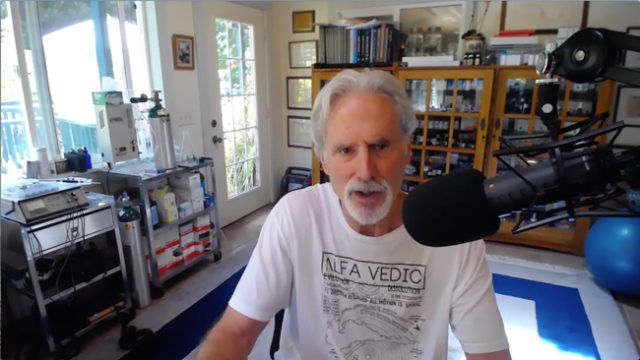 Dr. Barre Lando is the founder of Alfa Vedic, a small family run company and cooperative that produces natural health products and promotes health that is mostly outside the current mainstream allopathic paradigm; working towards the decentralization of health and agriculture. Dr. Lando is a kinesiologist-functional movement specialist who has 40 years of experience in integrative medicine, a certified permaculture farmer, and an educator for “bio-terrain medicine, soil science, and the electrical universe”.

Dr. Lando’s work is a “science-based system of functional medicine using the integration of wave-form mechanics and largely suppressed aspects of biophysics and microbiology”. And Alfa Vedic, the system that encompasses all these projects/works, is “a result of his life work that is a culmination of experiences in athletics, medicine, and farming”. Alfa Vedic helps people thrive and become self-reliant by providing knowledge about health and science/natural science that truly support organic life; in contrast to the current dominant “scientific” and medical institutions that are functioning through reliance on synthetic biology, artificial intelligence, chemicals, genetic modification/engineering, human enslavement, etc.

Though not totally, it’s evident that the so-called alternative health community today is being co-opted by the mainstream conventional medicine which uses corrupted science tainted with interests that are conflicting to our well-being and to ethics in general. In addition, the current world we live in is being controlled by the entities that perpetuate ignorance and fear using science and religion; leaving most people disempowered and bewildered. Therefore Alfa Vedic believes that “between the superstitions of “scientism” and the passivity of New Age beliefs, there lies the power to change the world”. And according to Dr. Lando:

“Without knowledge, you’re gonna be just constantly going to be searching for external things; drugs, herbs, practitioners… to fix it for you. Nobody can fix you but yourself. So in order to understand what that even means you have to understand your role as far as how you create your reality.”

Dr. Barre Lando believes that the term “disease” is a misnomer, used to provoke fear and helplessness upon people regarding their health. Most of these so-called diseases, according to him, are based on the belief that microbe causes it; the fear of germs and viruses. Dr. Lando stated:

“There’s no such thing as disease and that’s not a far out statement when you really understand where it’s coming from. In nature, there are only self-correcting mechanisms. Now, we’ve been taught that there is an entity, a separate distinct entity that exists in the natural order that is disease.”

Dr. Lando firmly believes that the symptoms we call disease are “biological programs to correct what has been thrown into an asymmetry that is no longer in balance the way nature normally design things”. Therefore, according to him, people should understand that these mechanisms, what we’ve known as illness, are our body’s way to fix itself through self-regulation. He continued:

“So in order to put things right, you not only have to understand how those biological mechanisms that we confuse with disease are provoked in the first place. But you have to know what the reasons for them are and then you have to understand the very predictable phases of those processes so that you can intervene in ways that will intelligently bring symmetry back into the internal ecology of the body and do the right thing at the right phase…”

According also to Dr. Lando, the two causes of symptoms are biological programs and poisoning or exposure to toxicity. But these so-called biological programs “are actually a healing mechanism that a knowledgeable person can work with”. And not only that, Dr. Lando explained that:

“It allows us to clear those things in the psyche then get us off the wheel of just an animalistic survival instinctual reaction…giving us the opportunity to jump from animal instincts to rational conscious behaviour. Otherwise there’d be no reason for us to be in a physical simulation in the first place. That’s the reason and the thing we call disease not only will self-correct and come full circle and get rid of the symptoms that we think is a problem but it’s also doing something on another level. In other words it’s burning up our karma and it’s giving us that opportunity…

…and the most tragic thing that the conventional pharmaceutical medical industry does is they don’t just torture you by giving you poisons that make you sicker, but they’re stymieing that progress that would allow us to become self-aware and get on with things that we’re here to do in the first place.”

To learn more about Dr. Barre Lando and Alfa Vedic, go to these links: