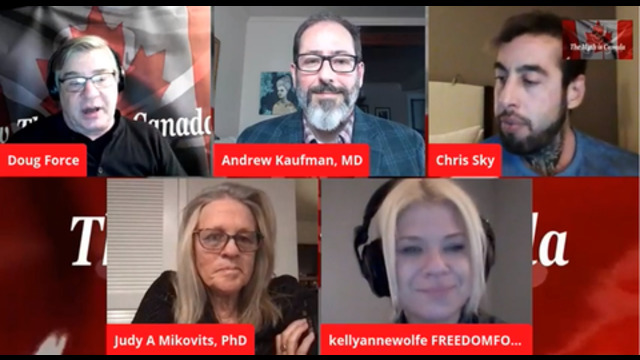 A special event roundtable regarding the SARS-CoV2 and mRNA vaccines that was published on January 21, 2021 at ‘The Myth is Canada’s’ Rumble channel ended on a debate between Dr. Judy Mikovitz, a molecular biologist and a co-author of two books entitled ‘Plague of Corruption’ and ‘Ending Plague’ and Dr. Andrew Kaufman, a forensic psychiatrist, medical doctor, and now a holistic therapist who’ve been greatly known by clearly explaining the scientific processes behind the alleged SARS-CoV2. The debate, however, was not really the supposed trajectory of the roundtable but it went on that direction.

Since the beginning, around April last year, Dr. Andrew Kaufman have been very firm that the SARS-CoV2 and other so-called disease-causing viruses that came before have never been isolated and proven to cause infection. He, along with Dr. Thomas Cowan and his other colleagues, also doesn’t believe that the current dominant scientific establishment can create a virus in a laboratory that can spread person to person. So on the said roundtable, he stated:

“I think it’s pretty clear if you look closely at the evidence that there’s no engineered virus because first of all, they can’t make one that spreads person to person and it would only basically be used in a vaccine, and that could be for future vaccine development. There’s no prima facie evidence of new illness…”

As many of us know, lockdown policies have vastly damaged the global economy and hospital protocols or medical procedures also caused massive deaths and suffering. And one of the main factors fuelling this is the people’s ignorance and fear toward the realm of virology, medicine, and diseases. Although, this may be acceptable for the reason that these are very complicated subjects to learn and mostly, only educated people in the field can understand its terminologies and technicalities. Therefore, Dr. Kaufman emphasized that people should not subscribe to the idea or paradigm of “disease-causing viruses” so that the power behind these virus scams cannot succeed. He said:

“Really, what’s most important here is that we’re all held hostage and right now part of that is taking away our rights and we all see coming intent to push this experimental technology they call a vaccine upon us. And we can see reports already of mutating viruses, we’ve heard of second and third waves and we’ve heard of a Covid 21. And the thing is as long as we all embrace this false virus paradigm, that viruses are particles that cause disease from the outside, we’re gonna be vulnerable to the next pandemic and the next one after that and the next one after that just like all the ones that came before it that were all fake in just the same way.”

Judy Mikovitz maintains that she and other scientists “have isolated viruses and retroviruses” and that this is what her works are about. However, Dr. Kaufman does not agree with this and explained that he read Dr. Mikovitz paper:

“I don’t agree with Judy (Mikovitz) on this point, we definitely do not agree although she keeps saying that and also I reviewed her papers and I have not found one paper that does what I’m about to say. And I want everybody out there to know that you do know the word “isolation”; it’s a very simple word, you can look it up in the different dictionary and it means “to separate from everything else”. And there’s no other way to know that you actually have a thing, a new thing that’s never been known before unless you separate it from everything else and look at it by itself and characterize it. And that has never been done for any alleged virus particle that causes disease in humans, not once. And I’ve scoured the evidence. Now if Judy (Mikovitz) can show me the paper and show me the photographs and the written procedure and the real way to isolate it by the common human definition that we all know, not mix it with a bunch of things and a toxic cell culture and show it budding out of cells where it’s not isolated; so if she has that proof I would certainly retract everything I say. But if she’s not gonna have it because I’ve looked very hard and my colleagues have looked as well.”

“…we have to destroy this paradigm of “viruses that cause disease” because this is the “bogeyman” and this is what is causing the fear and panic that’s allowing us to be manipulated. So we have to stop this, we have to throw it out. And all you need to do is just understand what I just said and then go look in the literature at what they say proves viruses exist and you’ll see that it doesn’t even come close.”

Meanwhile, 8 days later, Dr. Kaufman and his colleague Dr. Thomas Cowan published a video response to Dr. Judy Mikovitz at his lbry.tv channel. In the beginning of the video, Dr. Cowan explained:

“The other interesting thing is, this has a long history. In fact, this whole process called “viral culture” was inaugurated by a virologist, I guess named John Enders… Apparently Enders was aware that this viral culture/method of isolation he was using was not actually proven to be accurate.”

He then quoted Enders:

“Rockwell (?) has reported similar findings and in addition has isolated an agent from monkey kidney tissue that is indistinguishable from the human measles virus. The problem, however, of the origin of the agent responsible is unknown…

There is potential risk in employing cultures of primate cells for the production of vaccines composed of attenuated virus since the presence of other agents possibly latent in primate tissue cannot be definitely excluded by any known method.”

After that he did a follow up to the statement of Enders by reading some parts of a 2020 scientific journal regarding virus isolation:

“Here’s a paper that I found which was published in a journal called “Viruses”, this is May 2020, it’s called “The Role of Extra-cellular Vesicles As Allies of HIV, HCV (Hepatitis C virus), and SARS virus”…the final paragraph says: “however, today a reliable method that can guarantee a complete separation…”, meaning of breakdown products from the cell from viruses, “does not exists”.

So 70 years after doing the studies, they cannot tell you whether these things that, the scientists for SARS-Cov2, the scientists for HIV, the science papers that Dr. Mikovitz did are actually independent pathogenic viruses or simply the breakdown products of starved and poisoned tissue including milk, including whatever was in the original sample; including fetal bovine serum and including monkey kidney tissue.

On the same video, Dr. Andrew Kaufman then supported Dr. Cowan by explaining:

“The paper that you’ve read from Enders is actually a review of a series of experiments that he’s done in the 1950’s and I believe the original experiment was in 1954. What Enders concluded in the seminal paper is that what he saw in the laboratory in this so-called culture experiments doesn’t have any, there’s no ground to say that that’s what’s happening in the person. In other words if they think there’s a virus in this culture causing damage to the cells doesn’t mean there’s a virus in the person causing damage to their cells. So in other words he recognized that this experiment do not prove any causation between a virus and an illness.”