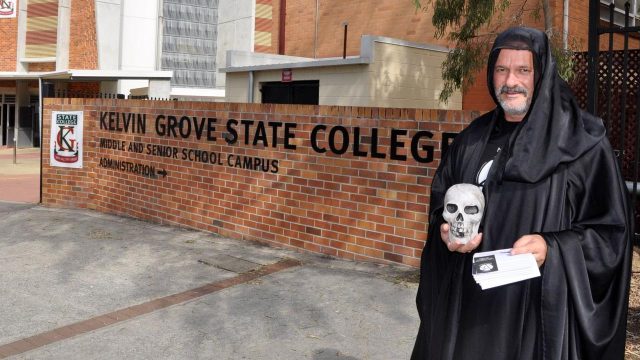 The Noosa Temple of Satan in Queensland, Australia has announced that “at least two families have officially requested that their children be provided Satanic religious instruction (RI) in Queensland’s public schools”. According to them, the two families, one family is from Wilston State School and another is from Centenary State High which are all Brisbane-based schools, have passed a letter to their school principal informing them that “their children are to receive instruction from the Noosa Temple of Satan during school time”. According to their Facebook announcement posted last January 13:

“Under Queensland law, our spiritual leader Brother Samael Demo-Gorgon will be able to enter these schools to provide one-hour scripture classes – just as Christian missionaries do! And the principals will not be able to refuse Brother Samael entry to school facilities. The Satanic lessons will occur during class time and non-Satanic kids will have to leave the room and stop normal lessons while Satanism is taught.”

Meanwhile, the Education Minister of Queensland Grace Grace stated in the news interview that she would not allow that Satanism will be taught in schools. However, under Queensland law, Satanists have the same right as Christian ministers to enter public schools to give sermons and preach their religious philosophy. Therefore knowing that they have the right to exercise their religious freedoms, the Noosa Temple of Satan spiritual leader Brother Samael Demo-Gorgon has confidently stated on 7News:

“Well, Grace Grace, we’ve got news for you. It’s going to happen on your watch.”

He also said on the same interview:

The parents who have already signed up are doing a wonderful thing in ensuring the right of their children to access our classes under Queensland law. This achievement is proof that our great plans for the principality of Noosa and the whole state are starting to come to fruition.”

A week after the Facebook announcement, the Noosa Temple of Satan also successfully managed to put the pentagram sign at the Sunshine Coast University Hospital’s multi-faith centre. While waiting for the final approval of the proposed curriculum, Samael Demo-Gorgon is also preparing while developing the curriculum which, according to their announcement, will explain who is Satan, how Satanists can become school ministers, how do Satanists decide which or what is good and what is evil, etc. They also propose that instead of “Lord’s Prayer”, council meetings should have “satanic invocation”.

It was stated on their website that the Noosa Temple of Satan “is dedicated to challenging the privileges that traditional religions enjoy in Australia”. They claim that these so-called traditional religions have “negatively influenced” Australia’s schools and government institutions on a massive scale; using their power “to indoctrinate young minds and gain undemocratic advantages for themselves”. It also continued:

“In order to challenge the special privileges that traditional religions currently enjoy, we intend to apply for the same privileges. We recognise that many people are shocked by Satanists and strongly object to our presence. We intend to use that shock to highlight existing religious privilege. We hope that empathetic Christians will come to understand that non-Christians may be equally offended by Christian activities and it would be fair and best for everyone if religious activities retreated from the public arena to private homes and churches.”

Meanwhile, on February 6, 2021, the group’s Facebook page posted an announcement regarding their supporter’s statement, strongly criticising Grace Grace’s objection to their proposal. For example, a user and supporter named Adam Spicer posted:

“How dare you openly declare that only Christians are entitled to the privilege of religious instruction in schools. People should be free to practice whatever religion they identify with and be instructed by a member of their own religious congregation. Christian privilege has gone on too long. Bring on true religious freedom!”

“What is your religion? Why are you banning one religion from operating in schools when a letter to Tony Magrathea clearly states that the law allows a religion to be taught. You seem to now be in breach of S116 of our Australian constitution – got any good barristers working for you – they will tell you that you are breaking the law.”

“Stop suppressing the religious beliefs of me and my fellow Satanists. In a secular democracy you can’t preference one religion over another.”