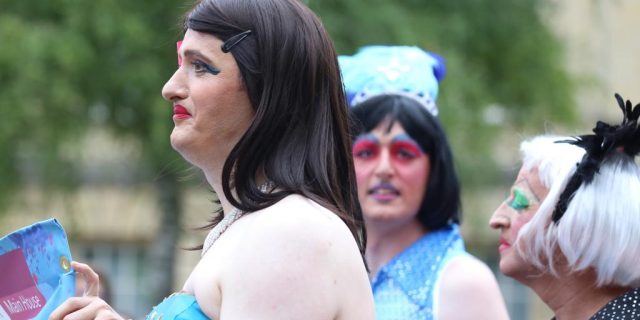 Just recently, House Democrats in the US proposed a bill that would require house members to use “gender-neutral language” and prohibit the use of traditional terms such as “father, mother, brother, sister”, etc. in the congress. This is a continuation of the on-going radical campaign of transgender advocates to change every idea, situation, and even law or policies that they deem politically incorrect even though it directly affects people’s rights or prohibit free speech. In any ways possible, these transgender activists demand compliance and special treatment to society and to different areas of institutions such as sports, medicine, entertainment industry, and politics even if it will lead to chaos and confusion.

Oppositions from different areas of society reacted to the news though most of them were not surprised, given that they predicted this coming down the pipe a long time ago. The resistance against the transgender political agenda is not just mere subjective or philosophical concern, it is grounded on science and on the way social structure is organized. Therefore, many experts are actively pushing back against this agenda as they clearly see problematic aspects that do not only affect adults but including young people; the generation we must protect and cultivate, instead of destroy, for the future of our specie. For example, a paediatrician named Dr. Michelle Cretella, who is also the executive director of the American College of Pediatricians, once stated:

“No one is born transgender. If gender identity were hardwired in the brain before birth, identical twins would have the same gender identity 100% of the time. They don’t…

…when supported in their biological sex through natural puberty, the vast majority of gender-confused children get better. Yet, we are chemically castrating gender-confused children with puberty blockers. Then we permanently sterilize many of them by adding cross-sex hormones. Cross-sex hormones are estrogen and testosterone. Those put young children at risk for heart disease, strokes, diabetes, cancers, and even the very emotional problems that experts claim to be preventing.”

If we as adults really want to protect and nurture younger generations, which we must because they are the ones who will be in-charged in the future, we must reconsider how we see medicine affects them, both subjectively and physically. But what has been happening for years is that the mainstream medical establishment apparently does not consider these aspects anymore. As what Dr. Michael Laidlaw, an endocrinologist in Rocklin, California has raised:

“In my practice as a physician, I always look at side effects of medications before I give anything to anyone. Say, for diabetics, I always tell them, “if you could work on your diet and exercise first, I’d rather have you do that than take these medications because there’s side effect and there’s problems that are potential, but if you need it, then you need to take it…

With these, I see no need to take medications, I see the risk as being very high, and I see children as a very vulnerable population who can’t speak up for themselves and their parents are often propagandized by this movement….”

Meanwhile, speaking about the overlooked consequences of medical interventions by the transgender movement and also the censorship and the lack of sincerity from the authorities of the scientific and medical establishments, Dr. Marian Rutigliano, an emergency medicine specialist, stated:

“I did a residency in internal medicine, a fellowship in critical care. I practiced emergency medicine for a number of years. I currently work evaluating research on the human health effects of toxic chemicals. There’s not a coherent body of well-researched literature that’s been collected over the years. There are no long term studies, or very few long-term studies. The studies that there are really do not show very promising results, but most doctors aren’t aware of those. Doctors are human beings. You want people to feel better. You’re kind of busy, you don’t know all the controversy surrounding it. Controversies are suppressed.”

In Vermont, a transgender named Taylor Small has been elected for state’s House of Representatives. In a report, Life Site News wrote about Taylor’s works and campaigns:

“A reader in Drag Queen Story Hours, the program run in thousands of libraries across the country that normalizes LGBT pathologies by facilitating interaction between children and men dressed up as garish caricatures of women.

Promises to “integrate the full scope of all ethnic, racial, gender and other marginalized identities into K–12 curriculum,” according to his official platform site.

Seeks to get full insurance coverage of transgender mutilation procedures in Vermont.

Also in this month, another transgender named Sarah McBride has been elected for state senator in the Delaware, USA.”

Meanwhile in Delaware, another transgender named Sarah McBride has been elected as senator; making her the first transgender state senator and the highest-ranking transgender official. And regarding McBride’s accomplishments so far, Life Site News reported:

Helped to get Delaware to force insurance companies to pay for massively dangerous and destructive “gender reassignment” surgeries.

Opposed a version of a Delaware bill that would have prevented schools from providing pro-transgender “counsel” to minors without parental notification.

Helped direct an anti-family organization in Delaware that successfully argued for taxpayer-funded hormone injections for prison inmates, among other things.”

“In 2019, House Democrats passed a bill that would establish the transgender ideology by giving people the legal right to force other people to treat them as members of the opposite sex. The draft bill is called the “Equality Act” and will get another vote in 2021. In the United Kingdom, the right-of-center Conservative Party has rolled back plans to promote the transgender ideology. The shift was caused by rising opposition from a wide range of voters and by increasing evidence of medical damage to girls and boys, women and men.”