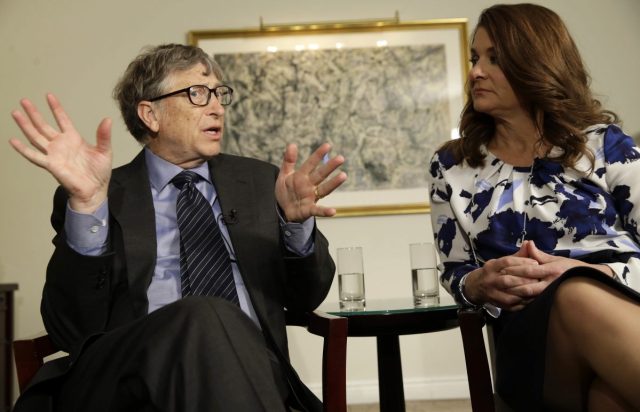 The Land Report confirms that Bill Gates and his wife Melinda Gates are now the largest private owners of farmland in the US. According to them:

To some, this isn’t surprising given that the couple, through their Bill & Melinda Gates Foundation (BMGF), have been raking billions of dollars for years as returns for their various investments. These investments, however, come with countless problems that people in many countries face. For example in 2007 to 2010, the BMGF donated almost $20 million to the International Rice Research Institute (IRRI) for its so-called “fortified rice varieties” project. In addition, the BMGF also financed at least $100 million to the Alliance for a Green Revolution in Africa (AGRA), for the purpose of, according to them, combatting food shortages. However, for those who are watching this so-called development initiative, that isn’t really their aim. According to Vandana Shiva, the founder of Navdanya, an organization “working for thirty years in defence of biodiversity and local seeds”:

Meanwhile, explaining further on Bill Gates’ way of philanthropism, Vandana Shiva wrote in her latest book “Oneness versus the 1%”:

“Health is about life and living systems. There is no ‘life’ in the paradigm of health that Bill Gates and his ilk are promoting and imposing on the entire world. Gates has created global alliances to impose top-down analysis and prescriptions for health problems. He gives money to define the problems, and then he uses his influence and money to impose the solutions. And in the process, he gets richer. His ‘funding’ results in an erasure of democracy and biodiversity, of nature and culture. His ‘philanthropy’ is not just philanthrocapitalism. It is philanthroimperialism.”

Navdanya has been following how the BMGF, along with other giant pharmaceutical, chemical, and agricultural corporations (such as Monsanto), are using their money to consolidate initiatives and schemes that designed to establish and perpetuate “industrial monoculture model” for their own interest. Through this, these entities have also secured ownership of seeds through patenting with their genetic engineering or gene editing techniques (biopiracy). As reported by Navdanya:

“Global development then becomes an important field for profits, with the awareness that controlling the markets means controlling the lives of billions of people. Based on this logic, the BMGF finances, under the banner of philanthropy, everything that is in line with its interests: from the media to research, from universities to start-ups, from the development programmes of international institutions to governmental ones. In addition, the Gates foundation often co-invests with other giants in the food industry, the fossil fuel industry, the pharmaceutical industry and Big Tech.”

Meanwhile, assessing the impacts of this tactic by the BMGF and its cohorts, Vandana Shiva added:

“We have seen the Green Revolution and the industrial agriculture model fail, wiping out forests, transforming the land into a monoculture, causing pollution and illness, destroying natural resources and livelihoods…

Indeed, their methods have been proven to be the opposite of what they’re claiming. And now that we are on the first year of this fake coronavirus pandemic, it’s clear that the measures they impose upon us do not really serve our interest but instead, it pushes us further to poverty, famine, and powerlessness. It enables more the oppressive governments and corporations to take advantage and design programs that strengthen control over the population; bringing them more profit and kickbacks in return. And more importantly, in the guise of public health and safety, it also allows the pharmaceutical companies to push their synthetic and experimental drugs and vaccines harder unto the public, despite the fact that more and more reports of severe side effects and even deaths are coming out. These damages being inflicted upon us can be seen in almost every aspect of our lives. As Vandana Shiva explained:

“As we clear-cut forests, as we turn farms into industrial monocultures that produce toxic, nutritionally empty commodities, as our diets become degraded through industrial processing with synthetic chemicals and genetic engineering, and as we perpetuate the illusion that earth and life are raw materials to be exploited for profits, we are indeed connecting. But instead of connecting on a continuum of health by protecting biodiversity, integrity, and self-organization of all living beings, including humans, we are connected through disease.”