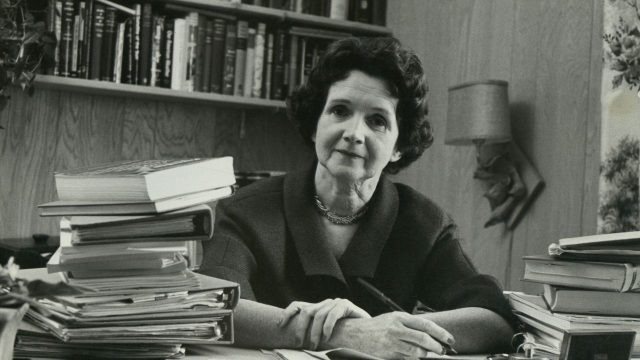 Rachel Carson is regarded as one of the main inspirations for the modern environmental movement. Although, there are no accounts of her direct involvement to any so-called environmental movement of her day, except to her colleagues who helped her in learning, interpreting, and creatively delivering the scientific information they’ve collected from the studies and observations being conducted by both the private and the government institutions. Aside from being an effective and passionate writer, Carson was also a person of science; she’s a marine biologist and a very intelligent woman who understood and was able to feel the meaning of transcendental wonders that humans experience in nature’s realm. She once wrote:

“But man is a part of nature, and his war against nature is inevitably a war against himself.”

In her Wikipedia biographical account, this is what it says about her real contributions:

“Carson’s work had a powerful impact on the environmental movement. Silent Spring, in particular, was a rallying point for the fledgling social movement in the 1960s. According to environmental engineer and Carson scholar H. Patricia Hynes, “Silent Spring altered the balance of power in the world. No one since would be able to sell pollution as the necessary underside of progress so easily or uncritically.” Carson’s work, and the activism it inspired, are at least partly responsible for the deep ecology movement, and the overall strength of the grassroots environmental movement since the 1960s…”

If there is any direct contribution by Rachel Carson to the environmental movement, it was her works that led to the campaign to ban DDT in the US, which was initiated through the formation of the Environmental Defense Fund in 1967. Five years later, the US banned the use of DDT. Then soon came the investigation and regulation for other chemicals as well, especially pesticides. Later, other countries followed. Her research and writing works, specifically about pesticides, were inspired by the federal government’s “gypsy moth eradication program” of 1957, in which she understood the science, the consequences or the high risks of using toxic pesticides; being mandated by the government. This has pushed her further to publish books to address more urgent environmental concerns. The gypsy moth eradication program was described as such:

“The gypsy moth program involved aerial spraying of DDT and other pesticides (mixed with fuel oil), including the spraying of private land. Landowners on Long Island filed a lawsuit to have the spraying stopped, and many in affected regions followed the case closely. Though the suit was lost, the Supreme Court granted petitioners the right to gain injunctions against potential environmental damage in the future; this laid the basis for later successful environmental actions.”

Carson’s six years of study and documentations has led her to finish the Silent Spring, a book that depicted stories of communities which use DDT and has resulted to dire and even fatal consequences; damaging not only wildlife and domestic animals but also humans and the natural order of essential organisms, including insects, in their particular habitat. After Silent Spring was published in the summer of 1962, many institutions and people in positions praised Carson’s work as they were truly enlightened by the not so common information that the book delivers; especially by the serious consequences of human’s ignorance and negligence towards pesticide administration. Though along with this, Carson also received harsh blowbacks and even nasty personal attacks especially from the chemical industries and their puppets in the government positions, vilifying her for exposing the truth DDT; even to the point of blaming her for the death of millions allegedly died because of malaria due to the banning of such chemical.  But on the other hand, many experts and organizations also protected her; some even defends her and carry her legacy even up to this day.

“Until we have the courage to recognize cruelty for what it is — whether its victim is human or animal — we cannot expect things to be much better in this world. We cannot have peace among men whose hearts delight in killing any living creature. By every act that glorifies or even tolerates such moronic delight in killing, we set back the progress of humanity.”

A decade later after the publication of Silent Spring, the environmental movement has learned more and grew stronger; mainly inspired by Carson and her colleagues strong and powerful words and actions which resulted to successful campaigns. Also as an effect, so-called experts, major establishments like big science, and government research agencies were questioned more often by the thinking masses, demanding more responsibility and transparency. But aside from these positive outcomes:

“Silent Spring suggested a needed change in how democracies and liberal societies operated so that individuals and groups could question what their governments allowed others to put into the environment. Far from calling for sweeping changes in government policy, Carson believed the federal government was part of the problem. She admonished her readers and audiences to ask “Who Speaks, And Why?” and therein to set the seeds of social revolution. She identified human hubris and financial self-interest as the crux of the problem and asked if we could master ourselves and our appetites to live as though we humans are an equal part of the earth’s systems and not the master of them.”

Rachel Carson’s wonderful passion for writing and for the environment can be observed not only through looking at the success of Silent Spring. Before this title, Carson published a very informative and entertaining trilogy about marine biology; telling the stories of the vibrant lives of diverse marine species and the ocean itself. Her masterpieces, entitled Under the Sea Wind (1941), The Sea Around Us (1951), and The Edge of the Sea (1955), have also enjoyed numerous awards from different institutions and received huge positive feedbacks. The books taught people about the life of the creatures in the ocean and inspired them to appreciate its wonders and other things, including the never ending play of energies, the intrinsic mathematics and the universal patterns that bound all things, the eternal growth and decay, birth and death of its inhabitants, waves and currents, and the endless vibrancy and diversity of life which depend on this ecology. Because of this, Carson earned the title “biographer of the sea”.

Because of her wonderful contributions to society and to our relationship with the natural world, Rachel Carson was considered as one of the most important activists and intellectuals of our time. She also received tens of posthumous honours during the later years and some institutions were established after her legacy. Indeed, her works are very relevant even up to today and therefore deserve more consideration and appreciation, especially from audiences who aren’t so educated about the subjects she tried to sincerely raise. Appreciating the wonders and the powers of nature, Carlson herself wrote:

“Those who contemplate the beauty of the earth find reserves of strength that will endure as long as life lasts. There is something infinitely healing in the repeated refrains of nature — the assurance that dawn comes after night, and spring after winter.”